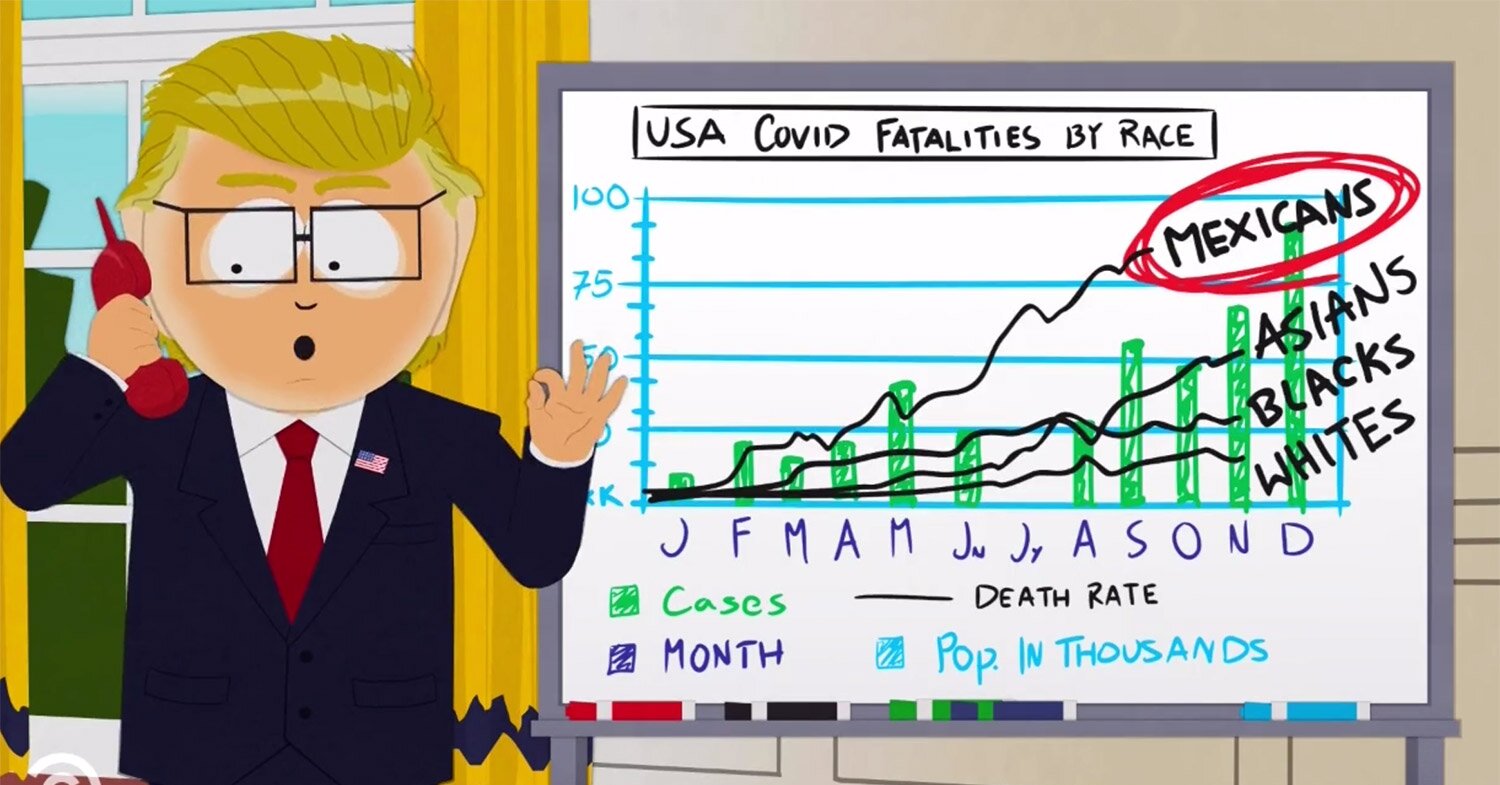 Surprisingly sincere episode: “I just want my life back.”

South Park‘s one-hour “Pandemic Special” episode managed to mock nearly every aspect of our current moment, but reserved its perhaps most scathing rebuke for President Trump.

While many have characterized the Comedy Central series as having an increasingly libertarian or conservative bent in recent years — particularly as it’s ripped into political correctness — Wednesday’s episode unreservedly blasted Trump for his handling of the COVID-19 crisis.

Midway through the episode, Trump is portrayed as lounging in the Oval Office refusing to take calls from crisis experts. Stan Marsh manages to get through and explains that Trump might be able to stop the pandemic if he visits the town of South Park. The president refuses, noting that he “made a promise to the American people to get rid of all the Mexicans.”

When Stan notes that COVID kills more than just Latinos, Trump says that the virus is “still killing a lot of them” and then pulls out a chart showing how the coronavirus disproportionately impacts people of color. “All I have to do is guide the avalanche in the right direction and I’m fulfilling my promise to the American people,” Trump explains. “I was doing a crap job until this pandemic happened.”

“You’re just going to sit there and not do anything?” Stan asks, bewildered.

“I’m going to actively not do anything,” Trump replies. “And you can… die.”

(The chart isn’t accurate, but it’s true that Blacks and Latinos are disproportionately impacted by COVID-19 in terms of the number of cases and deaths, as NPR broke down in several charts last week).

At the end of the episode, a cure for COVID-19 is finally found. But Trump blasts the scientist with a flame thrower to prevent the cure from being released. In an unusual moment of advocacy for the ever-facetious series, Trump reminded viewers to vote this fall.

The show also took on police violence, with South Park cops going on a rampage, accidentally shooting a Black student (and covering it up) and murdering kids caught out after curfew.

Disney was also a target, with the pandemic’s origins traced to Mickey Mouse’s wild R-rated trip to China with Randy Marsh. “It’s your fault Mickey Mouse!” Randy rants to Mickey. “You made a deal with the devil when you sold your Mulan s— to China, and you told me how great China was and how we should suck that d—. You made me lose my integrity!” Disney has come under fire for filming part of the movie in the same province where China has forced millions of Muslims into internment camps.

Other targets were hit as well, such as panic buying, improper mask-wearing, social distancing, and Zoom sessions.

During the episode’s climax, Stan gives a tearful (and, truth be told, rather emotionally effective) speech when he laments the pandemic and its devastating psychological impacts.

“I can’t take these shutdowns anymore and I’m scared what it’s doing to me,” he says. “I’m looking for who to blame — saying I’m trying to help people to make myself feel better. The truth is I just want to have fun again. I wanted to see that I could go out in the world and do things I used to do, but I can’t. I’m not any better and I don’t care any more than anyone else. I did all this because I just want my life back. I just want my life back.”