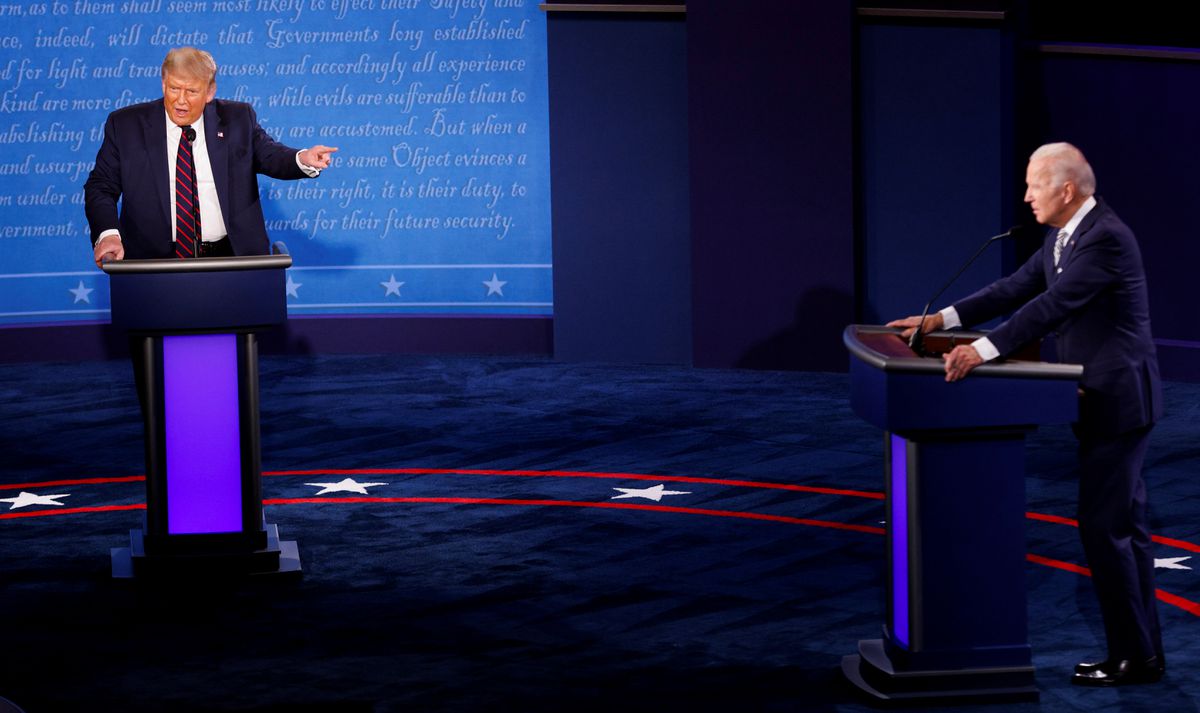 It was billed as a debate. It was a slugfest. It was designed to provide a civil discussion on civic issues. The two nominees for the highest American office accused each other of obfuscation, or worse. By the time they were finished there was blood on the floor – but voters may be left with the sad conclusion that there is no floor to the way politics in the United States is conducted.

Nearly two-thirds of a century ago, Adlai Stevenson, the two-time Democratic nominee, proposed presidential debates such as the one a bipartisan commission conceived for Tuesday night’s 98-minute session in Cleveland. “Imagine discussion on the great issues of our time with the whole country watching,” the former Illinois governor said of an innovation that he believed would “transform presidential campaigning into a great debate conducted in full view of the people.”

That kind of debate may have occurred in a handful of earlier presidential debates. But not Tuesday night.

President Donald Trump taunted former vice-president Joe Biden by saying, “There’s nothing smart about you, Joe.” Mr. Biden said his rival was “a fool,” a “clown,” a “racist,” and “a liar.” Mr. Trump said to Mr. Biden, “For 47 years you’ve done nothing.” Mr. Biden said to his opponent he was the “worst president America ever had.”

When the two stopped trading insults – when Mr. Trump finished calling Mr. Biden’s plans a “disaster” and Mr. Biden stopped saying to the President, “Will you shut up, man?” – voters in the United States and viewers in Canada and around the world saw two figures who did not veer from their familiar playbooks, or their profiles, or their positions in a debate full of conflict, contention and utter rhetorical chaos.

Mr. Trump spoke like a bulldozer, plowing through his points and over Mr. Biden. He accused the Democrat of veering left into socialism, asserted his business interests were in solid shape, argued he took advantage of existing personal tax provisions, and said Mr. Biden’s plans would bring on “a depression the likes of which you have never seen.” With a style shaped in brutal business negotiations, reality television shows and 14 primary and general election debates in 2015 and 2016, he brought that approach and those lessons to the political stage.

For his part, Mr. Biden in three presidential campaigns going back a third of a century had dealt with rivals who basically agreed with his broad outlook and philosophy and, in many cases, with whom he had worked genially over the years on difficult political challenges in a legislative chamber with centuries-old codes of conduct, a social compact of comity.

Tuesday night’s contest was without established customs of comportment against a man he had never consorted with before and possessed of a personal profile and pugilistic style unlike anything that he had ever encountered. For 36 years, beginning with his introduction to political Washington at age 30, Mr. Biden shaped his public style from the manual of parliamentary behavior written by Thomas Jefferson in 1800 that opens with a chapter titled “The Importance of adhering to Rules” and that prohibits what the Senate described, in a rule adopted in 1806 and honoured ever since, as “exceptional words.”

In those pages there is this provision: “No one is to disturb another [person who is speaking] by hissing, coughing, spitting, speaking or whispering to another.” The moderator, Chris Wallace of Fox News, especially chided the President for repeated interruptions and at one point said of Mr. Trump’s traducing of the rules of civility to which the two sides agreed in advance, “Why don’t you observe what your campaign agreed to?”

Amid the imprecations and implications, faint signs of the two candidates’ strategies were visible.

In his remarks on the nomination of Amy Coney Barrett to the Supreme Court, Mr. Biden shaped his answer to female voters, emphasizing the impact her decisions would have on abortion rights and, specifically, pre-existing conditions for women. The Washington Post/ABC News Poll released Sunday showed Mr. Biden leads Mr. Trump among women by 31 percentage points. Mr. Trump’s defence of his economic policies stressed the recoveries in Ohio and Michigan, two states vital to his re-election, and his remarks on law and order emphasized safety in the suburbs, where many analysts believe the election will be decided.

One omission will play out over the next several days: Mr. Trump’s refusal to make an unambiguous condemnation of white supremacy.

The two men did conform to one rule set out for the debate. They did not shake hands either at the beginning or the conclusion of the session. The Commission on Presidential Debates need not have ruled out the handshakes customary for the conclusion of business meetings, for the Stanley Cup Final and for political debates in the United States, Canada and in most democracies. The custom dated to 5th century B.C. in Greece and endured as a symbol of peace and civility. There is little of each in today’s United States, and none in Tuesday’s presidential debate.