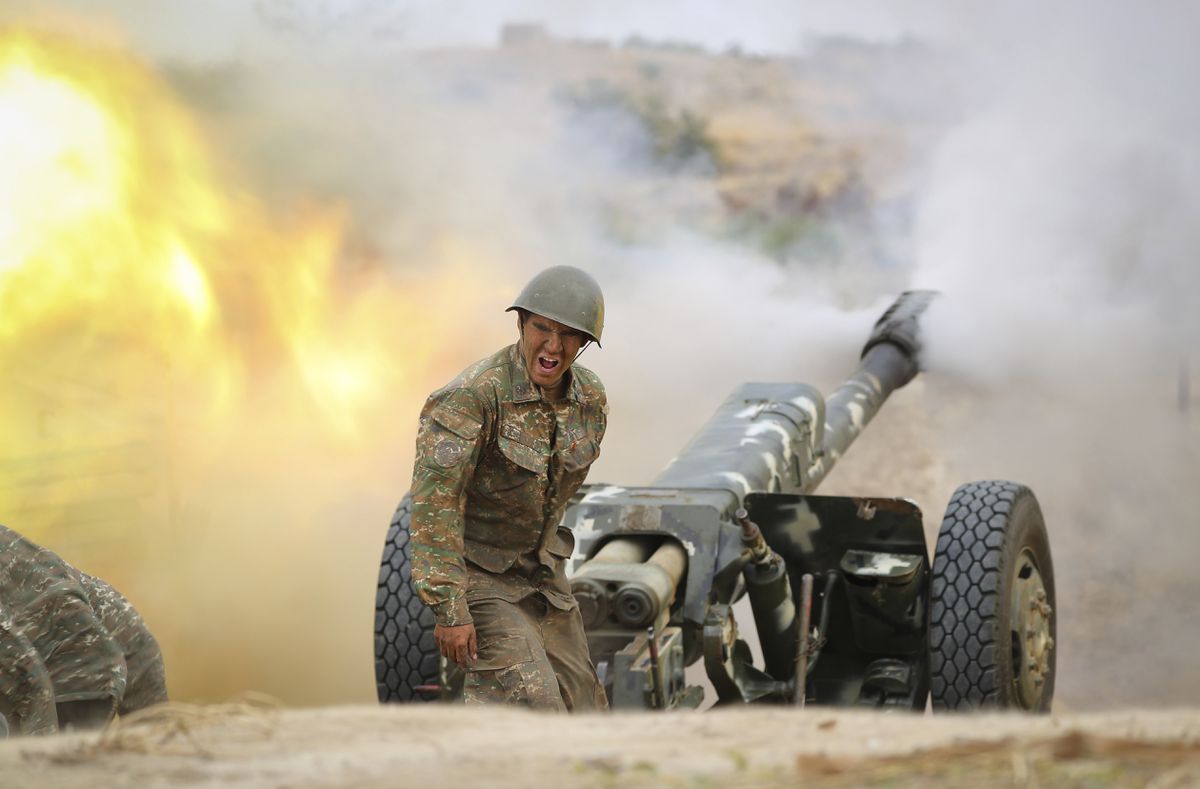 The federal government said it is investigating allegations that made-in-Canada imaging and targeting systems are being used by Azerbaijan in a growing conflict with Armenia.

Questions are being raised about gear by L3Harris Wescam, a company in Burlington, Ont., that makes sensor systems containing laser designators to paint targets for laser-guided bombs launched by drones or fighter aircraft.

Arms-control advocates have documented the sale of Wescam sensor systems to Turkey, a staunch ally of Azerbaijan.

Hostilities between Armenia and Azerbaijan, two former Soviet republics, have escalated over the past three days, with dozens killed and injured in heavy fighting.

“We are aware of the allegations made that Canadian technology is being used in this conflict,” Global Affairs spokesman Michel Cimpaye said in a statement to The Globe and Mail on Tuesday.

“The Minister of Foreign Affairs immediately directed our officials to investigate these claims.”

Earlier this week, Foreign Affairs Minister François-Philippe Champagne issued a joint statement with his British counterpart voicing “deep concern” over reports of large-scale military action in Nagorno-Karabakh, a disputed territory between Azerbaijan and Armenia, and calling on both sides to “disavow violence.”

In the latest incident on Tuesday, Armenia said one of its warplanes was shot down by a Turkish fighter jet in what would be a major escalation of the violence. Both Turkey and Azerbaijan denied it.

Turkey uses Wescam sensor systems to equip various military drones. L3Harris Wescam’s proprietary graphical overlay is visible on footage of air strikes released by the Turkish military, and its gear is visible on drones operated by the Turks.

Turkey has been accused of violating international humanitarian law with indiscriminate air strikes that harm civilians, including in northeast Syria.

At least one of the same type of drones appears to be active in the Azerbaijan-Armenia conflict.

In July, Azerbaijan’s Defence Minister announced the country would purchase Turkish drones. Defense News, a global website and magazine, reported at the time that Azerbaijan was interested in Bayraktar TB2 drones, manufactured by a joint venture that includes Turkey’s Baykar Technologies, which routinely include Wescam imaging and targeting sensor systems.

Footage of missile strikes by Azerbaijani military from Sunday posted on the internet contain a graphical overlay on the video that bears a very strong resemblance to the proprietary graphical overlays of systems manufactured by L3Harris Wescam. Turkish defence contractor Baykar’s official Twitter account has tweeted expressions of support for Azerbaijan including the flags of both countries and the statement: “We are one nation: two states.”

“Judging by segments of the graphical overlay visible in Azerbaijani airstrike footage, it appears that the Azeri Air Force is employing Canadian-made Wescam systems in the conflict.

“There’s no public record of Canada exporting these sensors to Azerbaijan. On the other hand, we have recently seen Turkey hand off Wescam hardware to its allies in Libya, in glaring contravention of Canadian and international export controls. This leaves the worrying yet likely conclusion that Turkey could be repeating this behaviour with Azerbaijan.”

The Armenian National Committee of Canada, a grassroots organization representing the Armenian diaspora in the country, said in a statement Tuesday that it believes “Canada is effectively becoming complicit in the crimes committed by Azerbaijan and Turkey.”

Officials at Wescam and its parent company, L3Harris Technologies, did not immediately respond to a request for comment. The Turkish embassy in Canada, asked whether TB2 drones are being used in the conflict, did not immediately answer but instead sent links to stories that it said document “Armenia’s aggression against Azerbaijan.”

NDP foreign affairs critic Jack Harris urged the government to conduct a “full investigation as quickly as possible” and pay close attention to what kind of restrictions and conditions are placed on Wescam exports to Turkey.

He’s concerned that Turkey may be diverting Wescam technology to Azerbaijan in violation of the conditions of the export permit from Canada.

Last October, Ottawa announced a freeze on issuing new export permits for military shipments to Turkey, echoing similar moves by European countries after incursions by the Turks in northern Syria to attack Kurds.

In April, the federal government said it would resume accepting export permits, but said companies should expect that requests to ship Group 2 items would be denied. Group 2 is one of nine categories of military goods and includes the imaging and sensor systems that Wescam manufactures. The government said, however, that there would be exceptions for North Atlantic Treaty Organization “co-operation programs.”

Project Ploughshares said Statistics Canada data show exports to Turkey of the kind Wescam makes dropped off after the moratorium, but began trending upward again in the spring.

The federal government Tuesday declined to say whether it was concerned that Canadian military technology might have been diverted to Azerbaijan.

“We are monitoring the ongoing situation very closely, and all new permit applications for controlled items, regardless of the destination, will continue to be reviewed under Canada’s robust risk assessment framework,” said Mr. Cimpaye, the Global Affairs spokesman.

With a report from Reuters