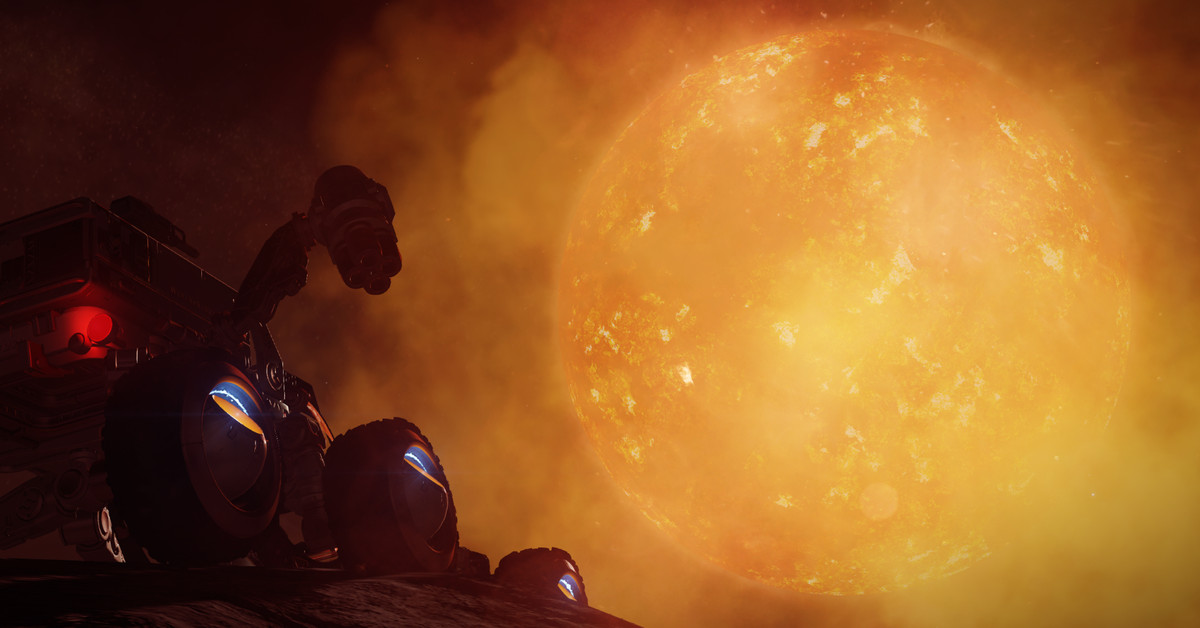 First-person combat and exploration is just the beginning

Elite Dangerous is a comically large video game, with more than 400 billion star systems in all. It’s so big that players have only ever seen .042% of it with their own eyes. With Elite Dangerous: Odyssey, the game’s first paid expansion in more than five years, developers are adding even more to discover. The upgrade will allow players to traverse billions of worlds on foot for the first time, leaving the comfort of the game’s traditional vehicles behind entirely. But that’s not all.

The team at Frontier Developments is also adding entire new systems of gameplay. They will focus on first-person combat, solitary exploration, and even stealth in built-up areas. Supplementing that experience will be new social spaces — tens of thousands of them — plus entirely new settlements to discover.

Polygon spoke with lead designer Gareth Hughes to learn more about Elite Dangerous: Odyssey. To hear him tell it, a game long derided as being a mile wide and an inch deep is about to get a whole lot deeper.

Here’s everything we know about Odyssey, and how it will change the spacefaring game when it releases in early 2021.

Since Elite launched in 2014, players have only ever experienced the game from inside a vehicle. More often than not, that’s been one of the game’s 40-plus starships. The Horizons expansion, released in 2015, also added the Surface Recon Vehicle (SRV), which players can use to zip around on the surface of planets. With Odyssey, players will get their own Neil Armstrong moment, setting virtual foot on the surface of unexplored planets where no one has ever gone before.

For most players, that “one small step” will come a little later in their in-game journey. For many, the on-foot journey will begin inside one of the game’s new social spaces. That’s where they can come together with other players and get missions from non-player characters (NPCs) in person.

Hughes tells Polygon that there will be three types of social spaces: Planetports, Spaceports, and Outposts. These will be added to the game at pre-existing locations all around the Milky Way, depending on the types of structures already in place.

Small orbital stations — little mining outposts, perhaps, or trade depots with just a few landing pads — will get Outpost social hubs. Meanwhile, larger starbases — the game’s iconic 20-sided-die-shaped Coriolis starports and massive, spherical Orbis stations, each with a dozen or more landing pads — will get Spaceports. Finally, large surface installations — think Survey sights and Observatories, each with as much capacity as a large starbase — will get Planetports.

Based on information provided to Polygon by the player-run Elite Dangerous Star Map (EDSM), those additions alone will add more than 40,000 new interior spaces for players to hang out in. But don’t expect them to look and feel all that different from each other. While Hughes said that his team is working on adding variation through things like flags and banners, there will only be the three unique layouts at launch.

“They’ll certainly feel different between planet Planetports, Spaceports, and Outposts,” Hughes told Polygon. “It’s difficult for us to generate […] the vast amount of content that this could take to make them unique.”

Social hubs will primarily be built for efficiency, Hughes said, with quest givers and vendors positioned in roughly the same location from site to site. Players should expect more intimate interactions, including questlines with lots of dialogue. But the architecture will look very much the same from place to place.

“Time is money in Elite,” Hughes said, “so we didn’t really want people to have to find it laborious to engage with these [social hubs] when they’ve got stuff to do. So we’re trying to find that really fine balance between them feeling unique within the three kind of categories that I outlined, that they’re efficient to navigate through, and they have a real visual punch.”

Some of that visual punch will come from massive windows. For instance, in Spaceport social hubs, players will be treated to full, 360-degree views of the inside the drum of a busy space station. When NPCs and other players come in to dock, those sitting inside the social hub will be able to watch them fly around in real time. For a game where some players spend years on lengthy expeditions, explorers can now look forward to the potential for a warm welcome upon their return. All they need to do is let their friends know they’re on the way back, and the local cantina can easily be filled with well-wishers.

In addition, the NPCs inside these new social hubs in Elite will differ based on what factions are in control of them. That will bring to the forefront an often overlooked part of the game that has been present since launch — the complex system of political and economic conflicts that make the game’s populated area (known as “the Bubble”) such an interesting place to hang out in.

Fans and developers alike call it the Background Simulation, or BGS for short, and it will play a new and important role in Odyssey.

A lot has been written about the so-called Stellar Forge that was used to create Elite’s version of the Milky Way. In the past I’ve called it a galactic rock tumbler, which used all the real-world scientific information that it could find to place the stars and their accompanying planets into the game world. But, running alongside the Stellar Forge was another system that procedurally generated the in-fiction groups, alliances, and little wars that dot the Bubble.

Take, for instance, my home star system of Ross 263. There are seven different NPC factions present in the system right now, including groups such as the Ross 263 Independents, Ross 263 Transport Company, and Silver Galactic Incorporated. To date, those factions have only ever been represented by an entry on a list and a still image of a random character. In Odyssey, those characters will finally come to life.

Visiting the massive Doi City starbase today, I can take missions from all of these minor factions. And, just like other complex massively multiplayer games, I will earn cash as well as faction credit depending on who I work with. Faction credit is already a major gameplay component in Elite, which players use to unlock permits that allow them to visit high-security star systems as well as top tier starships. But, what many players in Elite don’t realize is that taking on missions actually changes the fate of these minor factions within the Background Simulation.

As players take on missions for a faction, they can actually increase that faction’s control over a given star system. This in turn allows those factions to take control of the built-up areas within it. Factions can go to war against each other, driving out competitors from neighboring star systems or indulging in internecine battles against their closest neighbors. Systems can boom, raising the rewards for any player taking missions in that area. They can also bust, resulting in missions focused on ferrying food and shelter to the system’s impoverished residents and refugees.

Hughes told Polygon that the BGS and the factions that maneuver within it will play a huge role in the tone and timbre of the gameplay options available in a given star system. In fact, groups of players can actively push the BGS one way or another through concerted effort, creating the kinds of on-foot, first-person missions that they prefer to experience.

That player-directed influence will play out most clearly in Odyssey’s newest, largest, and most dynamic new planetary locations. They’re called Settlements, and Hughes says they will provide entirely new ways to experience the game.

When Odyssey launches in early 2021, “thousands” of new Settlements will be added to the game. They will show up on the surface of existing planets, but also on newly accessible planets with thin atmospheres. And each of them will have one or more factions vying for control.

Settlements will be larger than social hubs, Hughes said. Each one will comprise multiple buildings, with each themed to match the nature of the Settlement itself.

Once players arrive at a Settlement, they will be able to transition smoothly between exterior spaces — the dusty surfaces of distant planets — and these themed interior spaces through airlocks. Once inside, they’ll be able to breathe without the help of their spacesuits. Missions might require them to visit a given location, to retrieve a specific item, or to kill a certain NPC.

Alternately, players can just roll in on a Settlement uninvited and do whatever they want. Options include looting the place stealthily, or killing every NPC they can find and making off with everything that’s not nailed down. If there’s combat, Hughes also said it can be of the combined arms variety. That means players on foot can be supported by other players inside wheeled SRVs and even starships, all working toward the same goal.

Whatever players do inside these Settlements, of course, will have a direct outcome on the factions that control it, and the BGS that dictates who is in control of which parts of a star system.

“The BGS can also start to infer difficulty of settlement, through which faction’s controlling it,” Hughes said, “including what the quality of their combat guys are. So, again, it’s an indirect way of allowing players to increase their power in the game and still have challenges, because what we didn’t want to find is that you go to a settlement and it feels exactly the same as every other settlement — especially if combat kicks off.”

Of course, Elite Dangerous isn’t the only spacefaring game out in the wild right now. Eve Online has been running its complex economic and political systems for the better part of 15 years. Meanwhile, No Man’s Sky has captured the attention of players around the world with its own brand of galaxy-spanning procedural generation and esoteric world building. But the Odyssey update, on the surface at least, appears to bring Elite ever closer to its main competitor — the lavish, sprawling, multi-genre games in the Star Citizen universe.

We asked Hughes how he has been inspired by the other, hugely popular games in the spacefaring genre.

“I’m really pleased that there’s other competitive games in the space,” he said. “I think it maybe just builds interest for all of us. If our player base is looking at other games and being excited by them, and then with Odyssey, if we kind of start to come into their on-foot space as well, I think it’s just good for everybody.”

“I think Elite’s always been fairly unique in its execution,” he continued. “It’s found its own kind of identity. […] I think if we look too hard at what others are doing, then really, we’re just starting to create a facsimile. And I’m not particularly interested in that. I like to be inspired by other people. That’s as far as it goes for me, I think. I like the fact that Elite has a unique identity, and I’m not really that interested in moving it closer to other games.”

We’ll learn more in the months leading up to the launch of Elite Dangerous: Odyssey in early 2021, which is expected to arrive simultaneously for PlayStation 4, Windows PC, and Xbox One.