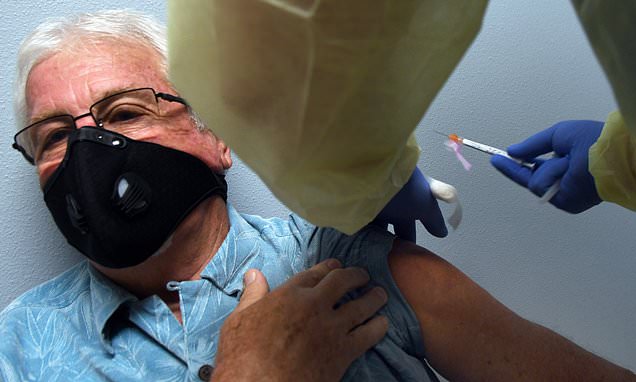 Moderna’s coronavirus vaccine triggered a strong antibody response in older adults, and only triggered ‘severe’ side effects in one volunteer, new data from the firm’s phase 2 testing shows.

Two doses of the shot were given to each of about 40 volunteers, ages 56 to 70 and older.

All of the patients enrolled to the the study developed ‘neutralizing’ antibodies to coronavirus – the kinds of immune cells thought to be most capable of shutting down the virus and stopping it from infecting our cells.

About 80 percent of people who have died of coronavirus are older, making the safety of any vaccines against COVID-19 in aging populations paramount.

With the election just over a month away, and President Trump promoting the possibility of a vaccine being given emergency approval by the Food and Drug Administration (FDA), concerns are rising over the safety of COVID-19 shots.

Overall, the older trial participants had only mild to moderate reactions to the two injections – mostly side effects like soreness, headache or fatigue – suggesting that at least one candidate coronavirus vaccine appears safe for those who need it most.

One group of trial participants got two injections of a lower dose coronavirus vaccine, and the other got two shots of a higher dose vaccine.

Regardless of which strength they got, all participants in the study, published Tuesday in the New England Journal of Medicine (NEJM), had an antibody response.

Injections were given 28 days apart, and following the second dose, the trial organizers at Emory University in Georgia said that the older volunteers bodies’ produced comparable levels of antibodies to those seen in the younger group (aged 18-55).

They showed hearty signs of both binding and neutralizing antibodies, suggesting that there were plenty of the immune cells designed to block SARS-CoV-2, and they would have no problem latching onto the viral particles.

Additionally, the volunteers’ blood was rich in T cells and important inflammatory proteins, indicating that the overall immune response was in working order.

That’s especially encouraging because vaccines do not have a great track record in older people generally.

Like the rest of the body, the immune system starts to slow down and become less precise as we age.

B cells are an important target for vaccines, because they are responsible for producing antibodies, the bespoke immune cells that fight individual pathogens after we’ve encountered them or after our body has been taught to chun them out by a vaccine.

In the older trial participants, the researchers saw that two doses of vaccine triggered a larger output of antibodies than the infection itself had in COVID-19 survivors, as measured by sampling their plasma.

Importantly, the Moderna’s vaccine is designed specifically to combat strains of coronavirus that have developed two mutations – 614D and 614G – which, together, have become the most dominant and infectious sub-form of coronavirus circulating in the US.

And limited though this early data is, the Emory and Moderna researchers saw that their experimental vaccine has potential to work just as well in older, more vulnerable people as it does in younger ones, who now make up the largest share of infections, but only a small portion of coronavirus deaths.

Equally important, the vaccine was generally safe and led only to short-lived, tolerable side effects in the vast majority of the small study group.

About half of patients in both the 56-70 age group and the 71 and older age group who got the lower-dose vaccine had side effects after their first shot, as did about a quarter of those who got the more potent version of the shot.

The majority of the older participants, ages 65 and up, had only mild side effects (gray) after both their first and second doses of Moderna’s coronavirus shot. A few had moderate effects (blue) and two people developed ‘severe’ reactions: fever and fatigue (yellow), suggesting the experimental shot is safe

After the second dose, about  quarter of the older group who got the weaker shot had side effects, but they were all mild.

The majority of each of the two age groups who got the stronger shot had moderate side effects, and two people across the four groups had ‘severe’ reactions to the shots.

One person between ages 56 and 70 who got the lower dose shot developed a fever that was classified a severe side effect after receiving their second dose of the coronavirus inoculation.

The second severe adverse event occurred in a participant who was 71 or older and received two injections of the higher dose vaccine and developed more lasting fatigue.

But all of the participants recovered, in a positive sign for one of the leading candidate coronavirus vaccines.

Moderna’s CEO, Stephane Bancel, has said he thinks the company will most likely know if its vaccine works by November, when it expects to have enough data from its phase 3 clinical trials in tens of thousands of younger people to know if rates of coronavirus infection were lower among those who got the real vaccine compared to those who got a sam placebo.

President Trump wants a shot approved before the November 3 election, and Moderna’s top competitor, Pfizer, claims it is poised to fulfill the president’s hopes nd submit data for emergency use authorization (EUA) next month.

However, more than 60 scientists and bioethicists have signed a petition urging the company to hold off until November – after the election – in the interest of earning the trust of a public that has grown wary of the safety of a shot that’s been developed so rapidly, under highly political conditions.

The New York Times reported that the FDA itself was considering rule changes that could make it all but impossible for a coronavirus vaccine to get the green light before November, but Trump has hinted he could try to block the standards hike, and regulators have made no moves to put new rules into place thus far.