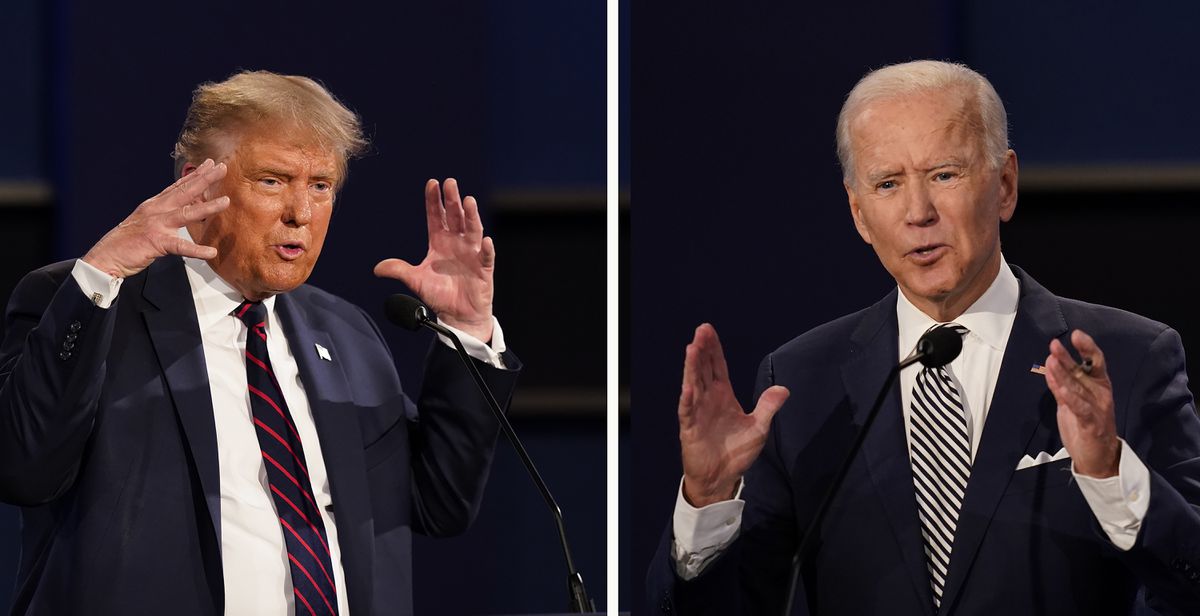 Donald Trump and Joe Biden squared off Tuesday in an evening that broke all norms of a U.S. presidential debate, producing little in the way of policy discussion while offering plenty of dark moments full of insults, interruption and personal attacks.

Mr. Trump came out aggressively at the start of the 90-minute debate at Case Western Reserve University in Cleveland, often talking over Mr. Biden and arguing more with moderator Chris Wallace of Fox News than his presidential challenger.

The Republican nominee doubled-down on his campaign rhetoric, defending his administration’s response to COVID-19, while refusing to condemn white supremacist groups and warning that Mr. Biden was beholden to a radical left intent on destroying suburban communities.

Mr. Biden often struggled to get a word in edgewise, though he lobbed several attacks at Mr. Trump, telling him to “shut up” and calling him “the worst president America has ever had,” while making an emotional appeal to voters who had lost loved ones in the pandemic.

We’ve assembled a group of experts to parse key takeaways from what will go down as the most contentious and controversial U.S. presidential debate in modern history.

The debate opened civilly, with pleasant greetings even as the candidates did not shake hands as part of the event’s physical distancing protocols. But it quickly descended into chaos.

Mr. Trump frequently interrupted Mr. Biden, prompting the former vice-president to retaliate with a series of insults, calling Mr. Trump a clown and a liar.

“Will you shut up, man?” Mr. Biden said when Mr. Trump interrupted him as he attempted to answer a question about the Supreme Court. “This is so unpresidential.”

Mr. Trump chided Mr. Biden about his decades in office – “in 47 months I’ve done more than you have in 47 years” – and questioned his intelligence. “Don’t ever use the word smart with me,” Mr. Trump said. “Because you know what? There’s nothing smart about you, Joe.”

The attacks turned particularly personal when Mr. Biden spoke about his son Beau, who died in 2015, and was interrupted by Mr. Trump mocking the former vice-president’s younger son, Hunter.

“I don’t know Beau, I know Hunter,” Mr. Trump said before launching into a diatribe about Hunter Biden’s overseas business dealings and his discharge from the Navy Reserve over a failed drug test.

“My son, like a lot of people we know at home, had a drug problem,” Mr. Biden responded. “He’s overtaken it. He’s fixed it. He’s worked on it. And I’m proud of him.”

COVID-19: “Get out of your bunker and save lives.”

Mr. Trump was on the defensive over his administration’s response to the pandemic, which has killed more than 200,000 Americans. Calling it the “China plague” the President touted his record on securing tests and protective gear and restricting foreign travel into the U.S. “We got the gowns, we got the masks, we made the ventilators,” he said.

He accused Democratic governors of keeping their economies closed for political reasons, claimed that more Americans would have died if Mr. Biden had been president, and said his economic record during the pandemic was the “likes of which nobody’s ever seen before.”

Mr. Biden attacked Trump for once suggesting that people might be able to inject themselves with bleach to cure COVID-19. (“That was said sarcastically,” Mr. Trump replied.)

In one of his more effective moments in the debate, Mr. Biden pointed directly at the television camera and told viewers who lost loved ones to the virus to envision the empty chair at their kitchen table, accusing the President of thinking only of himself. “You should get out of your bunker and get out of the sand trap and your golf course and go in the Oval Office and bring together the Democrats and Republicans and fund what needs to be done now to save lives,” he said.

While he was ostensibly there to debate policy with Mr. Biden, the President spent much of his time sparring with the moderator, Fox News host Chris Wallace. Mr. Wallace repeatedly struggled to prevent Mr. Trump from interrupting his opponent and to keep the debate on topic, at times urging him to “please stop.”

Mr. Trump often chafed at being asked questions challenging his record. “I guess I’m debating you, not him,” he told Mr. Wallace.

Mr. Wallace did about as good a job as could be expected under the circumstances, said Samuel Nelson, who directs the Speech and Debate programs at Cornell University. Sparring with the moderator helps Mr. Trump drive home his claims that the media is against him, Prof. Nelson said. “It’s part of his narrative that everybody is out to get him, he kind of likes that.”

Prof. Nelson suggested future debates consider scrapping the role of an active moderator altogether – or hold debates virtually over Zoom, so that the moderator could simply mute a speaker when his time was up.

Mail-in voting: “The election is going to be a fraud like you’ve never seen”

Mr. Trump redoubled his attacks on absentee ballots, claiming that efforts by many states to allow voters to avoid going to crowded polling stations would cause rampant misconduct. “The election is going to be a fraud like you’ve never seen,” he said, alleging that “millions of ballots will be manipulated.”

Asked how he would prevent voter fraud, Mr. Trump said he would urge his supporters to go to polling stations to monitor votes for signs of problems. Pressed on whether both candidates would refrain from claiming victory until the election results were official and ask their supporters to not engage in civil unrest, Mr. Biden quickly agreed. Mr. Trump sidestepped the question, while also avoiding Mr. Wallace’s efforts to get him to confirm whether he would accept the results of the Nov. 3 electron.

“The fact is I will accept it and he will too,” Mr. Biden said.

Winners: none. Losers: the future of Presidential Debates

Political analysts struggled to pick a winner. Mr. Trump’s debate strategy was partially successful in that it prevented Mr. Biden from getting enough airtime to seriously challenge the President’s record, or attack him on revelations about his income-tax payments, Prof. Nelson said. “The question is, is Trump’s goal to just survive the debate and motivate his base? Well, he survived,” he said. “I’m not saying this is a good strategy, but maybe it is, because we’re talking about how bad the debate was instead of the issues.”

But while Mr. Trump succeeded at disrupting Mr. Biden’s attacks, the Republican nominee did little to broaden his appeal beyond his base of supporters or offer voters a vision beyond what he promised in his 2016 campaign, Samuel Popkin, a retired political scientist at the University of California, San Diego and author a forthcoming book Crackup: The Republican Implosion and the Future of Presidential Politics.

“I think we saw a man who is still flailing at the difference between being the outsider who can sell charm and power, and the insider who has to justify why the next four years of more of the same is a good idea,” he said.

Mr. Biden was already facing exceedingly low expectations in the debate, given the Trump campaign’s efforts to paint him as senile. But the Democratic nominee was able to get in a few attacks on Mr. Trump’s record and offer a vision of what a Biden administration would do differently, said Amy Dacey, executive director of the Sine Institute of Policy and Politics at American University and a former chief executive of the Democratic National Committee.

“If one of the goals in a campaign is to not only talk about what you’re against, but what you’re for, I do think in some respects that [former] vice-president Biden was more clearly able to do that,” she said. Still, she added, this debate was likely to be one of the rare times when pundits call it a draw.

It was obvious, however, who the loser was: the Presidential debate forum itself.

“Perhaps the biggest loser tonight is the American public, who experienced little more than consistent bickering and interruptions for 90 minutes,” said Mitchell McKinney, professor of political communication at the University of Missouri. The next debate on Oct. 15, which is set to be held in a town-hall format that allows audience members to ask questions, might be more civilized, he added.

Others were not so optimistic. “It was the most disheartening public spectacle I’ve ever seen in American political life,” said Ross Baker, a political scientist at Rutgers University. He suggested the Commission on Presidential Debates, which organizes the match-ups, consider cancelling the next two scheduled events.

Where does the election go from here?

The candidates will both likely spend the next few weeks pushing highlight reels and fact-checking their opponents, but few analysts expected the debate to fundamentally change the trajectory of the race.

Most voters had already made up their minds about the candidates, and neither Mr. Biden nor Mr. Trump’s performance was out of character enough to sway many voters. Debates “never really change many minds because people don’t come to a football game with an impartial state of mind,” Prof. Baker said. “They come there and they root for one team or the other.”

Mr. Trump may have succeeded in energizing his base, while Mr. Biden may have won over some undecided voters, several analysts said. But few expected a dramatic change in the polls. “I’m going to be stunned if it makes any difference in the race,” Prof. Popkin said.

The debate was also a wasted chance for both candidates to lay out a clear vision of how to manage through the remainder of the pandemic and safely reopen the economy, two issues that are top of mind for many voters, Ms. Dacey said. “What do we have to do now? What are we gonna do about a vaccine? What are we going to do to reopen?” she asked. “There’s a lot of uneasiness with the public here in the United States about what that looks like, and I think this was a missed opportunity for candidates to try and help people navigate that and how their leadership styles would help them during this challenging time.”