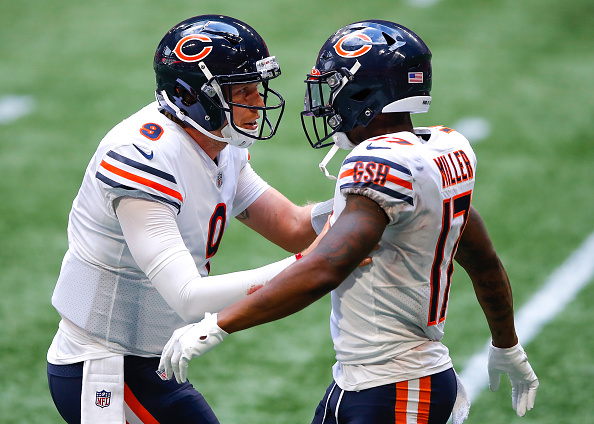 ATLANTA – There may very well be nothing that stirs up the emotion of a fanbase like the switch of the player running the offense in the National Football League.

When a starting quarterback is either selected in the draft, signed as a free agent, wins a competition, or takes over the position, it truly gets people going. That’s not a surprise, considering that this position is the most important in all of team sports.

Certainly Bears’ fans are aware of the incredible mood swings that come whenever the subject of quarterback has come up. Frankly, it’s been a problem for the franchise for the past three decades, with the ills of the team often starting with the person at QB.

This has been no different in 2020, where the debate over who should be the quarterback has been the talking point since last March. Mitchell Trubisky won the quarterback competition over Nick Foles, which drew plenty of reaction from the fan base when that happened a week ahead of the season opener.

Naturally, Sunday’s moment with 9:50 to go in the third quarter stirred up all those emotions again.

Following an interception early in the third quarter Matt Nagy made the move to bench Trubisky for the first time in his Bears career in favor of Foles. The move sent waves across the NFL and generated plenty of reaction from the fan base on social media.

Meanwhile on the field it a moment of opportunity for one and frustration for another, all happening as team is trying to erase a 16-point deficit.

It just kind of happened out of nowhere, he just said ‘Nick [Foles] is up’ and that was that,” said Trubisky of the moment he was told he was out. “I accepted the news. I had Nick’s back like he’s had mine. The situation sucked but it was just the flow of the game, how it was happening.”

On the flip side opportunity came to Foles, who has been through this a number of times in his career, even his one season in Jacksonville. Unlike that situation with Gardner Minshew, this time it was Foles who is the positive benefactor.

“There are definitely a lot of emotions, and that’s the toughest part of the game. And the biggest thing, and I’ve said it from the beginning, is how I approach the game. The QB room, the foundation of it should be friendship. Getting to know each other, being brothers. That stayed true to today. He was amazing. I’ve been where he’s been and it’s not easy. But he was supporting me 100 percent. I know the emotions are real, I’ve been there recently.

“But I’m grateful that throughout training camp, throughout the start of the season, we’ve continued to build that relationship where when something like this happens … it really sucks. It does.”

It’s not much easier for Matt Nagy, who made the move not only for Sunday but also permanently to go to Foles.

Then came the emotion of the actual result – three touchdown passes in the final seven minutes to help the Bears erase a 16-point deficit in a 30-26 win over the Falcons. It immediately endears him to a fan base that had been outwardly frustrated with the Trubisky over the last year-and-a-half, so seeing such play brought joy to many.

Rest assured, this probably won’t be the last time a Bears’ quarterback drums up emotions in 2020, but at least this one has a positive ending in what’s been a successful start to the season.