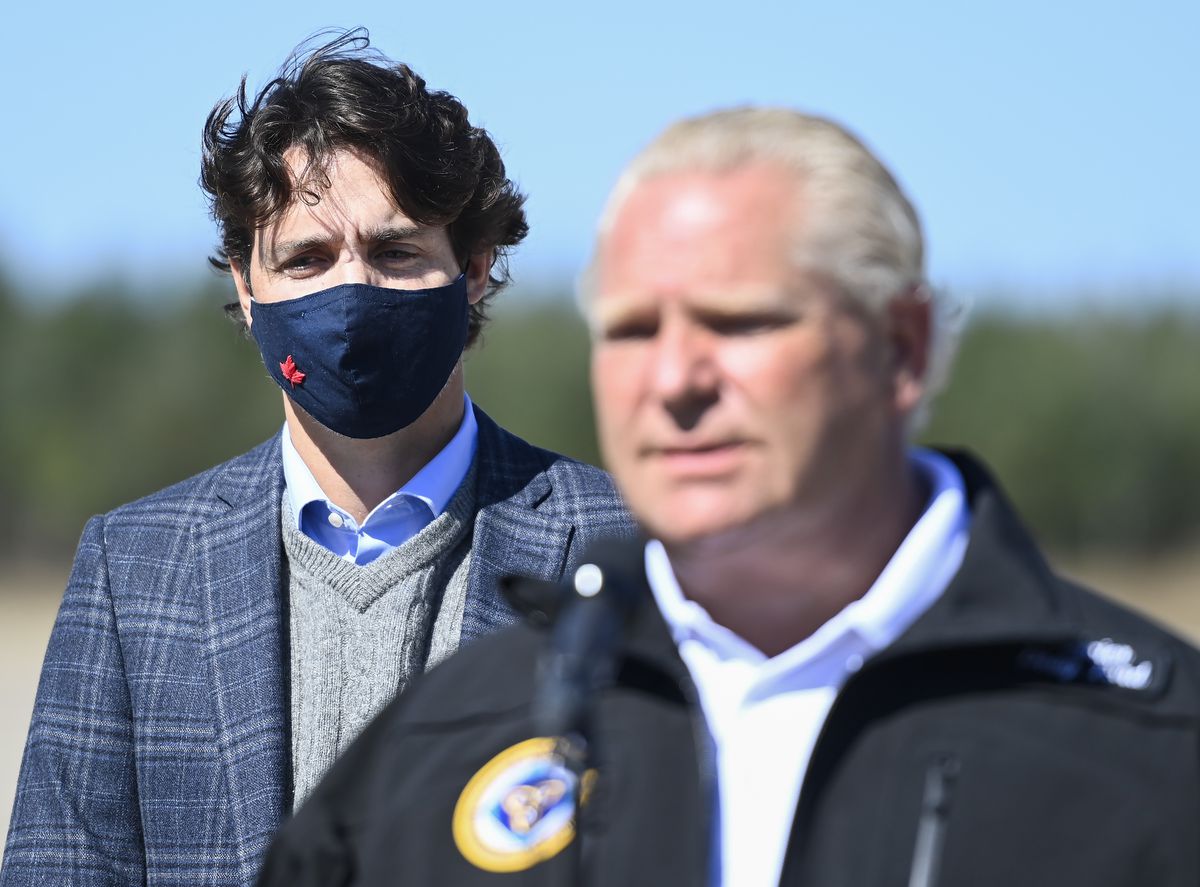 In the next election campaign, whenever it comes, Justin Trudeau won’t have Doug Ford to kick around any more.

In last year’s federal election, the Liberal Leader focused as heavily on the Ontario Premier, who was then unpopular because of spending cuts, as he did on then-Conservative leader Andrew Scheer.

At one news conference, in the middle of the campaign, Mr. Trudeau mentioned Mr. Ford 16 times.

The most serious bone of contention was the carbon tax that the Liberal government had imposed on provinces that didn’t institute one of their own. Mr. Ford’s government was so adamantly opposed to the tax that it mandated protest stickers (which had a tendency to peel off) on gas pumps.

Mr. Ford did his best to help his Conservative cousins by keeping a low profile. But it didn’t stop the Liberals from making him the focus of their campaign in Ontario. And it worked.

An Angus Reid poll taken during the campaign said half of Ontario voters thought their federal vote would be influenced by the performance of the Ford government, and 85 per cent of those voters thought it would make them less likely to vote Conservative.

“The Ford factor was a negative factor” for the Conservatives in the election, said Angus Reid executive director Shachi Kurl in an interview. On election night, while the Conservatives took many rural Ontario seats, the vast swaths of ridings in the 905 – the region surrounding Toronto named after its area code – mostly went Liberal red. Mr. Ford helped kill Mr. Scheer’s chances in Ontario.

A year later, things couldn’t be more different. Mr. Ford is highly popular. An Angus Reid poll four weeks ago had him the second-most popular leader in the country, behind B.C. Premier John Horgan. (The online poll employed a representative sample of 4,703 Canadian adults, reporting a comparative margin of error of 1.4 percentage points.)

The Ontario government has made its share of mistakes over the past seven months – most tragically in failing to protect residents of long-term care facilities. But voters seem willing to forgive premiers across the country, who are trying hard to do the best job they can during a pandemic.

Mr. Ford’s relations with the federal Liberals are now mostly friendly, and he has said he will not participate in the next federal election campaign on behalf of any party or leader.

That may disappoint Erin O’Toole, the new Conservative Leader. But the real loser is Mr. Trudeau. No longer will he be able to warn Ontario voters that to vote for Mr. O’Toole would be to double down on Mr. Ford. The Ford factor is no longer available to the Liberals.

“It represents the loss of a political foil against which to play, there’s no doubt about that,” Ms. Kurl said.

There are other reasons for the Liberals to worry about their Ontario base. Mr. O’Toole has had a strong start as Leader, presenting himself as an assured, moderate and compassionate Conservative – the very antithesis of Mr. Scheer, who never seemed comfortable with the job.

And Mr. O’Toole, who represents a riding in the 905, will be seeking to win seats in the region. Because they dominate the 905 so heavily, the Liberals have nowhere to go but down.

Of course, it’s always possible that by the time the next federal election is called, Mr. Ford will be unpopular again. The province is struggling to contain a second wave of infections even as it reopens its schools.

The accord between the Liberals and NDP over the Throne Speech ensures there will be no election this fall. The next realistic window is next spring. Who knows what the political landscape will look like by then?

Nonetheless, it seems unlikely that Mr. Trudeau will ever be able to tie Mr. O’Toole to Mr. Ford in a way that discredits both men. The Ford factor is no more – something to bear in mind when prognosticating the possible outcome of the next election, whenever it might be.