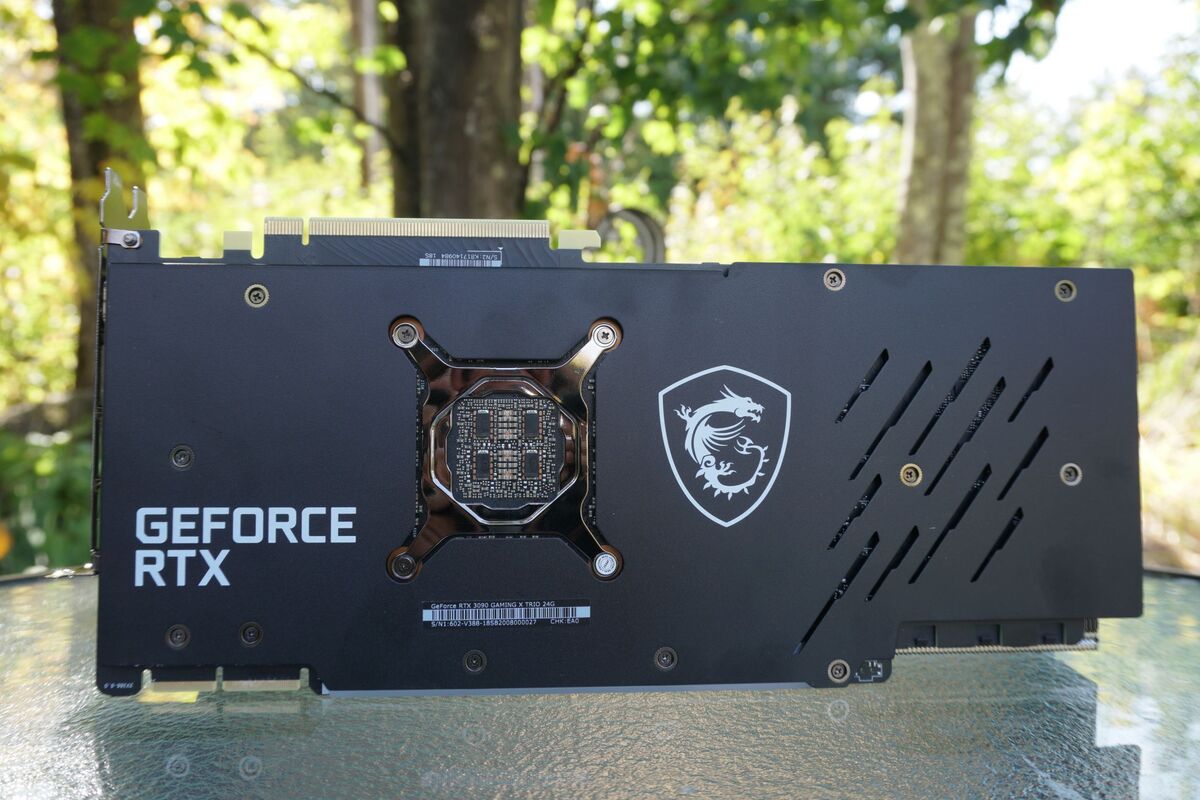 Over the weekend, forums around the Internet exploded with news of Nvidia’s GeForce RTX 3080 crashing in games for some users, followed by (very informed) speculation by Igor Wallossek at Igor’s Lab that part of the issue could by caused by the capacitors used on various custom boards. Read our explainer on the GeForce RTX 3080 crashing issues if you want to know more.

On Monday morning, Nvidia released new GeForce Game Ready drivers that appear to fix the stability issues. We were able to test the drivers on a on a troublesome RTX 3080 graphics card in PCWorld’s possession.

Nvidia’s article about the 456.55 Game Ready drivers overtly mentions only enabling Nvidia Reflex in Call of Duty. But buried deep in the release notes were an interesting tidbit: “The new Game Ready Driver also improves stability in certain games on RTX 30 Series GPUs.”

I have a custom GeForce RTX 3080 brimming with an all-POSCAP capacitor configuration that reliably crashed in Horizon Zero Dawn with the older, original 456.38 drivers. The new 456.55 Game Ready drivers indeed puts an end to that, but it looks like it does so by slightly limiting the maximum GPU Boost clock speed. Let’s dig in.

The graphics card that never launched

But, due to the time crunch, some of the reviewers were sent a pre-production version with 6 POSCAP’s, we are working with those reviewers directly to replace their boards with production versions. EVGA GeForce RTX 3080 XC3 series with 5 POSCAPs + 10 MLCC solution is matched with the XC3 spec without issues.”

To be absolutely clear in case you missed it: EVGA is not shipping FTW3 cards with an all-POSCAP setup, which couldn’t pass real-world testing. They delayed the card to include an MLCC array to ensure stability. The cards you can buy should be fine. Nvidia also tells me that “the appropriate number of POSCAP vs. MLCC groupings can vary depending on the design and is not necessarily indicative of quality.”

But what do you know: I just so happen to have one of those early pre-production FTW3 samples with six POSCAPs. And yes, I could get it to crash repeatedly while gaming.

I’d shelved reviewing this FTW3 because EVGA told me they’d be shipping me a new one that matches the configuration buyers received. But after all the ruckus I decided to poke at my pre-production POSCAP sample to see if I could get it to misbehave reliably. I could.

On the all-POSCAP FTW3, using Nvidia’s original 456.38 drivers, the Horizon Zero Dawn benchmark consistently crashes at 1440p resolution on our test system. (Our GeForce RTX 3080 review includes full test system details.) Other games work fine; even HZD works fine at 4K; but it always crashes at 1440p, and so hard that it takes out GPU-Z, too.

As affected users have said in multiple forum posts, the crashing appears tied to the GPU clock speed. Popping open EVGA’s excellent Precision X1 software, I found that the benchmark mostly ran at 2010MHz, and worked just fine while doing so. About two-thirds of the way into the benchmark, there’s a scene where the camera swoops through a courtyard filled with people. That’s where the card crashed. Precision X1 revealed that at that moment, the GPU clock speed hits 2025MHz, then plummets when the game locks up.

After letting the crash sort out, I popped open Microsoft’s Event Viewer to see what errors occurred. The game’s executable tossed out a D3DDRED2 error, which caused Windows to spawn a LiveKernel 141 (generic hardware component failure) event. That in turn forced the nvlddmkm display driver to stop working and eventually reset.

This happened every time I ran the benchmark. I suffered through six benchmark-crash-repeat runs to ensure the reliability of the unreliability. (Almost) every time I tried, the GPU clock hit 2025MHz in that scene and crashed the game.

After that, I ran the fantastic Display Driver Uninstaller software to wipe Nvidia’s 456.38 drivers from my system, and installed the new 456.55 drivers with promised stability fixes. That made Horizon Zero Dawn repeat its excruciating shader optimization process, but after that, the game just worked. I’ve rerun the benchmark five times with the 456.55 drivers installed and successfully completed every run. It just works, now.

But the all-POSCAP EVGA RTX 3080 FTW3 doesn’t behave quite the same as before.

As I said, with the original drivers, the HZD benchmark ran at a mostly consistent 2010MHz on this GPU until it hit the 2025MHz wall and crapped out. With Nvidia’s new 456.55 drivers, the the GPU clock speed in Horizon Zero Dawn now flitters between 1980MHz and 1995MHz (though it can still hit a stable 2010MHz in menu screens). Nvidia’s fix appears to be dialing back maximum performance with the GPU Boost feature. I’ve asked Nvidia for more details about what the new drivers do to improve stability and will update this with more info if I hear back.

Update: An Nvidia representative reached out to say the company hasn’t “done anything to lock the GPU to sub-2 GHz operation with the new driver.”

To put this in proper context, these maximum GPU Boost clock speeds remain well above the rated boost speeds for these cards. The “fix” results in such a minor speed difference that you won’t practically notice it in the game itself. After repeatedly hammering the benchmark, I managed to get HZD to complete a 1440p run once with the original, borked drivers. It averaged 129 frames per second. With the new, slightly lower-clocked drivers installed, it averaged either 127 or 128 frames per second across three runs. That’s essentially the same performance, well within the margin of error, and could simply be caused by run-to-run testing variance. When I tested the Nvidia RTX 3080 Founders Edition with the new drivers, there was no performance or power draw change whatsoever, though it didn’t come close to breaking the 2GHz barrier.

To be clear once more: The EVGA RTX 3080 FT3 models you can actually buy don’t use this all-POSCAP capacitor configuration. The production cards deploy MLCC for added stability. Because EVGA caught the issue early, this does not affect FTW3 cards on store shelves.

If a quick driver update is all it takes to fix this issue on custom boards with six POSCAPs—like the Zotac Trinity—or whatever else is causing stability issues, then great. We’ll need to do more testing to see if the slightly slower maximum GPU Boost clock speeds witnessed in HZD with the 456.55 drivers carries over to other scenarios with ultra-fast cards, to determine if this change affects the very topmost performance in the very fastest custom RTX 3080 models out there. (A quick run of the F1 2020 benchmark showed slightly slower clock speeds there, too.)

But for now, if you’ve been lucky enough to score a GeForce RTX 3080 or 3090, but unlucky enough to get one that suffers from crashes, go download Nvidia’s Game Ready 456.55 drivers pronto. The new drivers should be available via GeForce Experience as well. If our experiences with HZD is any indication, it could be the fix for what ails you.

Update: Users of the r/nvidia subreddit report an end to crashing with their RTX 3080 cards in various games, too. Hardwareluxx.de editor Andreas Schilling reports that the new drivers change the voltage frequency curve on his Asus TUF RTX 3080, which would explain the slight difference in maximum GPU Boost clock speeds in some scenarios.

Stay tuned for our full review of the EVGA GeForce RTX 3080 FTW3 (with MLCC installed) in the days to come. Spoiler: It’s good!

Editor’s note: This article originally ran on September 28, 2020, but was updated to make the essentially identical average FPS performance witnessed between the two drivers more clear. We also reworded the third paragraph from the end from “sub-2GHz limit” to “slower maximum GPU Boost clock speeds” as Nvidia reached out and said there is no sub-2GHz limit imposed by the new drivers.

Note: When you purchase something after clicking links in our articles, we may earn a small commission. Read our affiliate link policy for more details.

Senior editor Brad Chacos covers gaming and graphics for PCWorld, and runs the morning news desk for PCWorld, Macworld, Greenbot, and TechHive. He tweets too.