Milwaukee and Madison are no longer Wisconsin’s coronavirus hotspots.

As the state’s outbreak balloons to one of the nation’s worst, the surge of cases and hospitalizations in Northeast Wisconsin is unlike anything the region has experienced since the pandemic began.

Green Bay and Fox Valley-area hospitals are near capacity, and local resources are strained as  cases rise at a nearly exponential rate. While growth has slowed among college-aged people, that gain has been lost to rapid increases among other age groups.

“We can’t blame it all on college campuses,” said Jeff Pothof, chief quality officer at University of Wisconsin Health.

Pothof believes that the early-September surge among young people and the outbreaks at University of Wisconsin campuses may have given people in other parts of the state a false sense of security.

“People started to think that, ‘as long as I’m not in a college town and I’m not a college student, things are OK,'” he said.

Young people in college towns do continue to report high case numbers, but the outbreak has spread beyond campus communities, according to a Milwaukee Journal Sentinel analysis.

Two weeks ago, people ages 10 to 29 accounted for nearly half of new cases in the state. But last week, they made up a little more than a third.

And that age group actually reported fewer cases last week  than the week prior, while middle-aged adults saw 45% to 55% more cases week over week.

The state Department of Health Services on Monday reported 1,726 new cases and 6,159 negative tests for a positivity rate of 21.9%.

Testing is up compared to the spring — the state now regularly tests more than 10,000 people a day, compared to about 1,500 a day in late March —  but the percentage of positive tests rarely surmounted 10% then.

The positivity rate has climbed steadily since early September, and the average over the last seven days was 18.2%.

The state also reported two deaths, bringing the total to 1,283.

It all comes as President Donald Trump plans to hold rallies Saturday at airports in Green Bay and La Crosse — an area experiencing the second-highest rate of infection in the country, according to a New York Times analysis. The Green Bay area has the sixth-highest rate.

Trump’s airport rallies around the country have been marked by little social distancing or mask-wearing. 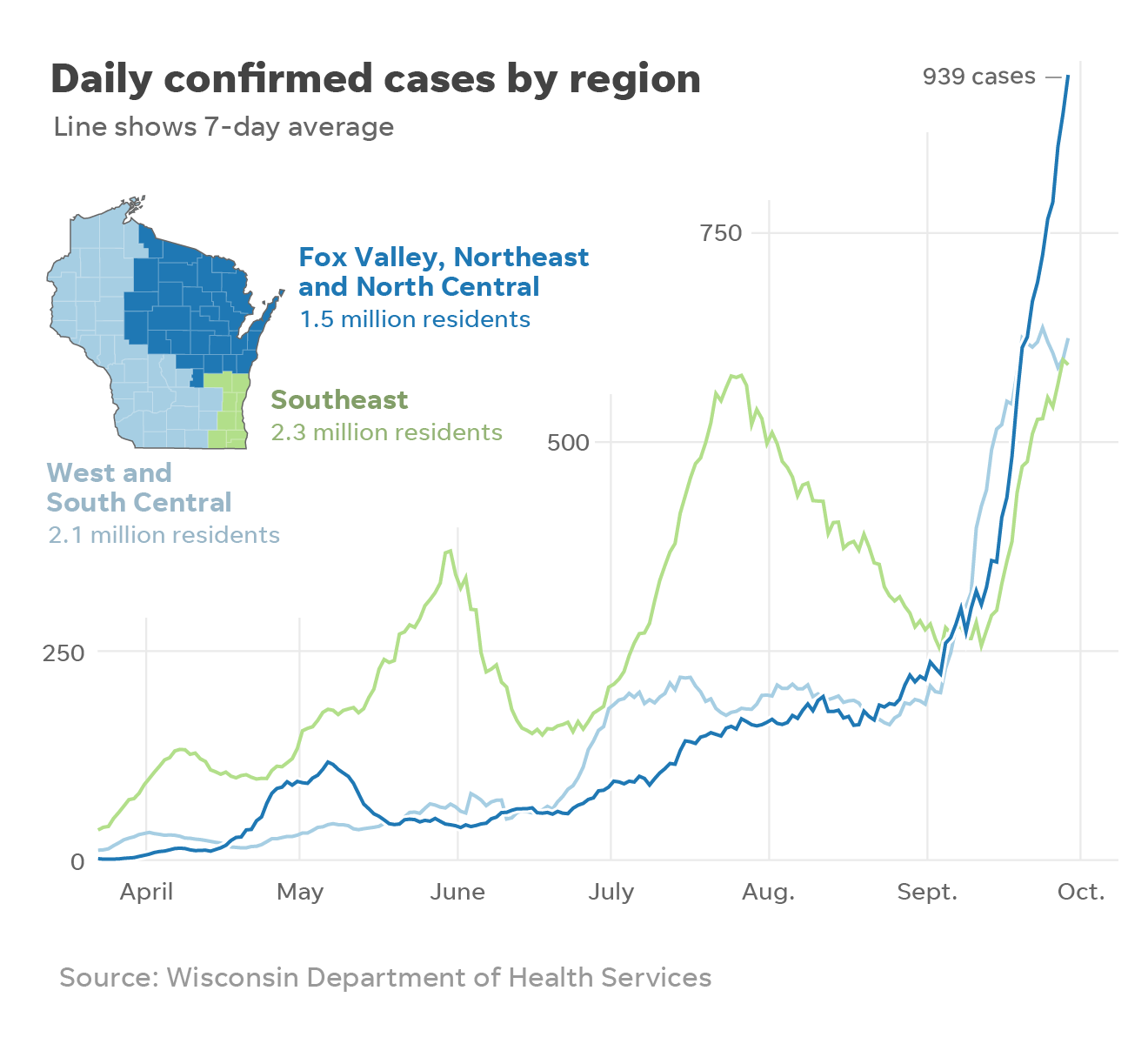 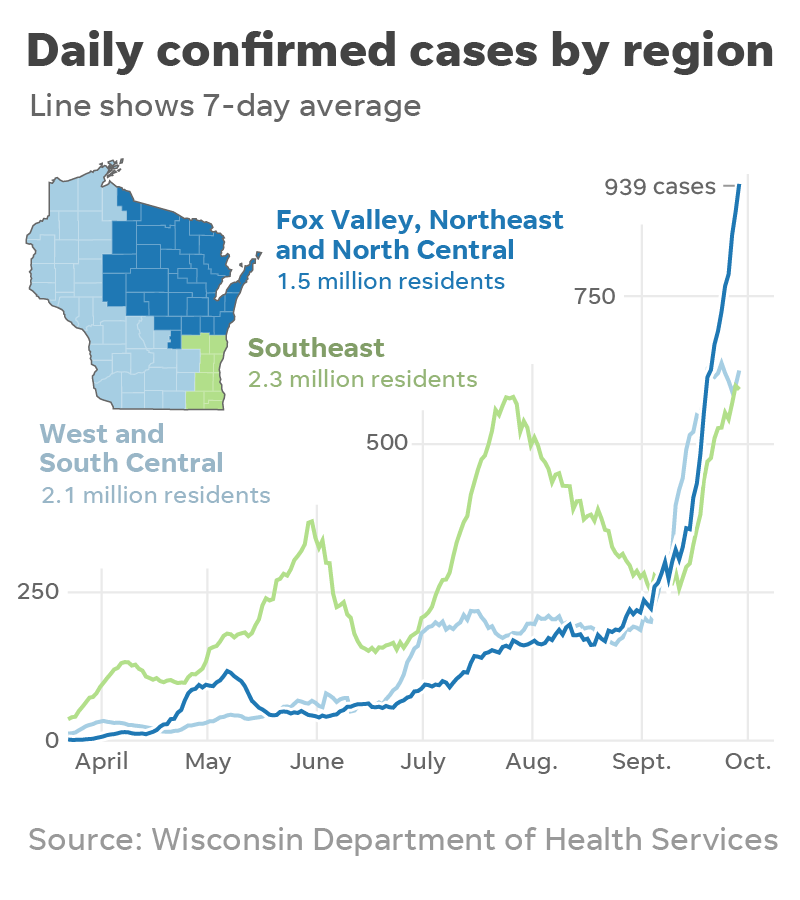 The outbreaks in the Green Bay, Appleton and Oshkosh areas are driven by large gatherings like weddings and parties as well as varying levels of mask-wearing, local health officials said.

Wisconsin residents may have “COVID fatigue,” tired of staying home, and are choosing to attend events and socialize as normal, health officials said.

“It’s not the time to throw in the towel and say, ‘What the heck, I’m just going to live my life,'” said Chris Woleske, chief executive officer of Bellin Health.

Pothof said a few large gatherings can spread the virus to hundreds of people.

Even those who live in small towns are not immune to the virus, he said — the rural, northern Kewaunee and Shawano counties are reporting the highest case rates in the state, several times greater than Milwaukee.

“The biggest thing that needs to shift is our behaviors,” Pothof said. “We really are stuck with … the same tools we’ve had since March, which is masking, social distancing, good hygiene.”

Much of the Midwest is seeing a surge in cases, as Minnesota, North Dakota and South Dakota join Wisconsin in outsized case growth.

In recent days, Wisconsin has been reporting higher daily case counts than the state of New York, which is three times as populous and has been seeing about 800 to 900 new cases a day. Its positivity rate is about 1%.

And Florida, in the spotlight in recent months for widespread outbreaks, is reporting an average positivity rate of just under 5%.

Cases in Wisconsin have been swelling since early September when colleges brought students back to campus, thought to be an early explanation for the surge.

UW-Madison halted in-person classes a week into the semester after more than 1,000 students were infected, and other schools — including UW-La Crosse, UW-Eau Claire and Marquette University — have quarantined dorms in hopes of preventing the virus from spreading further.

But campuses are no longer the only flash points.

For weeks, Fox Valley and northeastern Wisconsin communities have been setting records and filling hospitals — Appleton, Green Bay and the Oshkosh-Neenah area all fall among the top 10 metro areas in the nation where outbreaks are the worst, according to the New York Times.

The Fox Valley is at a “critical burden” level of infection, Winnebago County health officials said. The county reports about 574 cases per 100,000 residents. Milwaukee County, in comparison, reports a rate of 182.

And the growth is rapid. In Winnebago County, the 778 cases reported last week were more than double the week prior and more than five times the cases three weeks ago, according to local health officials.

Winnebago County last Thursday recorded 194 new cases in a single day, the highest total since the pandemic began. The city of Appleton has set a new record for weekly case counts for the fifth straight week, reporting 340 cases from Sept. 21 through Saturday.

And Brown County on Friday reported nearly 30% of tests were returned positive.

In the past week, Bellin’s emergency room was so overwhelmed that workers had to tend to patients on gurneys in the hallway.

Coronavirus hospitalizations in the Fox Valley are more than five times as high as they were a month ago. ThedaCare, which throughout the pandemic has been able to house all coronavirus patients at its Appleton hospital, is now making plans to route patients to Neenah and its critical access hospitals in Berlin, Shawano and Waupaca.

“If we don’t change something … we are back to square one, where we were back in February and March, and actually probably even somewhat worse off than at that moment in time,” CEO Imran Andrabi told the Appleton Post Crescent.

Hospitals in the spring made plans to expand their capacity to treat coronavirus patients, but since then many have restarted non-emergency procedures, compounding the space issue some hospitals are now facing, Pothof said.

If trends continue, the state’s health care system will face the far reaches of its capacity, he said.

“None of those plans is infinite. At some point, they all have an end-point,” he said. “And if you get to those end-points, that’s when bad things start to happen to patients.”

And as cases accelerate, one of the main tools to stop the spread gets harder to accomplish.

Multiple health departments across the state have reported that contact tracers, tasked with reaching infected people and identifying and tracking down their close contacts, have become overwhelmed by the barrage of new cases to work through.

“Our goal is to reach out to all confirmed cases within 24 hours of being reported to the health department, but due to the current surge in cases we are days behind this goal,” the Winnebago County Health Department wrote in a Thursday release.

Tracers in Portage County, Outagamie County and Marathon County have also reported not being able to keep up.

The key to turning around the current outbreak is getting the public to understand the severity of the virus and its widespread impact, Pothof said.

“The longer we go on, the gravity of those numbers and the historic nature of what we’re going through is starting to get a little bit lost,” he said, “and people are starting to go back to their normal behaviors, which unfortunately allow for the continued spread and escalation (of the virus).”

Haley BeMiller of the Green Bay Press-Gazette contributed to this report.