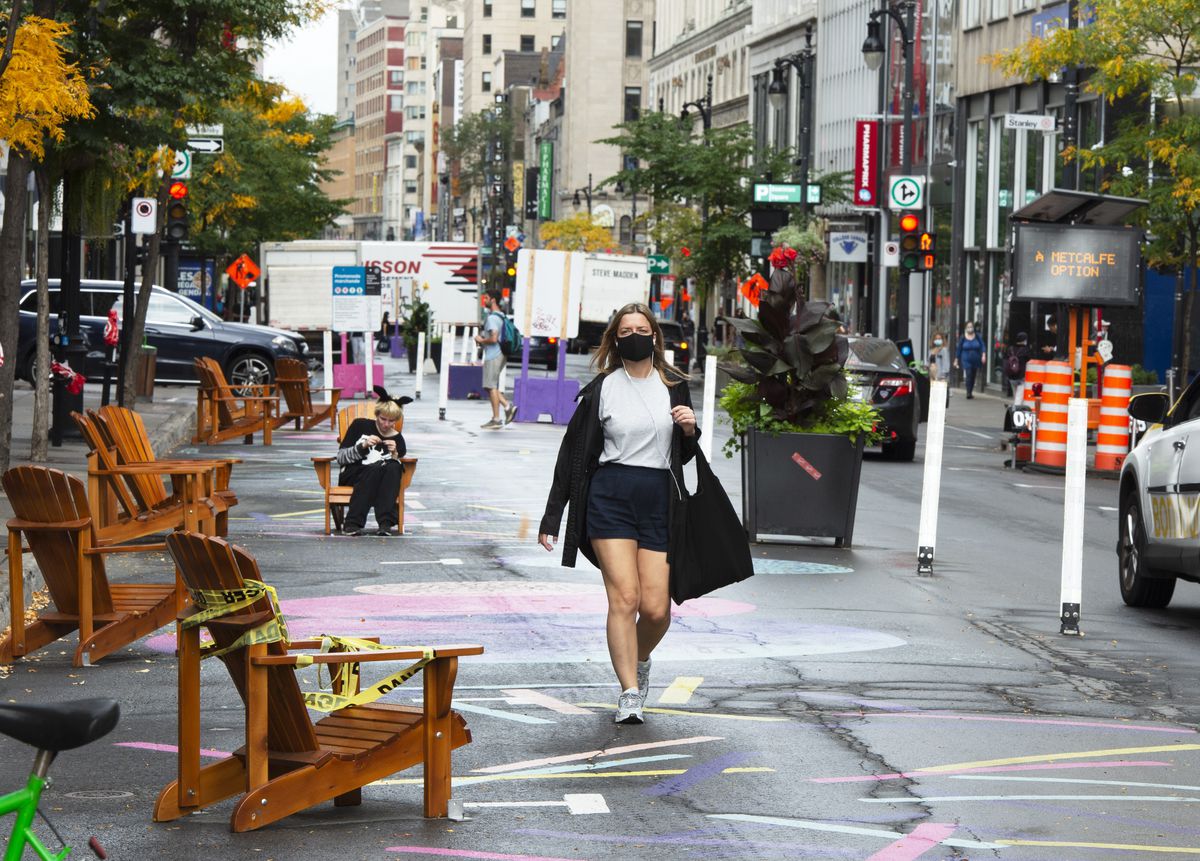 Quebec is imposing strict new measures to curb the spread of COVID-19 in its biggest cities, ordering bars and restaurants in Montreal and Quebec City to close, while banning most guests from private homes there in an effort to “break” the pandemic’s second wave.

Premier François Legault announced on Monday evening that the partial lockdown, which comes in response to a surge of coronavirus cases, will be in place from Oct. 1 to 28. It will also apply to the mostly rural Chaudière-Appalaches region and large areas surrounding Montreal, including the suburban city of Laval.

The Premier, who said he spoke with a “heavy heart,” urged Quebeckers affected by the regulations to strictly curb their social lives for the coming month to protect vulnerable people in the province, as infections soar to levels not seen since the spring.

How many coronavirus cases are there in Canada, by province, and worldwide? The latest maps and charts

Is my city going back into lockdown? A guide to COVID-19 rules across Canada

“We’re all in the same boat, and if we want to arrive in safe harbour, we have to work together,” he said.

Quebec is the first province to reinstate shutdown measures after a lull in cases across Canada this summer, and its experience may portend what other provinces will face if infections continue to rise.

Ontario Premier Doug Ford announced his province is experiencing its own second wave of the pandemic as health authorities reported 700 new cases of COVID-19 on Monday, its highest-ever daily number. Although he did not announce any new public health rules, Mr. Ford told Ontarians to brace for a difficult fall.

“We know that this wave will be more complicated, more complex – it will be worse than the first wave,” Mr. Ford told reporters at his daily briefing. “Together, our collective actions will decide if we face a wave or a tsunami.”

The limitations imposed in Quebec’s newly designated “red” zones – which will be at the highest level of alert in Quebec’s colour-coded pandemic alert system – include a dining room shutdown for bars and restaurants, which will be confined to delivery and takeout. Movie theatres, museums and other indoor public spaces will also be closed. Places of worship will have a maximum occupancy of 25.

Perhaps the most stringent rule announced on Monday bans private residences from having guests, except in rare cases such as home-care workers and plumbers. Residents of long-term care homes will be limited to one guest at a time, and people who live alone can have a guest from one other address.

Businesses outside the food and drink sector, including hair salons and hotels, can remain open.

Mr. Legault said the goal is to tamp down social gatherings, which tend to spread the virus, but preserve the economy and protect schools. The province will not change its back-to-school plan, which requires in-person attendance with rare medical exemptions and does not require masks in classrooms.

“I want to make it as normal as possible in schools,” he said. “There’s an even greater risk if we keep children at home.”

Mr. Legault and Health Minister Christian Dubé said cabinet is considering options for enforcement of the new measures and preparing financial compensation for the owners of affected businesses. Asked if he would consider extending the regime beyond 28 days, the Premier said it was possible if residents flout the rules in October.

“Honestly, we don’t want to,” he said. “But it depends on the people of Quebec.”

Quebec recorded 750 new cases on Monday, down from nearly 900 on Sunday, but representing a stark trend across the province.

Physicians and health researchers continue to ask why Quebec is again Canada’s epicentre. The Legault government emphasizes a loosening of behaviour among citizens. On the popular talk show Tout le monde en parle on Sunday, Mr. Dubé suggested the French cultural roots of the province’s francophone majority led to laxity.

But others point to government shortcomings in the summer and fall. The province has admitted having difficulty tracing contacts of infected people and offering occasionally muddled advice. David Lussier, a physician at the Institut universitaire de gériatrie de Montréal, which was hit hard by COVID-19 in the spring, said lengthened waits for testing frustrated him because it was obvious demand would increase.

“It makes me angry to see that they weren’t able to foresee something that was so predictable,” he said.

Dr. Lussier also said it is hard to pinpoint the cause of the second wave because the provincial government does not provide good data on the location of outbreaks. A spokesperson for the Ministry of Health said on Monday that the government was not in a position to release such data because management of outbreaks is the responsibility of regional health authorities.

In Ontario, Mr. Ford did not announce new restrictions, even as the Ontario Hospital Association called for reopening to be rolled back in Toronto, its surrounding areas and Ottawa, where most new cases are.

“A return to Stage 2, with restrictions on indoor dining and bars, places of worship, weddings, gyms, movie theatres and other non-essential businesses, is needed now to keep schools open and prevent a further acceleration of infections,” said Anthony Dale, president and CEO of the Ontario Hospital Association.

When asked about the recommendation, Health Minister Christine Elliott said, “We don’t want to turn back a stage unless we absolutely have to. But if we do have to, we will.”

Ontario’s Chief Medical Officer of health, David Williams, called the latest numbers “a wake-up call.” He said Ontario could have thousands of cases a day if the spread is not contained. But he noted the 700 cases could also be high as a result of a backlog in laboratory testing.

Dr. Williams also said the second wave is different than the first wave, because most cases are in urban areas, not around the province.

He said about 60 per cent of new cases are among those under 40, who have shown a “cavalier” attitude, and he encouraged people to stick to contacts in their household, essential services and schools.

Sign up for the Coronavirus Update newsletter to read the day’s essential coronavirus news, features and explainers written by Globe reporters.