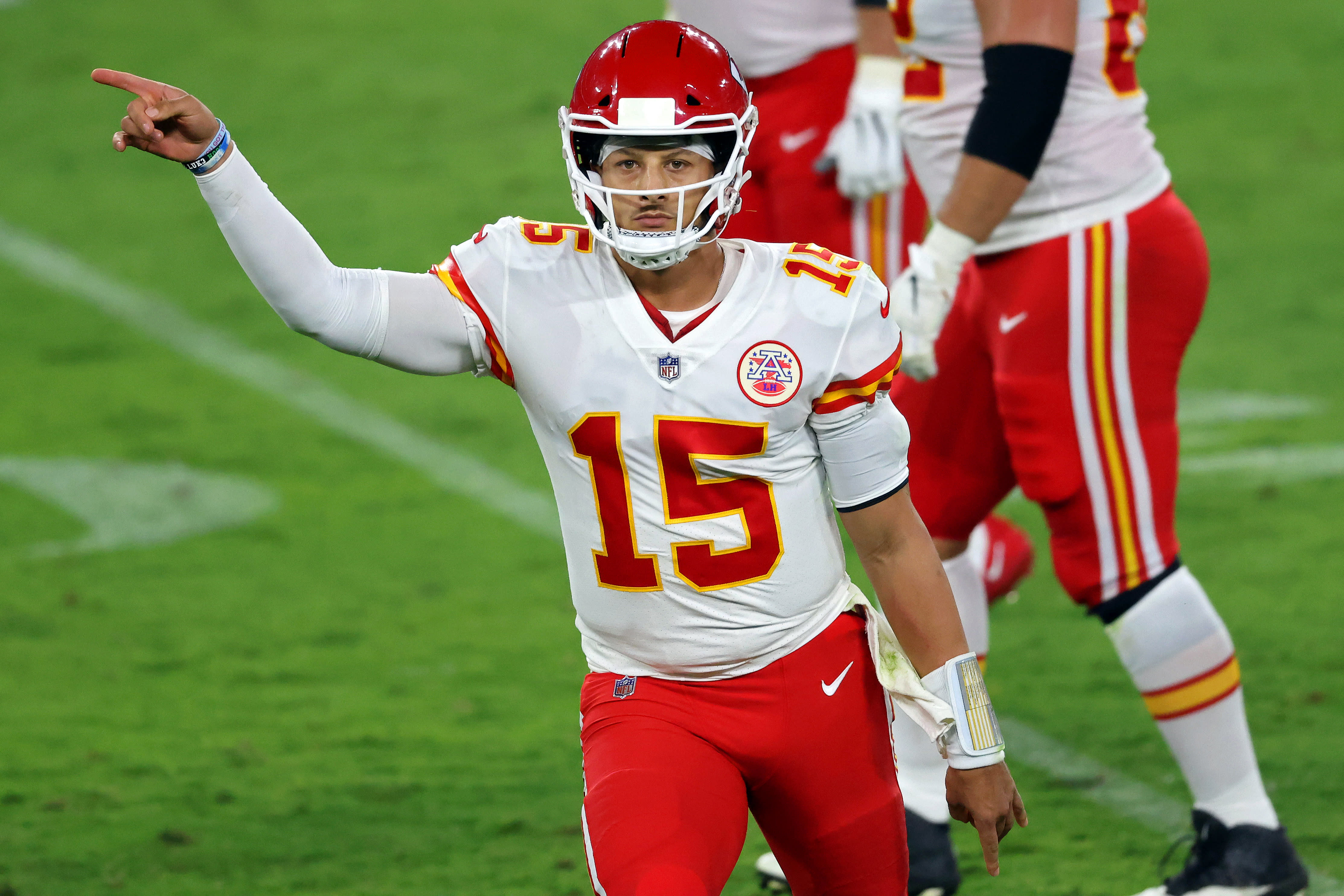 On Monday night, we found out that top tier has just one team.

There’s no question anymore who deserves the title of the NFL’s best team. The Chiefs’ utterly dominant performance in a 34-20 win over the Ravens puts all other NFL teams in chase mode. We’re more likely to have conversations about 16-0 before anyone realistically challenges the Chiefs for the top spot in the NFL.

But it’s impossible to pick anyone else after what we saw in Baltimore. Until further notice, there are two tiers: The Chiefs, and then everyone else.

The Jets have been impossibly bad through three games. Rich Hribar of Sharp Football Analysis had the damning stats:

If the Jets don’t beat the banged-up Broncos at home on Thursday, we might have to start wondering if we’re witnessing a historically bad team.

Myles Jack moved to outside linebacker and that has unlocked a long-awaited breakout. Jack was Pro Football Focus’ top-graded linebacker through two weeks. In Week 3, he had 11 tackles to lead the Jaguars. He’s just 25 years old and gives the Jaguars another foundational piece to build around.

It seemed surreal in the fourth quarter Sunday when the Falcons were blowing another double-digit lead. It seems impossible that it happened for a second straight week, because in more than 100 years of the NFL, it had never happened. The Falcons are the first team to lose two games over a full season in which they led by 15 or more points in the fourth quarter, according to Elias Sports, and they did so in back-to-back weeks. The good news is the Falcons did hold big leads over the Cowboys and Bears, so realistically they’re not as bad as their 0-3 record. How’s that for optimism?

Dalvin Cook looked great, the coaches finally let Justin Jefferson play, the offense had its best game, and they still lost at home. They’re in a division with two 3-0 teams, and it’s really hard to see Minnesota digging out of this hole.

Shaq Thompson was great in the Panthers’ upset win at the Chargers. He posted 13 tackles, forced a fumble and recovered it, and had Pro Football Focus’ top grade among all Panthers defenders. Thompson is filling in nicely for retired Luke Kuechly, which isn’t easy to do.

A quick defense of Doug Pederson’s decision to punt late in overtime on Sunday: It’s Week 3, and a half-win could be important in the terrible NFC East. A half-win allowed the Eagles to gain a game on the other three teams in the division, who all lost. Pederson’s options were to go for it on fourth-and-12 at his own 49, try a 64-yard field goal or punt and take a half of a win. If the Eagles turn their season around, they’ll appreciate having that tie instead of taking a low-percentage shot at a win. Just because football culture says it’s wrong to settle for a tie doesn’t mean it was the imprudent move.

The Dolphins’ bad start might have been a result of starting against the Bills and Patriots. They looked pretty good against the Jaguars. Miami isn’t on the level of Buffalo and New England, but it can still be a competitive team as it continues its rebuild.

The Lions offense could be close to a real breakout. If they operate with a little more tempo, are more efficient in the red zone and Kenny Golladay stays healthy, they might be on to something. A comeback win Sunday at Arizona gives the Lions hope to turn things around.

The Texans started at Kansas City, hosted Baltimore and played at Pittsburgh. It’s an impossibly tough stretch to start the season. The Texans might not be good but it’s also possible they’re much better than their record. The schedule will ease up, and we’ll find out.

The Chargers put up 16 points against a bad Panthers defense, despite 330 yards from Justin Herbert, 132 yards from Keenan Allen and 11 catches from Austin Ekeler. They lost a game they shouldn’t have lost, and they were never really in the game until the end when a perfectly drawn-up trick play wasn’t executed. It was a game the Chargers really can’t afford to lose.

Dak Prescott is on pace for 6,336 passing yards. And all the Cowboys have to show for it is one lucky win and two losses. The defense has not been good enough, and that’s an understatement. And yet, because the NFC East is so bad, Dallas is still a prohibitive favorite to win a division title.

Since losing to the Ravens, the Browns are 2-0 with a pair of 30-point games. They played the Bengals and Washington, so maybe there’s not too much to take from that. But after all these down years, nobody should shout “the Browns haven’t beat anyone” to their fans. Just let Cleveland enjoy it.

The Colts have played the Jaguars, Vikings and Jets, who have combined for a 1-8 record. And in the one win, the Jaguars over the Colts, Indianapolis outgained Jacksonville 445-241. Long story short, the Colts haven’t played a tough schedule. But the last two weeks, they did rout the Vikings and Jets, which is a good sign. We’ll just have to wait for them to play a quality opponent before we know who the Colts are.

The Bears have two crazy comeback wins and beat a bad Giants team 17-13 when they got a stop at their own 10-yard line as time expired. The Bears have replaced quarterback Mitchell Trubisky — which Matt Nagy seemed beyond ready to do, considering he yanked Trubisky after one pick on Sunday — and will go with Nick Foles in Week 4 and probably beyond. It’s better to be figuring out things at 3-0, but Chicago is not some undefeated powerhouse. They could easily be 0-3 right now.

Through three games, Drew Brees’ average depth of target is 5.2 yards. That’s last in the league, 1.2 yards behind Sam Darnold’s second lowest mark. Nobody else is below 6.8. If Brees still feels good and can throw the ball like he says he can, the Saints need to open up the offense and show it. Maybe Michael Thomas’ eventual return changes everything, but it seemed on Sunday night like the Saints’ offense was dumping it off to Alvin Kamara and hoping he could make something happen. That’s not going to take the Saints very far.

Rob Gronkowski led the Bucs with seven targets and played 93 percent of the snaps. Through three games, he still doesn’t have a catch longer than 10 yards. The Bucs are coming together, with a defense that looks very strong and Tom Brady coming off a 297-yard game, but they will have to figure out what to do with Gronkowski. He’s a legend and a future Hall of Famer, but he’s not the same player he was.

The Raiders were in a tough spot, going east for an early start against an angry Patriots team. They were coming off an emotional win in their first Las Vegas game last Monday night. It’s not a big surprise they were flat. Next week’s home game against the Bills will be a better test.

Kyler Murray’s first interception came from Detroit’s 30-yard line. His second and third interceptions led to 10 Lions points. Given how dynamic Murray is, it’s easy to forget he’s early in his second NFL season. There will still be mistakes, and some will cost the Cardinals games they should win.

How do you analyze what happened Sunday? The Rams came back from 28-3 to take a fourth-quarter lead and would have had the greatest comeback in franchise history had it not been for a questionable fourth-down pass interference call at the end. On the other hand, they did fall behind 28-3 and when they needed a stop, they couldn’t get it. It still seems like the Rams can take some positives out of a loss.

Given the 49ers’ injury list, winning any NFL game on the road 36-9 is really impressive. The win and the job Kyle Shanahan did to have his team ready will be dismissed in a flurry of Giants jokes. Don’t underrate what the 49ers did on Sunday. That was as impressive as any win around the NFL in Week 3.

The fact that New England won decisively on Sunday means the Patriots are really the same old Patriots. They just don’t lose games like that, coming off a loss and at home against a team they should beat. The Patriots aren’t going anywhere this season, no matter how many players they lost.

We think of Derrick Henry as invincible because he’s so big, but it’s fair to wonder if he can maintain anywhere near this pace of touches. He has 82 carries in three games. Josh Jacobs is second with 68 and nobody else in the NFL through Sunday’s games had more than 58. Through the Titans’ last 12 games, including playoffs, Henry has 304 carries, more than 25 per game. The Titans have gone from ignoring Henry’s prodigious talent for almost three full seasons to trying to wear him out before Halloween.

The Steelers pass the eye test, but they have let all three opponents hang around longer than you’d like. It seems they have another gear we haven’t seen yet, given all their talent. We’ll see if they can unlock that level and become a true contender in the AFC.

If Russell Wilson falls one touchdown short of Peyton Manning’s single-season record of 55, DK Metcalf easing up before crossing the goal line will be revisited. And it’s not crazy at all to think Wilson could challenge 55 touchdowns this season.

The Packers are going crazy on offense. They put up 37 points on Sunday without Davante Adams. They have the most points through the first three games of a season in team history. Aaron Rodgers is having an MVP-type start to the season. After an impressive win over the Saints, they should be viewed as the most complete team in the NFC.

The Packers almost grabbed the third spot. I still believe in the Bills, but nearly blowing a 28-3 lead in their first real test this season wasn’t a great sign (it’s also a reason they aren’t a spot higher this week). Still, Josh Allen continues to play well and even though they were lucky to get that pass interference call at the end, 3-0 is a great place to be.

No, they’re not dropping far. Here’s why: I’d pick the Ravens to beat every other team in the NFL. The Chiefs are simply operating at a different level than everyone else right now, and proved that Monday night. The Bills, Packers, Seahawks, Steelers, whoever — they all would have gotten blasted on Monday night, too. The Ravens will be fine now that they won’t see the Chiefs anymore.

Sportswriter problem: We have 10-15 more years to write about Patrick Mahomes’ career, and we’ve already run out of adjectives to describe his greatness.