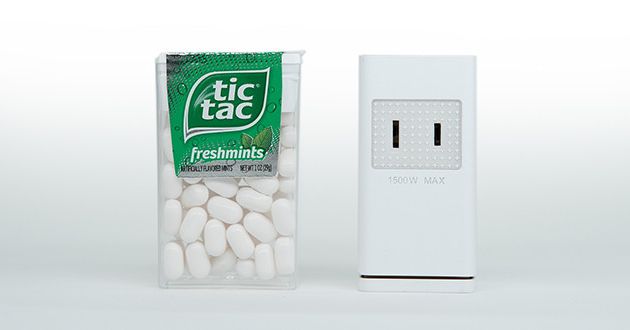 Hyper, a gadget maker known best for its small and ultra-fast gallium nitride (GaN) chargers under the HyperJuice brand, is back on Kickstarter with a new plug that’s even more impressive than its last: a stackable GaN charger that can support an eye-popping 1600W of passthrough power. This follows Hyper’s first 100W GaN charger released via Kickstarter last fall and made available for purchase back in July.

The charger, which comes in a 65W option with three plugs (two USB-C and one USB-A) and a 100W option with four plugs (three USB-C and one USB-A), has a built-in plug of its own rated at 1500W, so the charger can be plugged into a second unit to multiply the passthrough power available and double the ports. (Or in the event you just don’t want to lose an outlet.) Hyper says you can actually stack 16 of the 100W model on top of one another for a max of 1600W, 48 USB-C ports, and 16 USB-A ports.

For reference, 100W is enough to power most laptop computers while simultaneously charing a second smartphone or tablet. Take the power-hungry laptop out of the equation and Hyper’s GaN chargers can handily support as many as four devices at once — hence the four plugs on the 100W brick, although the company does advertise its 100W model as capable of charging an iPhone, iPad, and MacBook Pro all at the same time.

The real draw here, however, is the stackable nature of the chargers, allowing you to preserve an outlet when plugging in the HyperJuice charger or stacking multiple together all on one wall outlet to multiply the number of available ports.

9to5Mac got to go hands on with the new HyperJuice to show off its capabilities, and it looks like a seriously impressive and well-designed gadget:

Thanks to GaN, which is a much more efficient charging tech than traditional silicon and therefore allows for smaller and faster chargers, these chargers as as small as a box of mints. The 65W option measures 2.83 inches x 1.42 inches x 1.2 inches. The 100W option is 3.36 inches x 1.77 inches x 1.20 inches.

These products don’t come cheap — the 65W model will retail for $80 some time next year, while the 100W model will cost $100. But pledging to the Kickstarter today will get you in the queue for one starting January 2021 at the Kickstarter special discount of 40 percent off, as the 50 percent early bird discount is unfortunately already over.

Hyper has blown past its initial $100,000 goal with more than $300,000 in orders as of this afternoon, but that company has a rather successful track record on the platform following last year’s campaign. And its past devices are all available on Amazon if you’d rather pick one of those up now while you wait.