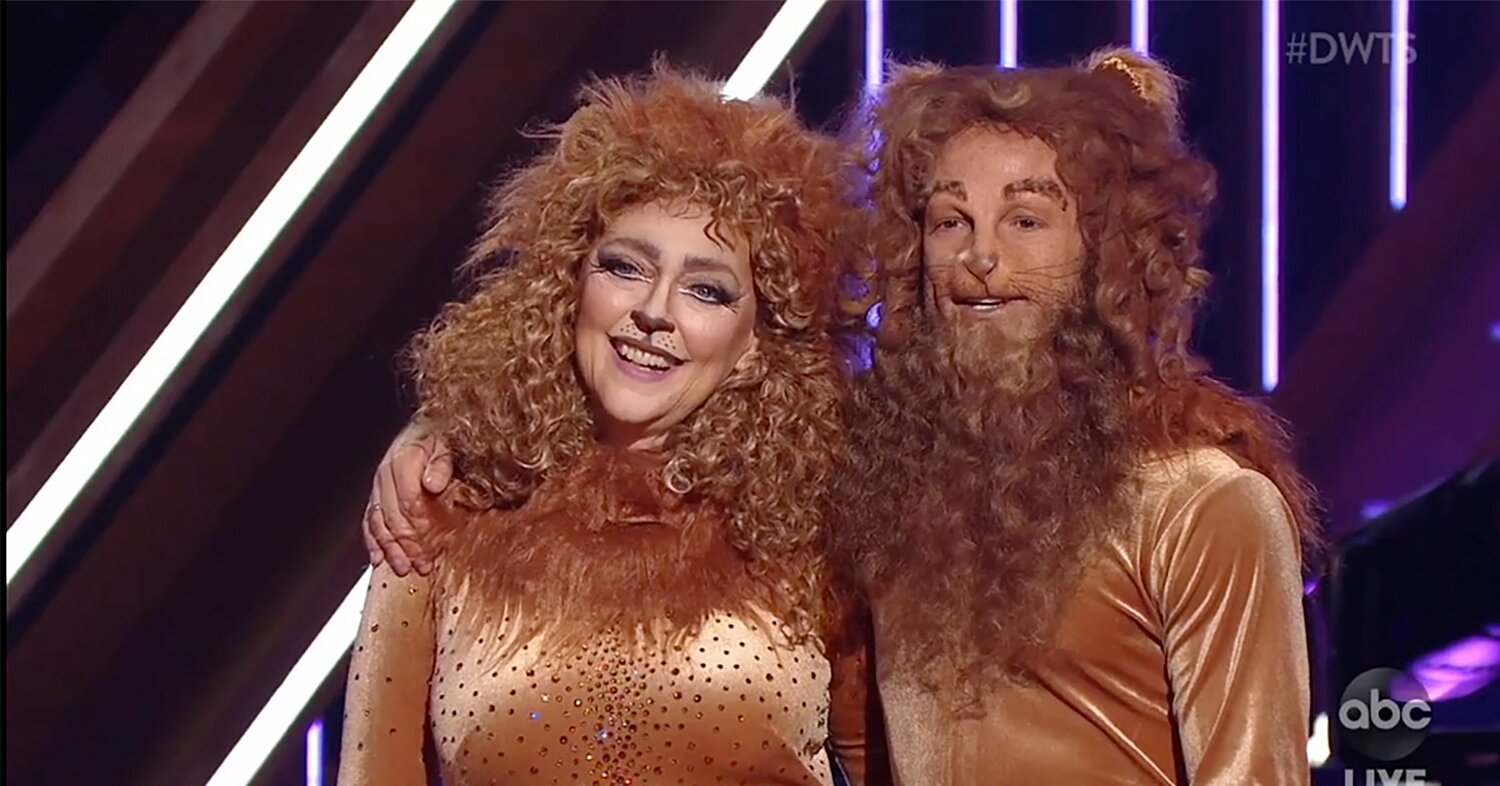 Welcome back to Glitter Gulch! It’s Disney night on Dancing With the Stars, friends, which means someone gets to play Cinderella — while someone else has to channel a candlestick. Let’s check out what happened Monday at the second-happiest place on earth!

Carole Baskin and Pasha Pashkov: The Tiger King star got another chance to redeem herself by talking about the work she does with big cats, even though she can’t give her caged animals what they really want: freedom. I’m sure she’d also like to be free from songs that reference anything related to felines, but this is DWTS, after all. Cue: a sad samba to “Circle of Life,” from The Lion King. What do you think, Bruno Tonioli? And please — don’t hold anything back. “I am stunned. I actually have never ever see a samba like this one,” he said. “You just walked through it. Samba needs life, bounce, and energy. She just can’t sleepwalk through a Samba.” Meow! Score: 12 out of 30

Anne Heche and Keo Motsepe: Hey, that’s Len Goodman explaining how to dance the quickstep! I miss the ol’ boy. And yes, Anne, it’s quite all right to say Keo looks like a god at your age. Throw that enthusiasm for his hunky looks into your “Zero to Hero” performance to the Hercules tune! “I love the start… and then you needed to recalibrate the partnership,” lamented a pink-haired Carrie Ann Inaba. Added Hough, “Anne, I have a suggestion: In rehearsal, dance the entire routine by yourself. When you join Keo, it is two people coming together.” Score: 15 out of 30

Skai Jackson and Alan Bersten: Now we know that Skai was driven to tears backstage last week after pulling Alan’s hair during their oopsie-daisy on the dance floor. Don’t cry, princess! The tyke from Bunk’d was given the chance to open the show with a jive to “Almost There,” from The Princess and the Frog. Unfortunately, it wasn’t even remotely there for the judges. “I’m not really head-over-heels with this performance,” said Hough. “In the jive, you want your nose over your toes.” “That was a very difficult dance… you went with it with focus,” added Tonioli. “You have to maintain elasticity.” Score: 18 out of 30

Nelly and Daniella Karagach: To help promote Pixar’s latest confection, Soul, Nelly talked about following his dreams (and how he once worked for UPS) before attempting a foxtrot to a very slow “It’s Alright” from the upcoming movie. That wasn’t easy for the rapper. Judging by that post-dance giggle, he knew it too. “This is your first ballroom dance,” offered Hough. “For the first time, we saw a proper slow foxtrot,” continued Tonioli. “Now you have to be aware of your shoulders. You lose your neck.” Score: 18 out of 30

Justina Machado and Sasha Farber: The lucky lady from One Day at a Time got to do the Charleston to “Supercalifragilisticexpialidocious,” which also gave her a chance to explain how she, too, had a Mary Poppins-like upbringing (as the eldest of many siblings, she got to occasionally play caregiver). “What’s so incredible about you two is the way you match each other. I love that,” said Inaba. “When you think of Charleston, you think of the swivels, the footwork,” continued Hough. “There could have been more energy.” Score: 19 out of 30

Jesse Metcalfe and Sharna Burgess Thank you for reminding us, Jesse, that before you played a lawn cutter on Desperate Housewives, you began your career on the underappreciated soap Passions. Now why didn’t you inject more of that into your jive to “King of New York,” from Newsies? “I feel like you didn’t feel as comfortable with this routine. You got ahead of the music,” admitted Hough. “You told the story beautifully… but I also agree with Derek. Your musicality was less than favorable,” said Inaba. “You have to tap into the music.” Score: 20 out of 30

Monica Aldama and Val Chmerkovskiy: The cheer coach waltzed to her highest score yet by performing a dreamy number to Little Mermaid‘s “Part of Your World.” “You were fluid, you were flowing,” said Hough. “The magic of Disney has touched you!” added Inaba. “You were a different person on the dance floor.” Score: 21 out of 30

A.J. McLean and Cheryl Burke: Who didn’t enjoy watching the Backstreet Boy having tea with his little princesses? But there will be no tea spilling for this week 3 performance: The duo looked terrific in their costumes and performed the quickstep to “Prince Ali,” from Aladdin, with enthusiasm and ease. “You are fully committed to every performance. And honestly your frame was pretty good!” said Hough. “You are improving and refining every week,” added Tonioli. Score: 21 out of 30

Vernon Davis and Peta Murgatroyd: The former tight end literally kicked up his heels before quickstepping to “Be Our Guest,” from Beauty and the Beast. Score! “Real men play candlesticks. You radiate so much joy when you dance. I almost don’t notice some of those foot fumbles,” said Hough. “What is amazing is that you guys have found your balance in the partnership,” added Inaba. “You slowed down your energy to meet Peta.” Score: 22 out of 30

Jeannie Mai and Brandon Armstrong: The The Real host gave her husband, Jeezy, a sentimental present for his birthday: a perfect, balloon-filled Viennese Waltz to “Married Life,” from Up. “Jeannie, you found your pace!” said Inaba. “Your frame was fantastic,” said Hough, adding, “your best performance.” No wonder Mai was eager to steal the 8 that Tonioli gave her! Score: 22 out of 30

Chrishell Stause and Gleb Savchenko: If I ever had the chance to participate in Disney night, I would want to waltz to “A Dream Is a Wish Your Heart Makes,” from Cinderella. Damn you, Chrishell, for commandeering my wish! Not that I’d come close to rocking that tiara and gown as good as you. You aren’t nearly as clumsy as you think, either. “The belle of the ball! Gorgeous! You really look like the ultimate Disney princess,” said Tonioli. “Princess Carrie Ann approves of Princess Chrishell. You guys are like magic together.” Score: 22 out of 30

Kaitlyn Bristowe and Artem Chigvintsev: How bad was last week’s ankle injury, really? After scoring the first 8 of the season in week 2, Kaitlin earned two more Monday for her splendid foxtrot to “How Far I’ll Go,” from Moana. “Best dance of the night,” said Inaba. “I was elated watching it.” “You are beautiful dancer, such fluidity, so lyrical,” added Hough. “You really reminded me of the shape of water, breaking waves, a wonderful swell, continuous movement,” said Tonioli. “It was wonderful.” Score: 23 out of 30

Nev Schulman and Jenna Johnson: Why didn’t Catfish boy get to be the opening act? His Argentine tango to “Angelica,” from Pirates of the Caribbean: On Stranger Tides, was truly swashbuckling. “Now we are cooking with some hot sauce, that was so good!” exclaimed Hough. “I love the embrace, all the footwork, and the character. You nailed it, brother.” Score: 24 out of 30 (the highest of the season so far)

Johnny Weir and Britt Stewart: The skater teared up talking about the parents who gave up everything so he could compete in the Olympics. He dedicated his rumba — danced to “Reflection,” from Mulan — to his family. You done good, Ma and Pa. “I believe in you so much tonight watching you dance, it felt so good, I saw you make the transition from a skater to a ballroom dancer. It was epic!” said Inaba. “That was beautiful,” said Hough. “Johnny, well done.” Score: 24 out of 30

Anne Heche and Carole Baskin were in the bottom two. Hough and Tonioli saved Heche — which sent the cat activist home!

Dancing With the Stars