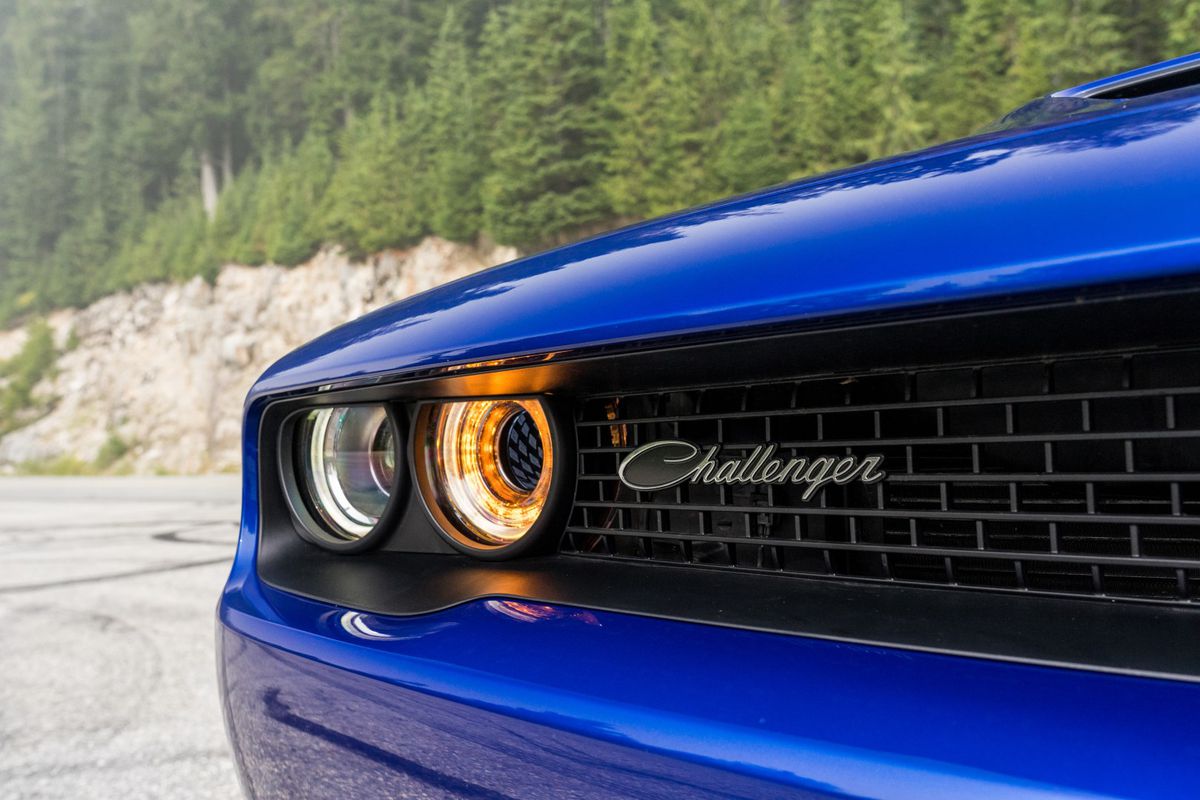 After years toiling away in the proverbial salt mines, youʼre finally in a position to afford your dream car. But times have changed, and owing a muscle machine these days is now considered about as socially acceptable as lighting up an unfiltered cigarette in the kidsʼ section of a library.

This Dodge Challenger Widebody is one such charismatic dinosaur, a vast blue coupe with a 485-horsepower, 6.4-litre, eight-cylinder engine that growls like a T-rex. Itʼs nearly two metres wide, five metres long, and it weighs just shy of two tonnes. You will have to pay an additional $1,000 gas-guzzler tax for the privilege of owning it.

Even so, it does look like enormous fun, doesnʼt it? Emphasis on enormous. So, this week, a minor experiment. What if this juggernaut could tread softly on its 305-millimetre-wide tires? What if you could have your muscle car rumble without the carbon-footprint aftershock?

Letʼs set out some parameters. According to the Canada Energy Regulator, the average fuel consumption per vehicle in Canada as of 2017 was 8.9 litres per 100 kilometres. However, we rank dead last globally in vehicle fuel efficiency.

Let’s do a little better. The best-selling passenger vehicle in Canada right now is the Toyota RAV4, a four-cylinder crossover with roughly 20 per cent of sales being the hybrid model. Averaging out the mix sold last year gives a mixed-use consumption of 7.6 L per 100 km.

Natural Resources Canada suggests that the average Canadian drives 15,200 kilometres a year. Thatʼs 292 kilometres a week, which applied against our RAV4 average consumption, comes out to 22.2 litres of fuel burned. If we can limit the Challengerʼs fuel consumption to less than 22 litres over the week, weʼll have a tame tyrannosaur with no worse emissions than the family four-cylinder Labradoodle.

If this seems like a Herculean task, it shouldnʼt. Performance cars like the Challenger, Ford Mustang or Chevrolet Camaro – even the Toyota Supra or a Porsche – are generally special-occasion cars. Few people are commuting to work every day in a widebody Challenger – not unless theyʼre a TV detective.

A car like this might be used only for summer driving, a fun weekend or two away, or perhaps a once-a-year road trip. Itʼs obviously an inefficient way to get around, but if youʼre judicious with the way you use it, maybe itʼs not such an irresponsible choice.

Further, there are a few things you can do to make sure the big Chally doesnʼt swill fuel unnecessarily. Step one is checking the air pressure on those big tires – even a few pounds per square inch (PSI) below the recommended pressure can sap fuel economy. Secondly, believe it or not, this automatic-equipped Scat Pack is slightly more efficient than other Challengers. At an average consumption of 13.0 L per 100 km, itʼs 0.9 L per 100 km more efficient than the manual version, and more than two litres thriftier than the Hellcat.

Okay, so thatʼs setting the bar a little low. However, there are other ways to lower your personal environmental impact, such that your driving choices are partly offset. Leaving the Challenger parked during the week, working from home and walking to the grocery store helps, but so, too, does switching to a meat-free diet. According to a study from Columbia University, becoming vegetarian can reduce carbon-dioxide output by about 3.6 kilograms a day. One litre of fuel emits 2.3 kilograms of carbon dioxide when burned, so thatʼs the equivalent of 1.56 litres of gasoline saved every day.

Maybe you can win friends with salad. I planned out a meat-free meal plan for six out of the seven days of the week, and added the total carbon savings to the fuel budget for the Challenger. Now we have about 30 L as a cap to beat that RAV4.

You can also choose to “buy local.” Produce is a start. Clothing is trickier but still worth pursuing, and it turns out the Challenger is a homegrown choice, built in Brampton, Ont. It doesnʼt have to be shipped across any oceans, and youʼd also be supporting your fellow Canadians.

Perhaps the greatest thing you can do to reduce your personal carbon emissions is probably something the pandemic has already forced you to do: Cut back on air travel. Forgoing just one domestic flight a year will offset at least one multi-day road trip in the Challenger.

Lastly, thereʼs the idea of purchasing carbon offsets from electric-vehicle makers. In the case of the Challenger, FCA has already had to do so in order to keep up with stricter carbon-emission regulations, particularly in Europe. According to Tesla chief financial officer Zachary Kirkhorn, Tesla will likely sell more than US$1-billion of carbon offsets in 2020, up from $US594-million in 2019. Fiat Chrysler struck a deal with Tesla last year to continue to purchase credits to stay in compliance through 2023.

In Canada, on the technological side of things, Squamish, B.C.-based Carbon Engineering Ltd. is working on large-scale carbon-dioxide removal and storage. Perhaps someday, this Challenger will be able to run on fuel thatʼs been synthesized from atmospheric carbon dioxide, for a net-zero greenhouse-gas impact. These things aside, I arrived at the end of the week with about 30 litres of fuel to work with, or roughly 230 kilometres of range for the Challenger to keep its nose clean. I used 15 kilometres of that to pick up my kids from school on Friday in the big blue Dodge, where all the other fathers immediately declared me King Of The Dads and put me on a Game Of Thones-style chair forged from cordless power tools.

On the weekend, I took a longer drive out to see an old friend further up the Fraser Valley. We took his son for a ride around the block, the Challenger snorting and woofing like Clifford The Big Red Dog, and gave a nine-year-old boy something to talk about with his car-crazy classmates for the next couple of weeks.

The Challenger drives just the way youʼd expect. Itʼs a comfortable cruiser with incredible grip, more about road holding than handling with those huge tires. The V8 soundtrack is an ever-present pulsing beat, but thereʼs also a surprisingly civilized ride on offer. Itʼs not the easiest thing to park. Itʼs even harder to keep a grin off your face when driving it.

Then we went and picked up my friendʼs brother, who is recovering from major surgery after a recent medical scare. We grabbed hamburgers and talked about the old days, about the craziness of the times weʼre in and about what the future might hold.

I arrived back home with more than half a tank of fuel left over. The pump clicked to a stop at 28.8 litres, meaning that the Challengerʼs weekly consumption just squeaked by under the wire.

There are those who wonʼt approve of the use of any fossil-fuel-powered vehicle. There are others who think even an electric vehicle is too environmentally suspect and that a bicycle would be a far better choice. There are also, Iʼm sure, plenty of people who might point out that this particular experiment would have been a lot easier to pull off in a lightweight-but-fun car like a Mazda MX-5.

Iʼm not trying to tell you what to do here; merely to show that itʼs possible to enjoy your passion and still be thoughtful about it. The Challenger will never be a sensible or energy-efficient choice, and Iʼm not here to justify it to those who will never like this sort of machine.

But cruising the roads while talking to my old friends about surgical scars and surviving day-to-day emphasized that lifeʼs too short as it is. If youʼve got a dream, thereʼs probably a way to make it work. Be thoughtful about it, but donʼt wait.

Shopping for a new car? Check out the new Globe Drive Build and Price Tool to see the latest discounts, rebates and rates on new cars, trucks and SUVs. Click here to get your price.

Stay on top of all our Drive stories. We have a Drive newsletter covering car reviews, innovative new cars and the ups and downs of everyday driving. Sign up for the weekly Drive newsletter, delivered to your inbox for free. Follow us on Instagram, @globedrive.