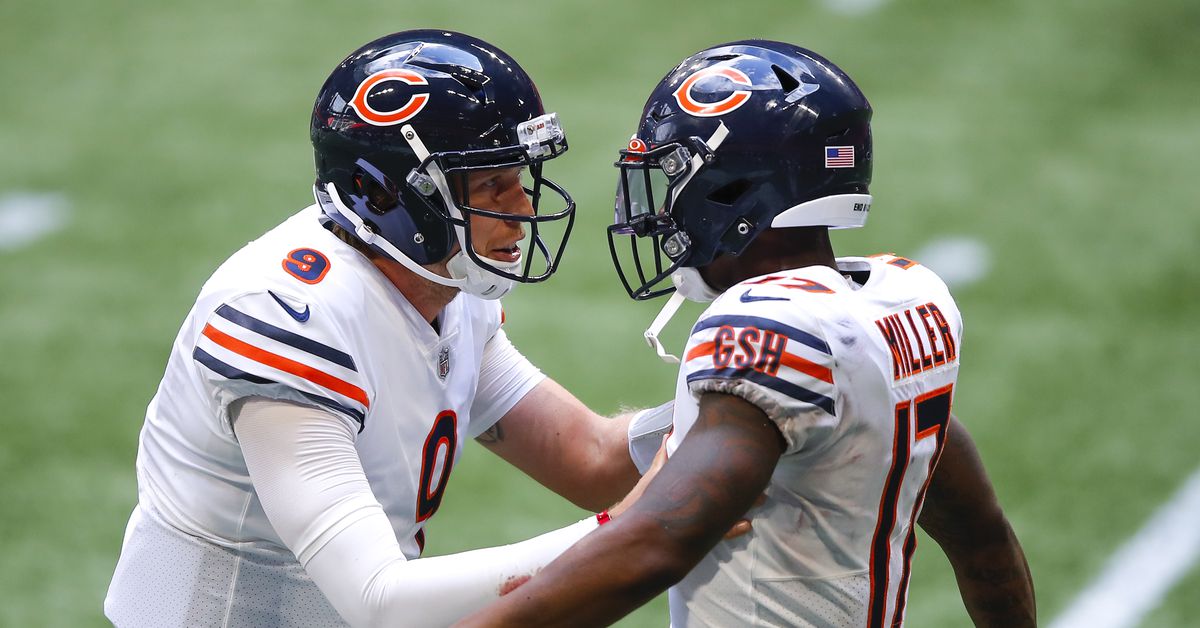 If this is goodbye, here’s what I’d like to say to Mitch Trubisky: Goodbye.

There is no need for a ton of words, certainly no need for a we-laughed-we-cried retrospective. It’s not his fault he’s not a very good quarterback. It’s Ryan Pace’s fault that he thought Trubisky was a very good quarterback. The Bears general manager chose the University of North Carolina star with the second overall pick in the 2017 draft. I’d mention that Pace should have chosen Patrick Mahomes with that pick, but a few fanboys have told me that I need to stop that. Ancient history, they say.

So I’ll just say that, in his 44th NFL game, there was Trubisky finally, fittingly standing on the sidelines Sunday. He was watching Nick Foles lead the Bears back from a 16-point second-half deficit. Foles’ three-touchdown fourth quarter shocked the eminently shock-able Falcons in a 30-26 victory and ensured that he is the Bears’ starting quarterback going forward. Let’s not build statues just yet, though. He is not Tom Brady. Or Mahomes (stop, Rick!).

But for now, it’s ta-ta to Trubisky. And hello to Foles. Surely, that’s enough.

Would you like a healthy serving of irony? Trubisky was lauded for a three-touchdown fourth quarter that helped the Bears beat the bad Lions in the season opener. After being benched in the third quarter Sunday, he had to watch Foles lead a similar comeback against a similarly bad team and then listen to similar praise being heaped upon his teammate.

Life isn’t fair. On the other hand, by the time this season is over, Trubisky will have $29 million of the Bears’ money. So “fair’’ is in the eye of the beholder.

The question, of course, is whether anything has changed with Foles’ ascension into the starting lineup. Answer: The Bears raised their record to 3-0 Sunday on their way to a second-straight 8-8 season. Too negative? OK, let’s be nice. Anything could happen the rest of the way. Foles could be the 2018 Super Bowl MVP Foles or the very average Foles he has been too often in his career.

What we know for sure is that, on Sunday, Trubisky was the Trubisky we’ve seen far too often. He easily could have had a pass picked off in the first quarter. In the second quarter, he overthrew a wide-open Anthony Miller on a deep pass. And he threw a terrible interception in the third quarter. Somewhere in there was a 45-yard run. But it wasn’t nearly enough to erase the other nonsense.

And so, with nine minutes, 58 seconds left in the third quarter, Foles jogged onto the field for the first time as the Bears quarterback. Offensive coordinator Bill Lazor had been the one to inform Mitch of his new status as former starting quarterback.

“It sucks to get news like that, but that’s how it goes,’’ Trubisky said.

For all his football heroics Sunday, Foles looked shaky at the start. Almost Trubiskian. He should have had a pass intercepted in the fourth quarter. Instead, the ball went through a defender’s fingers and into the hands of Bears tight end Jimmy Graham.

He threw a nice pass that Allen Robinson seemed to catch as he crossed the goal line. And officials initially ruled that he caught the ball before Falcons defender Darqueze Dennard pulled it away. But the touchdown was overruled upon video review. An interception was now in Foles’ permanent record.

So this is how it was going to be for the Bears? The same, old thing? Up and down, down and up?

With his team behind 26-10 in the fourth quarter, Foles went to work. First a short touchdown pass to Graham, followed by a Falcons punt, followed by a 37-yard TD connection with Robinson. The Bears trailed by a field goal with under five minutes left. Nah. Couldn’t be, right?

Yes, it could be.

These are the Falcons, who, upon ingesting a big lead, immediately get their stomachs pumped.

And, apparently, this is Foles, who knows a moment when he sees one. He found Miller over the middle for a 28-yard touchdown. Suddenly, the Bears had a lead, a strange, foreign object in their hands.

They can thank their new quarterback for that.

He had a warning that no Bears fan wants to hear.

Bears fans want to hear that a page has been turned and that their team finally has a good quarterback. For three-plus seasons, they’ve had a quarterback who leads the league in TV announcers saying, “I’m sure he’d like that throw back.’’

They’ve had a general manager who doesn’t seem to know quarterbacks. The Bears could have given money to Teddy Bridgewater in the offseason. They could have gone after Cam Newton.

Instead, they traded for Foles. Can he help atone for Pace’s choice of Trubisky over He Who Must Not Be Named in the 2017 draft? Let’s not put all that pressure on Foles. He had himself a game Sunday. Good enough. For now.