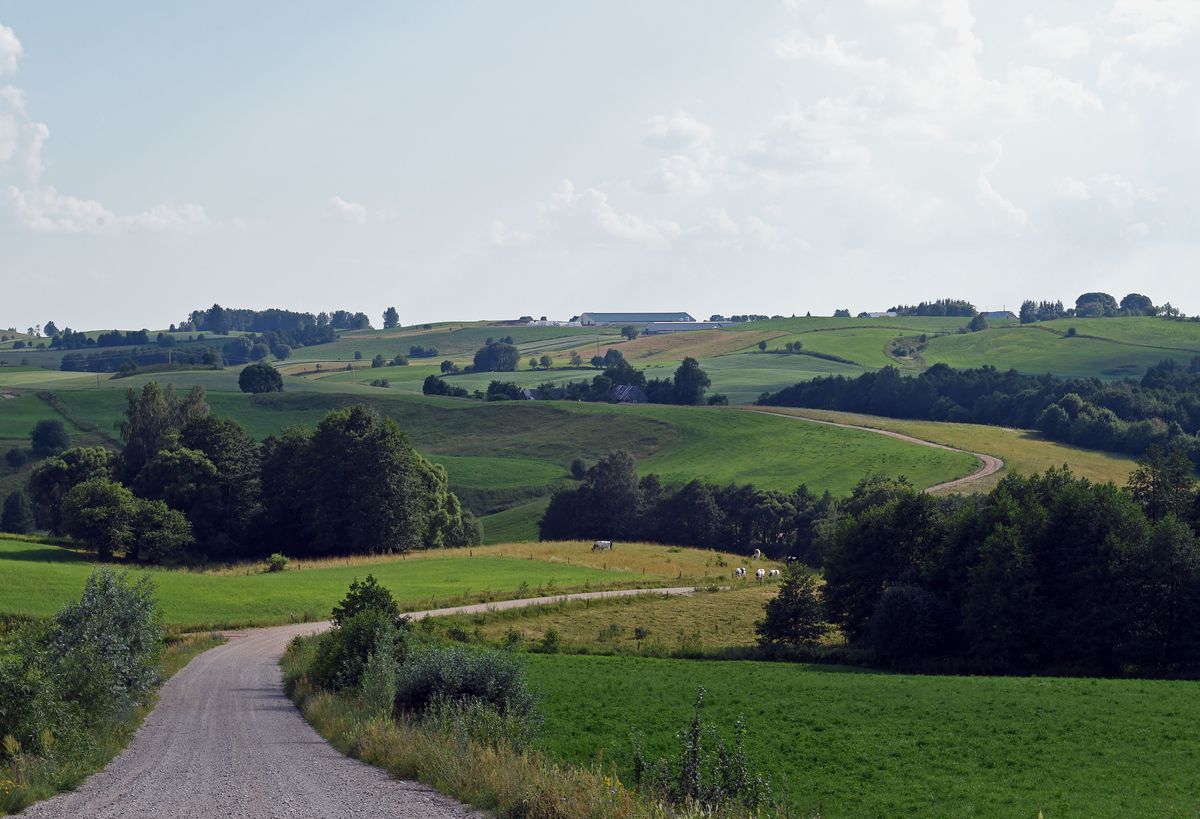 This quiet city in the northeast of Poland wishes it was renowned for its vast parkland of glittering lakes and rugged hills that were formed by the last Ice Age. But geopolitics mean Suwalki is known, among generals and presidents, for another, much less pleasant, reason: If war were ever to break out between Russia and NATO, the first battle might be fought here.

From Suwalki, the border with Belarus is just over 50 kilometres to the southeast. Drive 40 kilometres to the northwest, meanwhile, and you’re at the frontier of the heavily militarized Russian exclave of Kaliningrad. This is NATO at its narrowest point: a less-than-100-kilometre-wide supply line via Polish territory that connects the Baltic states of Lithuania, Latvia and Estonia to the rest of the alliance.

NATO military planners refer to this densely forested region as the “Suwalki Gap.” They believe this is where Russia would strike first in the event of a major war – and it’s what makes the pro-democracy uprising in Belarus significant far beyond that country’s borders.

Russian President Vladimir Putin has made clear that, six years after the pro-Western revolution in Ukraine – which saw Russia respond by seizing and annexing the Crimean Peninsula – he is not about to let another Russian ally switch sides. The Kremlin recently provided the regime of Alexander Lukashenko with a US$1.5-billion economic lifeline, and has expanded its presence at joint military drills in Belarus, which are taking place this month close to the Polish border.

While politicians in Washington, Brussels, London and Ottawa view the crisis in Belarus primarily as a moral one – pitting Mr. Lukashenko’s authoritarian regime against a population that supports challenger Svetlana Tikhanovskaya – front-line states such as Poland and the Baltic countries also perceive a growing security threat on their borders.

“The closer you are, the better you understand the situation,” Poland’s deputy foreign minister, Marcin Przydacz, said in an interview last week at his office in Warsaw. “We are the eastern flank of NATO, the eastern flank of the EU – that’s why we are trying to tell them that [the crisis in Belarus] is not only our business, it’s the business of the whole Euro-Atlantic community.”

Mr. Przydacz said he was worried that Mr. Putin would use Mr. Lukashenko’s weakened position to expand Russia’s control over Belarus, which was ruled from Moscow while it was part of the Soviet Union.

“President Putin wants to subordinate Belarus, to keep it as close as possible. At some point, even strip Belarusians [of] their sovereignty or integrate it into a kind of union state. But Belarusians are an independent nation. They don’t want to be part of Russia.”

Most of the drama so far has taken place on the streets of Belarusian cities, where crowds of pro-democracy protesters have staged demonstrations every day since an Aug. 9 election that they believe was won by Ms. Tikhanovskaya. Raising the stakes, Mr. Lukashenko – who claims to have received an improbable 80 per cent of the vote – defiantly inaugurated himself at a secret ceremony this week.

In reply, tens of thousands of protesters marched through the streets of Minsk on Sunday in a demonstration dubbed the “people’s inauguration” of Ms. Tikhanovskaya, who is currently in self-exile in Lithuania. Riot police used tear gas and stun grenades against the crowd, and at least 200 people were arrested.

While the opposition has been careful to say they are neither pro-Western nor pro-Russian – they just want to be rid of Mr. Lukashenko – their fate is nonetheless tangled in geopolitics. As the regime and the demonstrators joust on the streets, both Russia and NATO have been building up their military presence in the wider region.

NATO has since 2016 deployed what it calls an “enhanced forward presence” in Poland and the Baltic states – including Canada’s 540-soldier deployment to Latvia, where it leads the NATO mission in that country. The build-up is part of the alliance’s response to Russia’s capture of Crimea, an act that deeply unnerved Poland as well as the Baltic states, which all spent much of the 20th century under Russian occupation.

The deployments are not considered large enough to halt a theoretical Russian invasion. They are instead meant to make clear that attacking any NATO member, no matter how small, is the same as attacking the entire 30-member alliance.

The largest of the forward deployments is in Poland, where there are 4,500 U.S. troops stationed. Around 850 of those are stationed in the city of Orzcyz, less than 100 kilometres from Suwalki, and convoys of military equipment are a common sight in the region. (The Globe and Mail saw three columns of troop-carrying trucks in a 24-hour period.)

Meanwhile, Mr. Putin’s political and economic support for Mr. Lukashenko – who has long resisted Mr. Putin’s push to integrate Russia and Belarus – appears to have come at the price of an increased Russian military presence on Belarusian soil.

After the two leaders held a closed-door meeting in the Russian resort of Sochi on Sept. 14, the number of Russian troops taking part in joint “Slavic Brotherhood” exercises with the Belarusian military – which were held over the past two weeks near the city of Brest – tripled from 300 to 900 soldiers. The expanded drills included tank, artillery and paratrooper units, while Russian strategic bombers flew along Belarus’s borders with Poland, Lithuania and Ukraine.

The first phase of the drills concluded Thursday, but Mr. Putin and Mr. Lukashenko have said they will now take place on a monthly basis, meaning Russia has effectively set up a forward base near the Polish-Belarusian border.

“We now had a much larger Russian military presence in Belarus than was planned, and the activities are far less innocuous than was envisioned,” said Keir Giles, a specialist on Russia and Eurasia at Chatham House, a London think tank. “This seems to be a show of force – but the question is: for what purpose? Is it really intended to frighten off the imaginary NATO threat? Or is it a means of introducing a Russian military presence into Belarus by stealth?”

Russian analysts say that the Kremlin – after watching NATO absorb its Cold War allies in the 1990s and in the early 2000s – isn’t willing to tolerate a pro-Western government in Belarus, which under Mr. Lukashenko has been Russia’s closest military ally.

“The hypothetical shift of Belarus would mean a lot of negative consequences for Russian military security,” said Fyodor Lukyanov, editor of the Russia in Global Affairs policy journal. “Maybe it’s a little bit old-fashioned, but it’s still impossible for Russia to accept Belarus with a Western orientation.”

The example of Ukraine, where pro-Western crowds overthrew the Kremlin-backed Viktor Yanukovych six years ago, plays heavily on the Kremlin’s thinking, Mr. Lukyanov said in a telephone interview from Moscow. Russia believes the West supported the revolution in Kyiv because it didn’t understand how far Mr. Putin would go to protect Russia’s interests there, most notably the Russian naval base in the Crimean port of Sevastopol.

As a result, many in the West were shocked by Russia’s moves to annex Crimea and to provide military support to separatists in Donbas, another region of Ukraine. The U.S., EU and Canada responded with economic sanctions against Moscow, as relations between Russia and the West plunged to a post-Cold War low.

The stepped-up Slavic Brotherhood exercises were meant to warn the West to keep its hands off of Belarus, Mr. Lukyanov said. “Some people blame our authorities for not being clear enough with the West that engagement with Ukraine would lead to very severe consequences. This time, it’s very different, and Putin is very clearly indicating that there is a military option.”

No one believes war is imminent, but no one believed the crisis in Ukraine would escalate as quickly as it did six years ago either.

If tensions over Belarus rise, “Russia might be tempted to provoke some crisis with the Baltic states, in order to show that Western security structures – NATO and the EU – are empty shells, that they’re outdated and do not function,” said Adam Eberhardt, director of the Warsaw-based Centre for Eastern Studies.

In which case, the Suwalki Gap – and NATO’s ability to support its smallest members – would quickly transform from a theoretical to a very real concern for the alliance, Mr. Eberhardt said. “Geography indeed matters.”