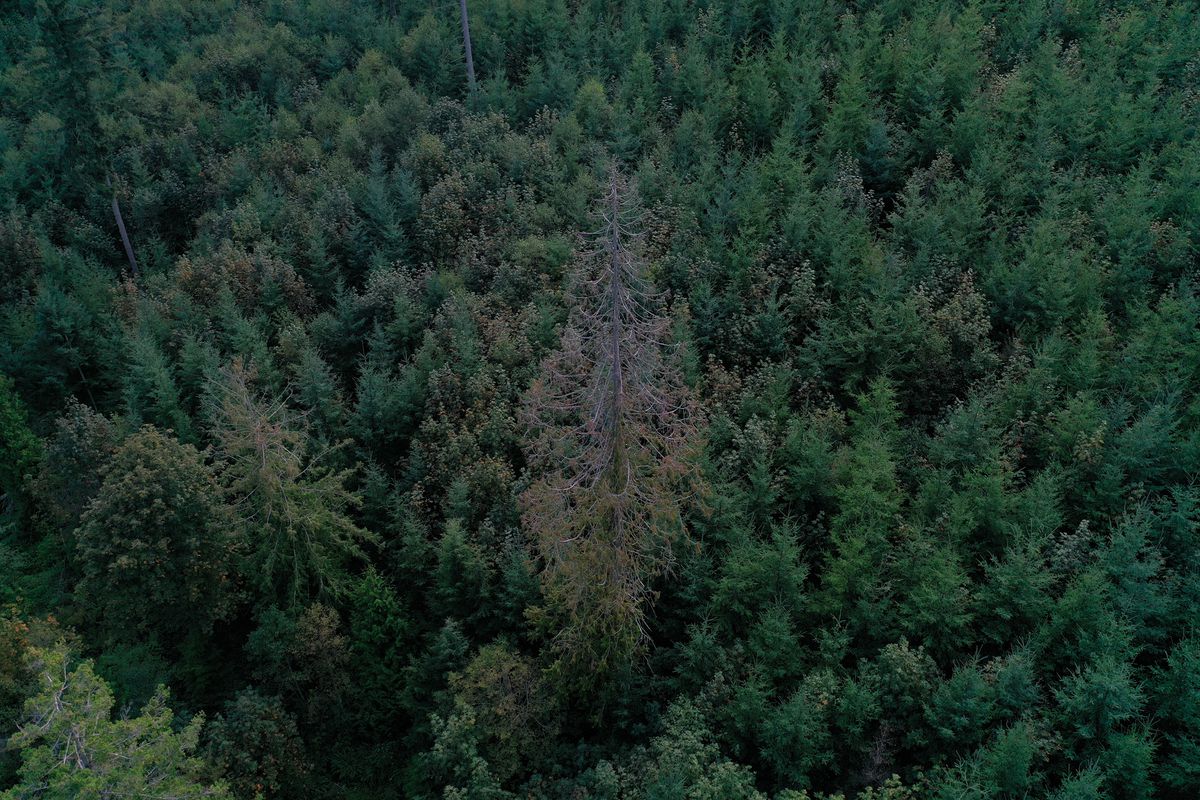 The first evidence of drought-induced stress on the Western red cedar appears as red branch tips, a process called flagging. The tree can still recover at this stage, but if its thirst persists, it will die. And, along British Columbia’s coast, large numbers of the province’s official tree are dying as climate change threatens a conifer that is highly valuable both to the forest industry and to Indigenous peoples.

In recent decades, B.C.’s coast has been experiencing hotter, drier summers, which are pushing the boundaries of where these long-lived trees can survive. As scientists probe genetics and replanting regimes to provide hope for the future, Indigenous communities are seeking protections to ensure they will have access to the large, culturally significant trees for future generations.

In the early weeks of September, Joe Martin, a Nuu-chah-nulth master carver, worked to fashion a five-metre-long traditional dugout canoe out of a massive Western red cedar, releasing an aromatic scent with each cut. The tree, which grew near Nahmint Lake on Vancouver Island, was at least 800 years old. It is treated with reverence: Each scrap block of wood is gifted to another carver so that nothing goes to waste.

“One of the teachings of our culture,” he said, “is that Mother Nature will provide for our needs, but not our greed.”

In his workshop, Mr. Martin traced his finger over the exposed tree rings to study the history of the region’s weather. The tree survived through drought and deluge. “There’s a period where the growth rings are really big, like there was a lot of rain in the few years,” he said. He paused, counting. “And then there was probably about 80 or 90 years went by, and then there was not much rain, for about 19 years.”

Compounded by the loss of the old-growth giants to industrial logging and development, trees like the one in Mr. Martin’s studio near Tofino are increasingly rare.

“People had access to some of the best timbers in this region for a long, long time,” he said.

Western red cedar is described by coastal First Nations as the tree of life, and it has, for millennia, provided the material for canoes, totem poles and long houses. Mr. Martin learned his trade from his father, but he is worried that future generations of Nuu-chah-nulth will not have the same opportunity.

The canoe he is working on will take hundreds of hours to complete, and the final product will fetch roughly $4,500 per linear metre. The excess wood blocks are passed on to other carvers, who will make masks worth thousands of dollars apiece.

This tradition is both culturally and economically important to Mr. Martin’s community, and every log is treated as a valuable resource that must be managed sustainably.

Researchers believe the Western red cedar took hold along B.C.’s coast 5,000 to 6,000 years ago. They have become ubiquitous in the work of the Nuu-chah-nulth and other Indigenous tribes of the coast: The grain in the large, old trees runs straight, and the carved wood resists decay, making it ideal for canoes and bentwood boxes.

Paleobotanist Richard Hebda, adjunct professor at the University of Victoria, helped develop climate models for Western red cedar in his role as curator of botany and earth history at the Royal British Columbia Museum. By his calculations, the regions that have supported Western red cedar will lose their foothold in the coming decades – and he can see the future unfolding as he observes the die-off of cedars in his own Saanich neighbourhood. “There’s no question whatsoever. They are declining,” he said.

Western red cedar can reach 60 metres in height and they have flourished in mixed forests along the coast because of their ability to begin life in the low light found beneath the canopy of an old-growth forest. But they have shallow roots and need a steady supply of moisture.

The flagging that Dr. Hebda frequently spots now, he sees as a red flag of climate change. His projections show that “within decades, certainly by the end of the century, much of the areas that now supports Western red cedar will no longer support them.”

These trees are also highly valued by the forest sector. A 2018 study by Natural Resources Canada found that Western red cedar is one of the most valuable commercial tree species in British Columbia, generating more than $1-billion in economic activity annually and providing nearly 1,900 jobs.

Dr. Hebda says the impact of climate change on Western red cedar can’t be diverted – the path is set. But for the industry, he believes the way forward is to focus on ensuring that plantations for second-growth trees are well-designed to adapt to the shift that is coming. And, he would steer away from the harvest of old-growth trees that take centuries to replace. “Figure out strategies for conserving them, and then put your effort into where you grow them,” he said, “rather than hoping that Mother Nature will provide – because Mother Nature is moving in some different directions.”

Such work is underway.

Forest pathologist Mike Cruickshank studies the impact of stress, such as drought, on trees at Natural Resource Canada’s Canadian Wood Fibre Centre. He’s part of a team leading a series of projects to answer questions about the future of British Columbia’s Western red cedar.

Despite the great value this species represents, data on how it is faring are sparse. Mr. Cruickshank is participating in a multiyear research project on Western red cedar, taking advantage of work that began more than half a century ago.

In 1968, forest pathologists with the Canadian Forest Service began an experiment near Salmon Arm, in the province’s interior, to measure the impact of logging on root disease. They planted seedlings of Douglas fir, lodgepole pine, Western red cedar, and other species, and have recorded tree mortality ever since.

Now those test forests may help researchers find options for treatment. They hope to unlock which factors make some Western red cedar more drought-tolerant than others. “It’s a classic genetics question,” Mr. Cruickshank explained. “Does it matter what parents these trees come from, or is the geographical area they come from more important?”

As well, it may be that Western red cedar will do better in drought conditions without competition from Douglas fir. The research team hopes to determine how to shape the next generation of Western red cedar. The boundaries of where these trees have thrived in the past is moving, as some regions become warmer and drier. “So in some cases, they’re looking at moving with boundaries,” Mr. Cruickshank said. At higher elevations or further north, these trees may be better adapted in the future.

Areas suitable for growth of

Lori Daniels, from the University of B.C.’s Faculty of Forestry, says the decline of Western red cedar has been measurable over the past 25 years because of regional droughts, making those surviving trees in old-growth forests all the more important to protect for the future.

She sees an opportunity now, in the upheaval wrought by the COVID-19 pandemic, to rethink how the remaining old growth is managed. The cultural value of these trees to Indigenous communities needs to be better recognized, she said, as the supply of old-growth cedar dwindles.

“As forest ecologists, we’ve been watching the signs and signals that things are not going well,” Prof. Daniels said. “It might be that some of the changes that become our new normal of how to live post-COVID-19 mean some modifications, and some compromises, to what we used to think was important to our quality of life. But on the flip side, those compromises might actually give us a better quality of life in the longer term.”

Forest ecologist Julie Nielsen has worked as a tree planter, forest industry engineer, biologist and wildfire fighter. She now hunts big, old trees, as she completes her PhD on the cultural use of Western red cedar by Indigenous peoples on Vancouver Island.

For her thesis, she spent three summers scrambling through thick forests and clearcuts, seeking out increasingly elusive old-growth specimens. Her work has been in collaboration with the Nanwakolas Council, representing five First Nations, to develop a policy to protect large cultural cedars – otherwise known as canoe logs – in their traditional territories. Those territories span a large section of northern Vancouver Island and a chunk of the central coast of the mainland of British Columbia.

“I had to go and catalogue over 500 large cultural cedars as part of my research, and it is extremely hard to find those trees now,” she said. As well, she interviewed 13 master carvers to find out how their carving practices have changed over the last 50 years.

“They used to be able to get their large trees from the beaches and from going out in boats and finding them either growing on the shore or just having fallen. … These trees aren’t readily accessible anymore because the valleys have all been harvested decades ago, and the trees that are on the landscape now are few and far between.”

Gina Thomas spent two decades working in the forest industry on Vancouver Island before taking up a post with the Tlowitsis Guardian Watchmen, a stewardship team for her First Nation near Campbell River, on the east side of Vancouver Island. All those years in the woods give her first-hand knowledge of where the big trees are. And the log that Mr. Martin is carving in his workshop, she said, is exceptionally rare.

“Those would be like the absolute primo trees, which I think I’ve only seen a couple of in my lifetime,” she said.

As a Guardian Watchman, Ms. Thomas has helped develop the protocols that are meant to ensure that the access to these trees for cultural purposes don’t disappear in this generation.

“One of our main goals is to more or less be the protector and stewards of our territory. Of course in our backyard we have some of the highest amounts of Western red cedar compared to a lot of our neighbours,” she said. “There is a spiritual aspect – this is the tree of life. It’s what gave us everything we needed to survive, for transport to live, tools, the clothing you wore. And then there’s also our ceremonial culture – where we use the cedar to build totem poles and to make masks and other things.”

The Nanwakolas Council has developed a new protocol that offers a way forward, which its members hope governments and the forest industry will accept. The plan would allow industry to continue logging, but the most exceptional and rare cedars, more than 1.5 metres in diameter, would be left standing for Indigenous communities. This is a strategy for an intergenerational supply of large cultural trees, looking out into the future for the next 300 years.

With the stress of climate change on one hand, and logging on the other, Ms. Thomas said the last of the giants need to be protected with the long term in mind. “We’re hoping to preserve some very nice trees from the future generations.”

From the forest to the sea

For carver Joe Martin, turning cedar into canoes in the Nuu-chah-nulth way is an art he inherited from his father and feels it’s his duty to preserve. Photojournalist Melissa Renwick visited his Tofino workshop to see how he does it.