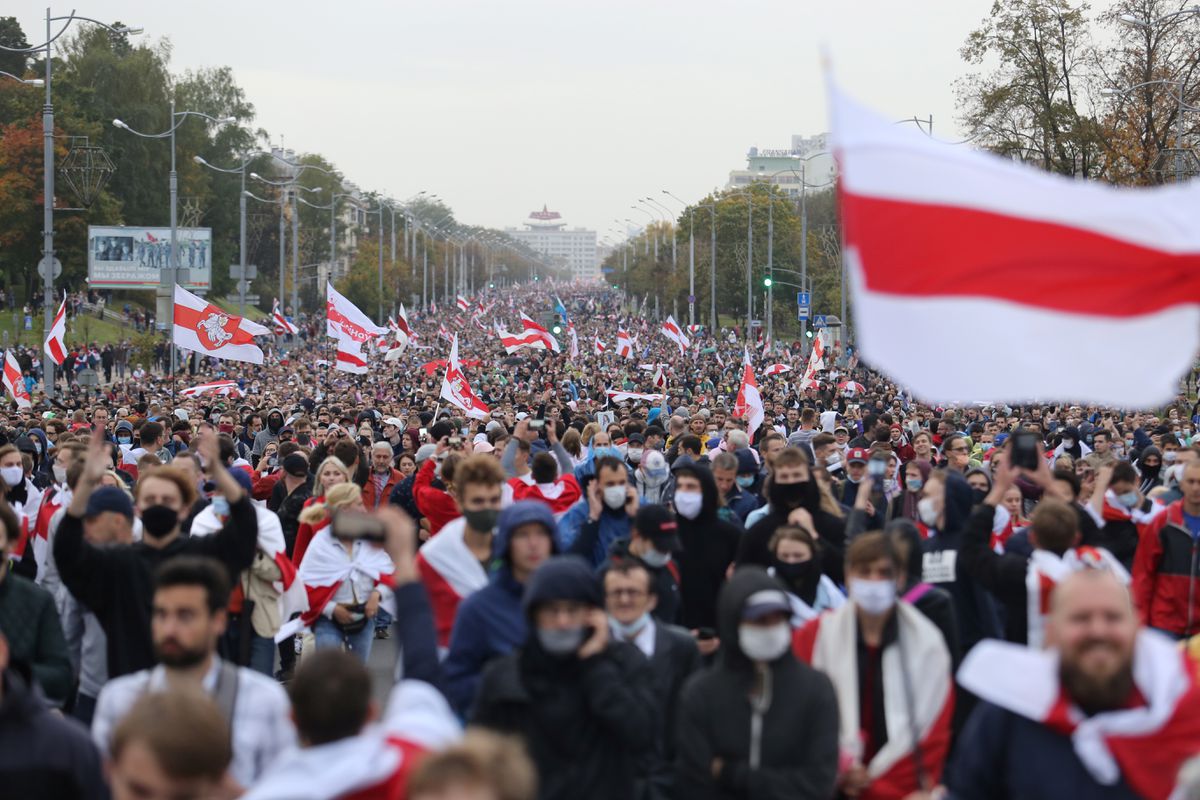 Protesters chanted “imposter” and “Sveta is our president” as they marched through Minsk and other cities decked out in red-and-white opposition colours. At least 200 people were detained, the interior ministry said.

Some dubbed the protest a “people’s inauguration” of Sviatlana Tsikhanouskaya, Lukashenko’s main opponent who fled into exile after the Aug. 9 election that Lukashenko’s opponents say was blatantly rigged to hand Lukashenko a sixth term.

Lukashenko denies electoral fraud and was inaugurated on Wednesday in a ceremony held without any prior announcement, sparking more protests and condemnation from the European Union, the United States and Britain.

French President Emmanuel Macron said in comments in the French press Lukashenko must step aside.

“We are witnessing a power crisis in Belarus with an authoritarian administration that is not able to accept the logic of democracy,” Macron told le Journal du Dimanche in comments published on Sunday.

“It is clear that Lukashenko must go.”

Lukashenko retorted that, under Macron’s logic, the French leader should have resigned two years ago when the “yellow vest” protest for economic justice began and that mass demonstrations had become commonplace in France.

He offered to help negotiate a peaceful transfer of power between Macron and those protesting against the French authorities.

“As an experienced politician – to an immature one – I want to advise Mr. Macron to look around less, and instead finally deal with the internal affairs of France,” Lukashenko was quoted by the official Belta news agency as saying.

Russia said the EU’s decision not to recognize Lukashenko as the legitimate president contradicted international law and amounted to indirect meddling in the country.

Buoyed by the support from traditional ally Russia, the 66-year-old Lukashenko, a former Soviet collective farm manager who has been in power for over a quarter of a century, shows no inclination to resign.

Riot police pulled people out of crowds and hauled them away into vans, a Reuters witness said. Several metro stations were shut and the mobile internet disrupted. Some protesters wore fake crowns to mock Lukashenko’s inauguration.

Local media footage showed masked security forces spraying a substance from a can into the faces of people in Gomel, while the protesters retreated shouting “fascists”. One detainee managed to escape from a prison van as people cheered.

In Minsk, helmeted security forces went inside a pizzeria to detain someone as customers looked on.

A group of anonymous hackers has started leaking the personal data of police officers in retaliation for the crackdown on protests since the election.

On Sunday, it released another batch of data from more than 1,000 police stationed in Gomel in revenge for the treatment of the protesters there.

The Belarusian government typically releases the data for the total number of people arrested on the day after a protest.