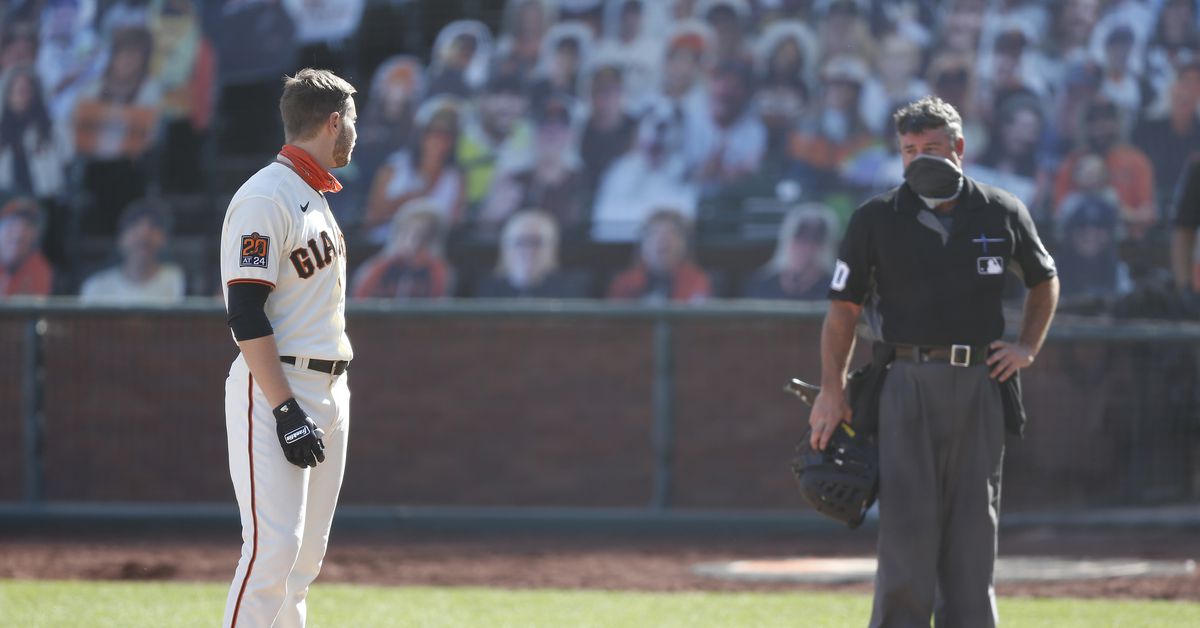 If I had told you in mid July that every game this season would matter, you would have taken it.

If I had told you that every inning this season would matter, you would have taken it.

You didn’t expect the San Francisco Giants to be there, in the final inning of the final game of this nauseatingly bizarre season, with the postseason within view.

But they were. And you might think that would make the 5-4 loss to the San Diego Padres that ended the regular season and the postseason dreams in one blow more bearable. And perhaps you’re right; perhaps in a day or a week or a month, losing at the last possible moment will be a silver lining.

But right now it stings.

And it stings in very large part because it felt like the Giants didn’t get the adequate chance to win that they’re supposed to be allotted.

But this is the rare exception where the Giants were very clearly hurt by what was — I say with zero hyperbole — the worst umpiring performance I have ever seen in a Major League game.

I’m not saying that Rob Drake was biased, or that he told a family member to put money on the Padres. I’m not saying there was any intent behind his miserable performance.

Normally I recap what the Giants did. Today I’m going to recap what Rob Drake did, in chronological order.

The situation: It’s the third inning, and Austin Slater is at the plate, with one out and the bases empty. The game is tied 1-1, and the heart of the order is behind him up. The count is 2-2.

Mike Yastrzemski would follow up Slater’s at bat with a single, which would have been a rally had Slater reached safely.

The situation: It’s the seventh inning, and Mauricio Dubón is at the plate, with a runner on first and no outs. The Giants trail 5-1, and are trying to get back in the game. The count is 2-2.

Brandon Crawford would homer in the next at bat.

The situation: It’s still the seventh inning, and Austin Slater is at the plate, with a runner on first and one out. The Giants have scored two runs in the inning to cut the deficit to 5-3. They’re trying to gain momentum, and their best player is on deck. The count is 2-2.

Mike Yastrzemski would walk, but the rally would fail. With the season on the line, the Giants seventh inning rally was cut short by not one, but two third strikes that were substantially off the plate.

The situation: It’s the eighth inning, and Evan Longoria is at the plate, with the bases empty and one out. Wilmer Flores has already hit a home run in the inning to pull the Giants within 5-4, and they’re looking to add momentum. The count is 3-2.

The Giants had the bases empty and two outs, instead of one on with one out. The rally that never got a chance to start did not go anywhere.

If you’re wondering, that red 4 that’s way off the plate was also a called strike.

And that’s how the season ended.

Lest you think I’m just being a nerd showing you the graphs, here, watch the video of how the Giants season ended and tell me what you think.

I went through the pitch frames from each Giants at bat in the game, and here are the final tallies:

That’s just the egregiously bad strike calls; it doesn’t even include the mostly bad ones, like this pitch to Brandon Belt that probably grazed the zone if you break out your microscope.

Also, in the interest of honesty, not all of Rob Drake’s bad calls hurt the Giants. Some actually helped them. Take, for instance, the following at bat by Wilmer Flores. If the first pitch, which is way off the plate, doesn’t get called for a strike, then he might not swing at the second pitch, which is also way off the plate. And if he doesn’t swing at the second pitch, then he doesn’t hit it over the fence.

Had they won on Saturday, when they were lifeless, they’d be in the postseason.

Had they won on Friday night, when they took a 2-run lead into the final inning, they’d be in the postseason.

They have themselves to blame for getting behind the eight ball and needing a bizarre and beautiful comeback.

But all year long they’ve gotten behind the eight ball and had bizarre and beautiful comebacks.

They earned the right to have an honest chance at one more.