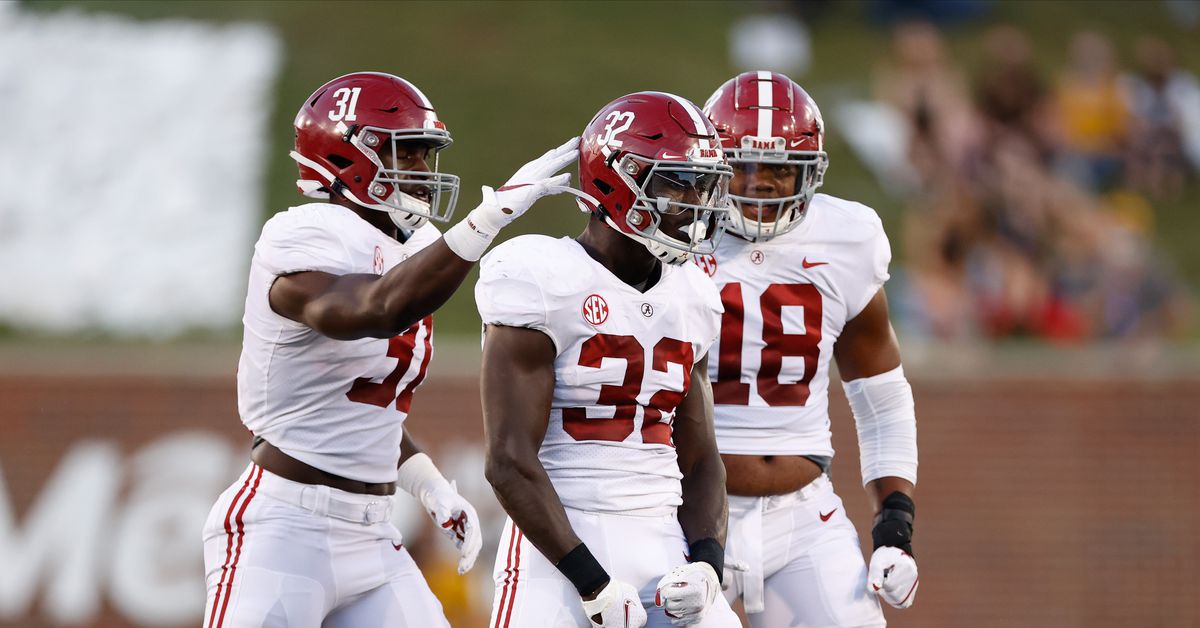 Happy Monday, everyone. It was a fine start to college football season for Alabama fans, as the Tide came out of the gate strong while most of the other SEC contenders looked a bit rough. Michael Casagrande has a few wrap ups for you.

— There was some frustration with the Alabama defense after Mizzou scored 13 points in the fourth quarter. It’s worth noting the Tigers managed just 40 first-quarter yards. Yards per Missouri play by quarter:

— The starting offensive line did a great job keeping Mac Jones’ jersey clean. The starting QB was neither sacked, nor hurried (statistically) in his 18-for-24 passing night. He did take that one shot on the early TD to Waddle but he had time to operate all evening.

The first team offensive line was outstanding, though there were some depth concerns. Hopefully the staff gets a solid rotation ironed out in case it is needed down the road.

Dribbling away from the scene was either the ball, his helmet or (God forbid) what was inside that helmet.

Robinson kept the ball and his noggin. His headgear wasn’t as fortunate. A loss of 16 yards on the sack led to a Mizzou field goal.

“That was purely on me. I gotta throw the ball away,” Robinson said.

Actually, that was all on No. 2 Alabama in an opener delayed so long by COVID-19. The play gave us a taste in the moment of what Bama can be in 2020 if the coronavirus — and its new defensive pieces — cooperate.

The whole defensive front was just nasty, and provides a glimpse of what could have been last year with a healthy LaBryan Ray and Dylan Moses. Having that veteran leadership on the field is so important.

Also, Will Anderson was a holy terror.

On the first one, described in the excerpt, Anderson was left unblocked as the read man. He has already established himself as an edge rusher too explosive for that, and we likely won’t see it again. That second clip is even more impressive, as he simply shot the gap and could have very easily caused a fumble had that been a straight handoff. This dude is going to make some plays.

Cecil talked about the QB situation.

For both quarterbacks, there was also the inevitable comparison. It wasn’t spoken much except in those realms of the social media world where only the foolhardy tread. Neither one was Tua Tagovailoa.

I don’t think anyone expected Tua, but Mac played great. If we can get that kind of performance out of him all season, this team may well win the whole thing. Mac will endear himself to fans with quotes like this, too.

Mac Jones on getting hit: “I love getting hit. There’s nothing better than getting hit and throwing the ball. You know what, it’s part of the game and it really gives a little energy.”

Mac has already shown some cojones by leading Alabama to TD drives after both Iron Bowl interceptions. Standing in there and delivering that strike to Waddle on the first TD pass knowing that he was going to take a shot confirmed it. Jones isn’t a Brett Favre or Tom Brady talent, but he has a little of that attitude. Many a college passer would have bailed the pocket on that play.

So, everybody is bowl eligible this year.

It was a big week in bowl world. The Division I football oversight committee recommended that every FBS team playing football this season should be eligible to play in a bowl game.

It still needs to be approved, but that is likely just a formality and should come either Oct. 13 or 14 from the Division I council. Among the eligible teams: those from the Pac-12, Mountain West and MAC, all of which announced this week they will play this fall.

With so many G5 conferences shutting down, you may see a 3-7 SEC team in a bowl. Weird times.

Chris Low moved Alabama to the top of his power rankings.

Tua Tagovailoa is gone along with a pair of receivers, Jerry Jeudy and Henry Ruggs III, who were also first-round NFL draft picks back in April. But Alabama looked as dynamic as ever offensively in its season-opening 38-19 win over Missouri. The Crimson Tide cruised to a 38-3 lead early in the third quarter, and even though they didn’t finish the game as well as Nick Saban would have liked, there’s a lot to like about Jaylen Waddle and Najee Harris, who combined for all five of Alabama’s touchdowns.

May they keep it rolling. The money is certainly rolling in, betting that they will.

Circa Sports posted the first betting line for Texas A&M at Alabama, installing the Tide as a 13-point favorite on Sunday afternoon.

Bama money flooded the market, bumping the number as high as -17.5 by Sunday night.

That may seem steep considering Alabama beat Missouri by 19.

Texas A&M was widely considered a top 5 team before Saturday. We will see if their lackluster performance was just some weird offseason hangover, or if Alabama blows their doors off in Tuscaloosa.

Holt is a 6’6” four star, ranked as the #123 player in the nation. He reportedly needs to put on a little weight but is quite the marksman from the arc. Sounds like an Oats project for sure.

That’s about it for today. Have a great week.