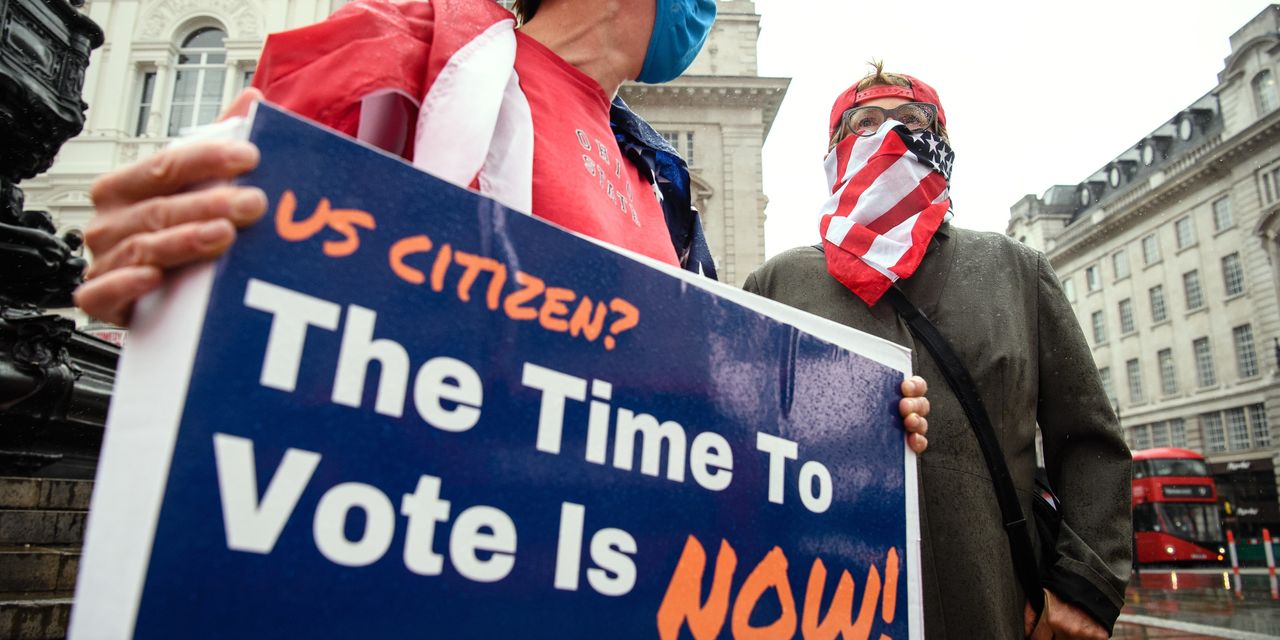 Investors may be happy to see the back of September, which is stacking up as the worst month since March for the S&P 500
SPX,
.
That is as the five biggest technology-related stocks — Facebook
FB,
,
Apple
AAPL,
,
Amazon.com
AMZN,
,
Netflix
NFLX,

— are together, poised, for the weakest monthly stretch on record.

The screens are green for Monday though, as politically charged October beckons and a presidential debate on Tuesday that could be a mood-setter for stocks.

A poll from financial advisory organization deVere Group says the number-one investor worry in the world right now isn’t who wins, but a contested U.S. election that could drag on for weeks. But our call of the day from Danske Bank’s global head of research, Thomas Harr, says who wins the White House matters less than a united victory.

The prevailing investor wisdom has gone something like this: stock markets fear a win by Democratic candidate Joe Biden because he’ll hike corporate taxes to pay for more fiscal spending. But a win by President Donald Trump — should he take both the House of Representatives and Senate — means a rally for equities, due to potential tax cuts.

“Where we differ from consensus is the impact on equities in case of a Democratic sweep, which we believe could turn out to be positive for U.S. equities due to fiscal expansion,” says Harr.

“A possible knee-jerk negative effect on equities, corporate confidence and business investment from fear of higher taxes should be short-lived as the market realizes that Biden is unlikely to push ahead with all his tax threats,” says the analyst, who expects corporate income taxes would rise to less than the 28% rate that Biden has suggested, from 21% currently.

That is because, even in a sweep, Democrats would at best win a slight majority in Congress, so it is reasonable to expect higher spending won’t completely be offset by higher taxes. Harr says it is doubtful that Trump will manage a clean sweep, even if he wins.

“Surveys suggest that Democratic voters support health care, infrastructure and climate investment at the expense of higher deficits,” he says. And that tax burden will fall mostly on higher earners, and there will be less trickle-down to lower earners.

Feeling that election uncertainty? UBS says if we get a contested election outcome, the dollar will suffer, so more reason to start stocking up on gold, now.

are surging, with European equities
SXXP,

along for the ride. The dollar
DXY,

are both taking a hit.

Trump paid zilch in federal income taxes in 10 of the past 15 years, $750 for both 2016 and 2017, and has hundreds of millions worth of debt coming due, claims the New York Times. Labeling that report “fake news,” Trump told a news conference that he “paid taxes” without elaborating.

Devon Energy DVN and WPX WPX shares are climbing after the energy companies announced a merger of equals in an all-stock deal valued at $12 billion.

says it is in advanced talks for a potential £2.9 billion ($3.7 billion) cash offer for U.K. betting group William Hill
WMH,
.

shares are tumbling after the drugmaker’s COVID-19 vaccine trial was put in a “partial clinical hold.”

won a court appeal on Monday to keep operating in London.

A Trump administration ban on the popular TikTok video app has been halted, at least temporarily, by a U.S. judge. But Chinese chip maker SMIC is feeling the pain of a fresh U.S. ban.

Monday is quiet for data, but the rest of the week is busy, and it ends with crucial nonfarm payrolls.

More thoughts on the shape of a global recovery to come — forget the ‘V.’

Houston forced to shut down water supply this weekend over a deadly brain-eating amoeba.

A bad hotel review could mean jail time for an American man in Thailand.