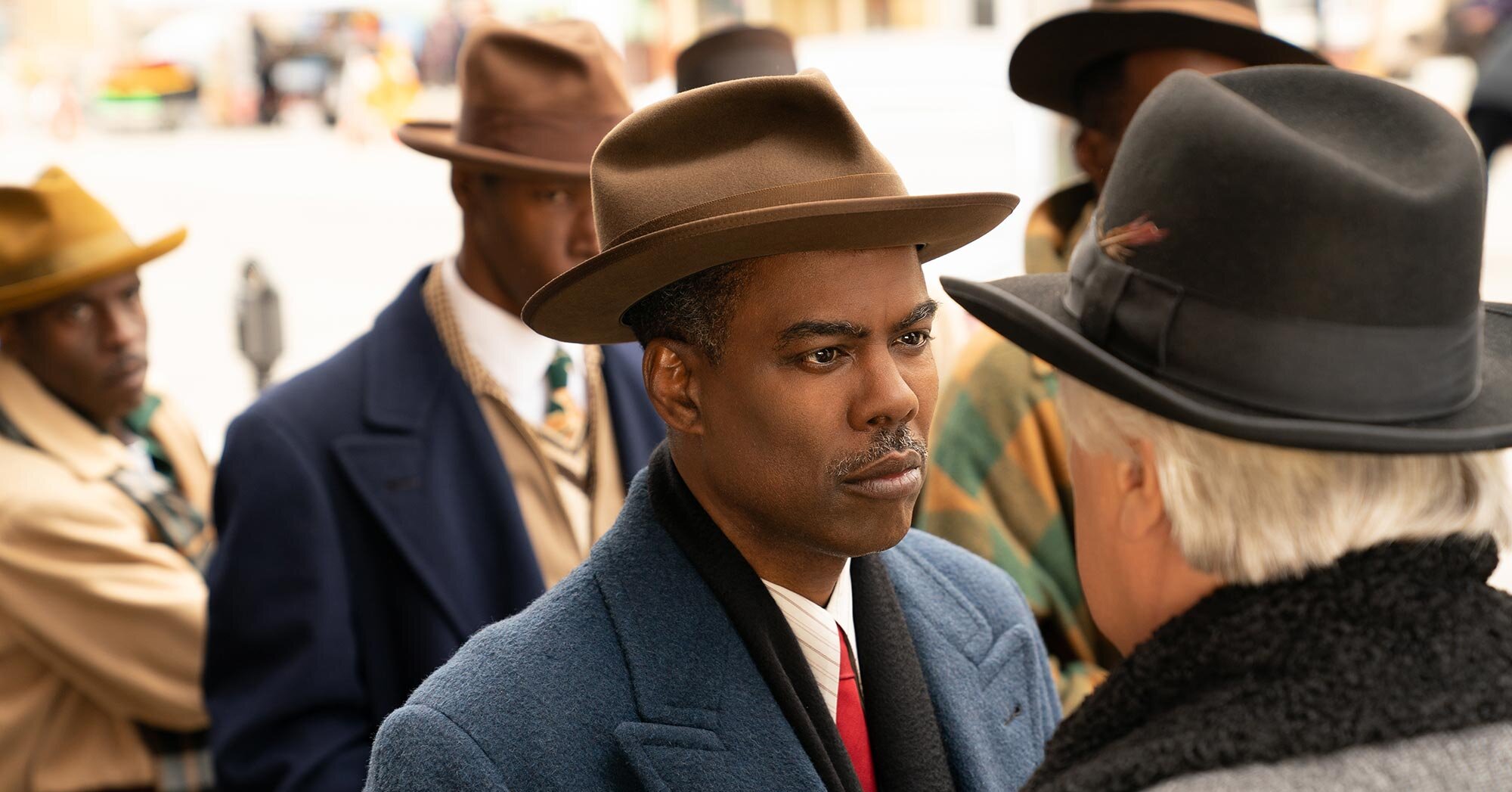 This is a true story about season 4 of FX’s Fargo, which itself recounts a “true story” about events that took place in Kansas City, Mo., in 1950. No names have been changed in this or any ensuing recaps. Out of respect for the dead — and the show — the entirety of its sprawling, complex crime narrative will be told exactly as it occurred. And there’s plenty of plot to relay, even if its premiere installment, “Welcome to the Alternate Economy,” gets things off to a slow, if intriguing, start.

Showrunner (and frequent writer/director) Noah Hawley opens his long-awaited fourth entry in the series — which has been dormant since 2017 — with a history report by African American 16-year-old Ethelrida Pearl Smutney (E’myri Crutchfield), who narrates this lesson while we witness scenes from it, as well as from her own travails at school, where she’s frequently sent to the principal’s office to receive paddle-to-the-behind punishment for being too smart for an African American’s good. Quoting Frederick Douglass, she proclaims that African Americans were criminals from the moment their feet touched American soil, thereby setting the table for the subsequent saga of gangland warfare.

Ethelrida’s bygone tale begins in 1900 with the Jewish Moskowitz syndicate, which runs Kansas City’s underworld from Joplin’s Department Store. In 1920, the Irish Milligan Concern arrives, and in order to establish peace, the two outfits’ bosses — Liev Moskowitz (Andrew Rothenberg) and Oweny Milligan (Ira Amyx) — trade their youngest sons. Alas, as Ethelrida reminds viewers, “Peace don’t last for long.” Milligan’s son covertly unlocks a door that allows the Irish mob to enter Joplin’s and massacre the Moskowitzes, and Milligan has his offspring execute his young Jewish counterpart, telling him, “It’s time for bears to be bears.”

In 1934, a similar face-off occurs between the now-reigning Milligan Concern and the upstart Italian Fadda family, led by Donatello (Tommaso Ragno). They also achieve détente by trading their kids, although rather than his youngest, Oweny once again sends the same son, Patrick, to join his rival’s clan. When the time comes for Patrick to help the Milligan Concern slaughter their enemies, he instead betrays his blood, joining forces with the Faddas to wipe out the Irish. He assassinates his own father, who curses his traitorous son before the bullet ends his life. As this scene plays out, Ethelrida discusses the concept of assimilation — “the process of becoming similar to something” — and wonders how immigrants can become Americans if everyone in the new nation is an immigrant. The answer, her story implies, is to hew to the traditions set forth by one’s predecessors — which, in this case, means gangsters.

Ethelrida emerges from the back of a public bus outside her home, the King of Tears Mortuary, run by her white dad Thurman (singer Andrew Bird), and Black mom Dibrell (Anji White). Showing up at the end of a service, Ethelrida meets weepy nurse Oraetta Mayflower (Jessie Buckley), a racist who, upon learning that the girl is a “product of miscegenation,” says that her study of animals has taught her that Ethelrida’s mom must be dark-skinned because extreme coloration usually prevails in such situations.

Back to Ethelrida’s history lesson. In 1949, the Faddas are confronted by a new challenger to their throne: Loy Cannon (Chris Rock). Loy demands that Donatello cement their deal in blood with a sliced-palm handshake. Though Loy’s right-hand man Doctor Senator (Glynn Turman) is concerned about this course of action, Loy makes the son-for-a-son trade with Donatello, sending his boy Satchel (Rodney L. Jones III) — who’s not happy about it — to live with the Faddas. Satchel is comforted by now-grown Patrick Milligan (Ben Whishaw), whose nickname is “Rabbi.” Narrating, Ethelrida points out that none of these individuals are white; rather, they’re “dagos” and “Negroes” and of mixed heritage, all fighting for the right to be created equal — but, she wonders, equal to what? And who gets to decide? “History is made up of the actions of individuals, and yet none of us can know at the time we act that we are making history,” she muses.

In the 1950 present, Ethelrida finds Loy and his associates speaking with her parents in their kitchen. At her mother’s request, she exits, the door closing in her face in The Godfather-ish fashion.

Loy and Donatello meet at a forested playground, watching their two boys play with other kids. Loy expresses his desire to take over a predominantly Black territory — which Donatello rebuffs — and makes clear that he doesn’t like Donatello treating him like an employee instead of a partner. Things between them are tense, but the two agree to find time for their wives to see their traded-away sons. While the adults converse, Donatello’s son Josto (Jason Schwartzman), the heir sent to live with the Irish all those years earlier, confronts a trio of Loy’s men — including Loy’s biblically named eldest son Lemuel (Matthew Elam) and Opal (James Vincent Meredith) — and immediately exhibits his short temper. An associate stops Josto from violently escalating things.

In a car following this get-together, Josto tells his dad that they should make a move on Loy’s crew, whom he believes don’t respect the Faddas. Donatello thinks it’s Josto who’s lacking respect, and Josto proves him right by stating, “We’re the goddamn Roman Empire. They were born in huts.” At an intersection near a school, their criminal motorcade is halted by a crossing guard. It appears as if two African American men are preparing to ambush them, but right before things turn ugly — and just as Donatello begins having heart attack-like chest pains — the Faddas realize there’s no threat. Still, Donatello is seriously wounded when a pellet from a BB gun shot by a child (playing with a friend) accidentally strikes him in the neck, sending everyone racing to the nearest hospital. Arriving at the facility, they’re kicked out by racist Doctor Harvard (Stephen Spencer), who says he won’t treat “your kind of people.” Confronted by this discrimination, the mobsters head to nearby St. Bartholomew.

Loy and Doctor visit Winckle Savings and Loan, the third-largest bank in the state. Loy, a self-proclaimed “futurist,” informs Clayton Winckle (William Dick) that he has a billion-dollar idea: a credit card, which will allow individuals to appear rich (which is what they covet more than anything) by spending money they don’t yet have, and the banks get rich via high-interest rates. Loy has already been using credit cards in his own banking business in the African American community, but needs a white establishment to help the scheme go mainstream. Winckle, a narrow-minded dolt, rejects this newfangled “financial instrument,” claiming that hard-working folks won’t overextend themselves in this way (wrong), and that banks aren’t about charging clients high-interest rates when times are tough (WRONG).

At St. Bartholomew, Donatello is in stable condition. Oraetta is Donatello’s nurse, and Josto asks her if she has drugs. She claims that they’re only available with a prescription, but when Josto offers to share, she complies, and they snort some white powder behind closed doors. There, Josto learns that Oraetta is from Minnesota and that she prefers big words because “I’ve found in my 36 years on God’s green Earth that it’s absolutely critical to be precise in your use of language so as to avoid instances of misreckoning.” Josto asks Oraetta if she’ll “take care of” his dad, and she both understands his meaning (i.e. kill Donatello!) and appears willing to honor the request.

Over dinner, Ethelrida asks her parents about the identity of the men they met. Dibrell won’t answer, and chastises her daughter for her “histrionics.” Loy returns to his home, where he’s greeted by his kids and his wife of 26 years, Buel (J. Nicole Brooks), who’s happy to hear that she’ll soon see Satchel. Loy promises that Satchel will be back with them “as soon as I see their [i.e. the Faddas’] throats.”

Oraetta tends to Donatello. As she poisons his IV, he realizes she’s a “murderess” and tries to stop her, albeit to no avail. Once the mafioso is dead, Oraetta uses her mouth to remove a ring from his cold dead hand, and places it on her own finger. She then sings a religious song over his still-warm corpse.

While sitting on the funeral home’s porch swing at night, Ethelrida watches Oraetta get off the public bus and walk to the apartment complex across the street; a second-floor light indicates that’s where she lives. Ethelrida is joined by her dad, who admits that they were meeting with Loy because of some (supposedly minor) money troubles, but that there’s nothing to worry about. Though she says she’s too old for such things, she agrees to Thurman’s offer of a bedtime story (The Wizard of Oz) and they head inside as Oraetta stares at them, malevolently, from her window.

An anthology series Inspired by the 1996 Coen Brothers film of the same name.