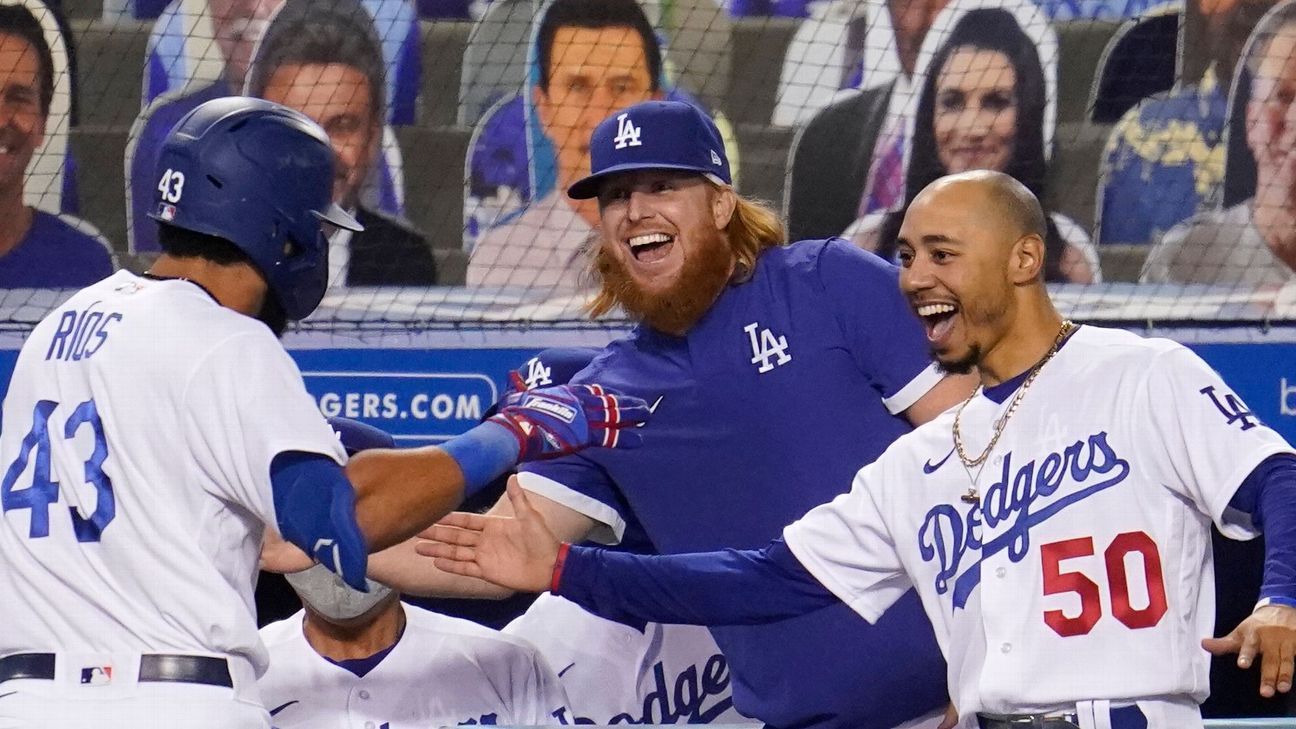 The Washington Nationals did not make it into this year’s MLB playoffs, so Major League Baseball will crown a different team as champion in 2020. Can the Los Angeles Dodgers get over the final hurdle and take home their first championship since 1988? Or could the Tampa Bay Rays win their first title after earning just their second pennant? Will the Cleveland Indians win their first World Series since 1948? Or will we see a complete surprise, like the upstart Chicago White Sox or San Diego Padres, storming back from their successful rebuilds?

Below are the vote totals along with analysis from some of our experts.

Why are you picking the Braves to get through the NLDS?

The Braves have to get past the Reds in the wild-card round — no easy assignment — but their high-powered offense should carry them past the Cubs (or Marlins) in the NLDS. Last year, it felt like the Atlanta lineup thinned out after Ronald Acuna Jr., Freddie Freeman and the now departed Josh Donaldson, but with Acuna, Freeman, Marcell Ozuna, Travis d’Arnaud and Adam Duvall, you have five players slugging over .500. Dansby Swanson bats ninth and he’s a tough out. Sure, the Atlanta rotation is thin, but the bullpen has been solid and the Cubs’ offense has struggled all season and it’s not like they have a lot of pitching depth behind Yu Darvish and Kyle Hendricks. Braves in 5. — David Schoenfield

Why are you picking the Indians to get through the ALDS?

Outside of a mid-September stretch when the Indians collectively forgot how to play baseball and lost eight games in a row, they’ve been as good as anyone in the American League most of the season. I am of the belief that Cleveland has the best pitching staff in this postseason, period. Tampa Bay might actually be No. 2 overall there, so I expect lots of low-scoring games. And while their offense isn’t going to win many slugfests, Jose Ramirez, Francisco Lindor & Co. have a penchant for coming through late in close games. — Dan Mullen

Why did you pick the Padres to win the NLCS?

One of 2020’s most exciting teams to watch had a rough final week of the regular season with injuries putting the status of Dinelson Lamet and Mike Clevinger up in the air for the postseason, but that shouldn’t put a dent in Slam Diego’s chances at making a World Series run. The rotation will lean on the likes of Chris Paddack and Zach Davies for strong innings should Lamet and Clevinger not be at full strength, and they’ll depend on relievers Trevor Rosenthal and Drew Pomeranz — who both had strong seasons — to help overcome any potential starting pitching shortcomings. I expect this postseason to be chaotic with the introduction of the best-of-three first round, but San Diego boasts the second-best run differential in baseball and is riding on the backs of Fernando Tatis Jr. and Manny Machado. I expect this team to make a strong run. — Joon Lee

Why did you pick the White Sox to win the ALCS?

Don’t let that No. 7 seed fool you, these White Sox are really good. Sure, it’s a bit of a feast-or-famine lineup — but postseason games often come down to the long ball, and Jose Abreu, Luis Robert, Tim Anderson, Edwin Encarnacion and Eloy Jimenez can all change a game with one swing of the bat. They have a one-two punch at the top of the rotation in Lucas Giolito and Dallas Keuchel and there are some nasty young arms like 2020 draft pick Garrett Crochet and Codi Heuer in that bullpen. — Dan Mullen

Why are the Dodgers your pick to win the World Series?

The Dodgers finished the 2020 season with the fourth-best run differential per game since 1900, even though three of their most important hitters — Cody Bellinger, Max Muncy and Joc Pederson — struggled mightily through most of it. The Dodgers’ depth and talent remains unmatched. They’re as susceptible to the randomness of a short series as anybody, but they feature a deep and versatile bullpen this year, a major advantage given that there will be no days off within the Division Series and Championship Series. That might end up being the key difference. — Alden Gonzalez

The 2020 playoff tournament is a crapshoot, more so than any postseason in baseball history. That’s due to a combination of the best-of-three first round and the fact that all 16 teams have to survive four rounds before they can hoist the Commissioner’s Trophy. Nevertheless, there is simply no reason to pick against the Dodgers. Los Angeles might have challenged the all-time win record if the season had been a normal length. If you think you see a fatal flaw in that roster, you’re overthinking it. — Bradford Doolittle

The injury to Corbin Burnes gives them a favorable wild-card matchup. Their depth is enough to overwhelm whomever they play in the division series. And when the seven-game series start, it’s simply too hard not to bet on the Dodgers’ deluge of talent. This is a special team. There are concerns about the back end of their bullpen, and it may well lose them a game or two. But the Dodgers have spent years building toward this moment. And the highlight of Kirk Gibson limping around the bases and pumping his fist will be replaced by Mookie Betts or A.J. Pollock or Corey Seager or Cody Bellinger or Will Smith or someone in that gifted lineup that finally gets them another ring. — Jeff Passan

I know, going out on a limb here. The Dodgers were my preseason pick back in March and there is no reason to change now. They scored the most runs in our 60-game sprint and only Cleveland allowed fewer (by just four). They were second in rotation ERA, second in relief ERA, hit the most home runs, had the second-most defensive runs saved and won the most games (with the highest winning percentage since the ’54 Indians). There are the best team and this, finally, will be their year. — Schoenfield

Why are the Padres your pick to win the title?

The Padres are essentially tied for first with the White Sox and Dodgers in FanGraphs offensive WAR, which includes hitting, baserunning and defense for the whole team. On the pitching side, they’re somewhere in the top five or six depending on your metric of choice. A key separator is that these are full-season numbers while the Friars have no major injuries from key 2020 contributors and the team also dramatically improved at the trade deadline. Their top two starters — Mike Clevinger and Dinelson Lamet — are both trending toward being available for their first-round starts, but it’s in the cautiously optimistic realm as of Sunday night.

The playoffs will see more weight on the top three starters, best relievers and core hitters, where the Padres have concentrated more value throughout the year. Playing with less rest, youth and enthusiasm are also keys, which Slam Diego leads the league in. Even after all of those little edges in their favor on top of the surface stats, they’re still basically a coinflip with the Dodgers for the best team in the playoffs in my book, but I give the Padres a slight edge. — Kiley McDaniel

Why did you pick the Rays to win it all?

The Rays were my preseason World Series pick, and I’m going to stay consistent here. Tampa Bay started the season out a bit slow but managed to climb atop the AL East with strong seasons from players like Brandon Lowe, a bounce-back from former Cy Young award winner Blake Snell and an always adaptable, ever-changing bullpen featuring strong performances from Ryan Yarbrough, Nick Anderson and Diego Castillo, among others. I believed in the roster-building and front-office philosophies of the organization coming into the year, which best positioned the Rays to take advantage of the idiosyncrasies and maximize the performance of a roster during this 60-game season. I see no reason to shift away from that as this first-place team marches into the postseason. — Lee

Why did you pick the Indians to win it all?

Start with the best pitcher in the sport in Shane Bieber, and on the days he does not pitch, there is a deep, well-run bullpen with myriad strikeout options. The offense is top-heavy but those top options can be great, led by Jose Ramirez and Francisco Lindor. I think it is Cleveland’s time to get back to the Series and edge the Dodgers. — Eric Karabell

Why did you pick the A’s to win it all?

Sixty games shouldn’t cause us to throw aside everything-or even much-of what we know about these players. So while the A’s rotation is filled with bloated 2020 ERAs, I’m holding on to what I knew about Sean Manaea, Mike Minor, Frankie Montas and Jesus Luzardo two months ago: They’re really good. In a crammed postseason, with few days off, Oakland’s pitching depth really stands out, with at least five starters capable of shutting down a top-tier offense and at least seven relievers comfortable in high-leverage innings. — Sam Miller

Why did you pick the Twins to bust up their postseason jinx and take home the title?

Avoiding the Yankees until the League Championship Series — if such a matchup happens at all — shouldn’t be a big deal, but I think it’s a very big deal, considering how much the Yankees seem to be in the Twins’ heads for the past decade-plus. Instead, the Twins draw perhaps the most advantageous Wild Card Series matchup, and their roster is well balanced between offense, defense and pitching, with the latter particularly important in a postseason that doesn’t provide midseries days off. Kenta Maeda is probably the postseason’s most underrated staff ace, and how great a story would it be if the guy who couldn’t crack the Dodgers’ rotation in postseasons past tosses a pair of gems against them as a starter in the World Series? — Tristan Cockcroft