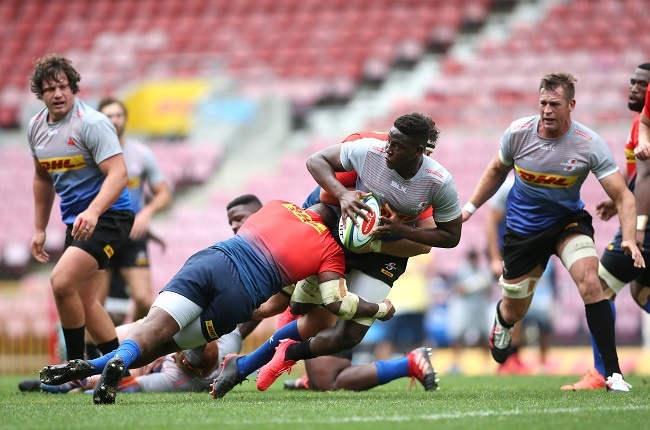 Nama Xaba was superb at Loftus

There’s wasn’t much to get excited about in the Stormers’ second half showing against the Lions this past weekend except for some fine defending and a 23-year-old opensider ready to one day fill Siya Kolisi’s void.

Nama Xaba has had to bide his time at Newlands, trying to muscle his way through a congested pipeline of flankers that not only includes Springboks Kolisi and Pieter-Steph du Toit but also other upcoming stars such as Jaco Coetzee, Ernst van Rhyn and Juarno Augustus.

Granted an opportunity at Loftus, he didn’t disappoint, tackling like a demon and proving a giant at the breakdowns.

“He’s just got such a massive engine.”

Perhaps the most important contribution made by the former Junior Springbok is that he’s gone a long way into reassuring his team’s coaching staff and supporters that the Stormers will have sufficient depth for the upcoming domestic programme should the Springboks indeed have to participate in the Rugby Championship.

“(Lock) Salmaan Moerat was outstanding, ‘Trokkie’ Augustus had a knee operation and this was his first real game back, he was brilliant. There a lots for us to be hopeful about in that respect.”

Meanwhile, in keeping with a general theme that the Capetonians showcased more power and pragmatism than flair, Dobson hopes his team doesn’t get labelled as a combination that is too dependent on it scrum as a weapon.

With a burly Frans Malherbe as its spearhead, the set-piece certainly fired brilliantly against a hapless Lions pack.

“We feel we’ve actually over-relied on it maybe in the past. I was quite relieved when the scrums evened up a bit in the second half. We want to evolve our game past that,” said Dobson.

“I was obviously very pleased with the scrums. I felt it was great that we used other methods of attack when a scrum could’ve been an easier way towards the tryline. Our maul has just been as strong over the past few years. The truth is we want to play a bit more strategically.”