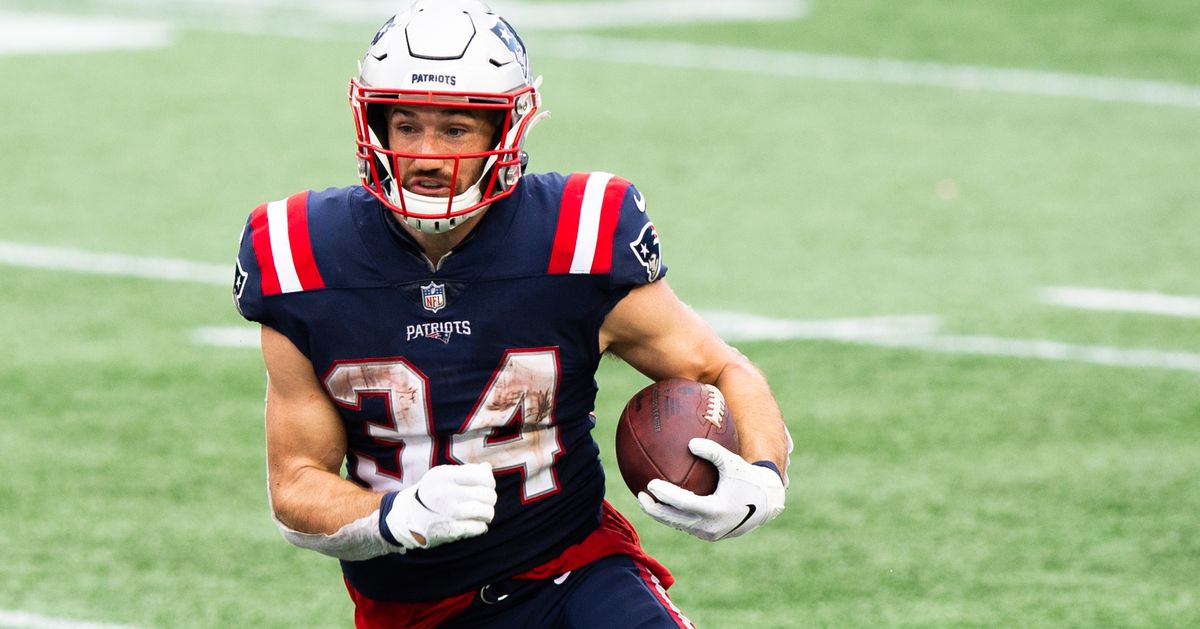 It was your classic New England Patriots win on Sunday afternoon: the defense dominated, the Patriots controlled the ground game, and they pulled away with another monster second half.

Through the first two weeks of the season, it was clear that the Patriots’ offense ran through No. 1 and No. 1 only. However, after a bad second quarter interception from Cam Newton against the Las Vegas Raiders on Sunday, the team committed to running the football and finished the game scoring on its next six possessions.

The Patriots’ running back trio took over in Sunday’s game with Rex Burkhead, Sony Michel and rookie J.J. Taylor combining for 209 yards on 26 carries. We knew the Raiders were suspect against the run — they ranked in the bottom third of the league against the run heading into the game and had been torched by Christian McCaffrey and Alvin Kamara through the first two weeks of the season — but this was still encouraging to see.

Coming off a nice Week 2 performance where Burkhead took a majority of the snaps and chipped in for 49 scrimmage yards while also picking up several key blitzes down the stretch, Burkhead continued his strong start to the season by racking up 49 yards on the ground and 49 yards receiving for three total touchdowns against Las Vegas. Filling in for inactive receiving back James White, Burkhead was the catalyst for the offense in the first half when it seemingly couldn’t get much going offensively.

The veteran scored a pretty touchdown on an 11-yard wheel route where he juked out Johnathan Abrams on his way into the end zone — with 34 seconds remaining in the first half, this was the team’s first TD. Burkhead later scored a 5-yard touchdown when he barreled his way through multiple defenders before leaping into the end zone. He finished off his day with a 2-yard score to put the game out of reach in the fourth quarter.

Burkhead has always been a Swiss army knife for the Patriots, but with White out the last two weeks, he has really stepped up and been a true X-factor for the offense.

Michel started off slow in the first half, which led many to believe he was starting to lose his job to J.J. Taylor: the undrafted rookie saw a lot of snaps in early-down situations in the first two quarters and provided the offense with a much-needed change of pace.

Seemingly due to the uptick in snaps from Taylor, however, Michel started to run a lot harder in the second half while racking up two rushes of 35+ yards. He broke off a 38-yarder early in the third quarter and on the ensuing drive picked up his longest rush of his career, a 48-yarder right up the gut due to great blocking from the Patriots’ offensive line.

Michel finished the day with 117 yards rushing on just nine attempts. He turned in a nice breakout performance at just the right time with Damien Harris eligible to come off injured reserve next week.

When you play as well as Stephon Gilmore has the last few seasons, the bar is set extremely high on what he’s asked to do on a week-to-week basis. However, after an average game last week where DK Metcalf was able to break off a few times, Gilmore didn’t live up to his Defensive Player of the Year honors again on Sunday afternoon.

He took a bad pass interference penalty at the end of the half after Rex Burkhead scored with just 34 seconds remaining. That penalty was his third DPI of the season after just one all of last year. The pass interference on Raiders wideout Nelson Agholor effectively cost the Patriots six points after Derek Carr connected with Hunter Renfrow on a big play prior to hitting Foster Moreau for a 1-yard score to close out the first half.

Gilmore isn’t the worst player out there by any means, but like stated above, when you’re the reigning Defensive Player of the Year, we are used to him being so flawless and playing mistake-free football.

In back-to-back weeks Winovich has popped up as a “Winner” for me. We knew he could get to the quarterback, but he needed to improve against the run in Year Two. He has done just that and has been arguably the most consistent player in the Patriots’ front seven early on in 2020.

Winovich had a pair of tackles tackles, a sack and two quarterback hits — one of them resulting in a Derek Carr fumble when he came off the edge and was able to knock the ball loose. The former third-round draft pick has been a force to reckon with so far this season and has certainly taken a huge jump after a promising rookie campaign.

What Jonathan Jones has to do on a weekly basis is one of the hardest tasks of any player on the Patriots’ elite defense: he’s a slot cornerback who has to chase down the opposing team’s fastest wideout each week.

However, lined up with Hunter Renfrow on Sunday, he got beat on a go route and set the Raiders up at the 1-yard line before time expired in the first half. He then got beat clean off the line of scrimmage for what would have been an easy touchdown to Darren Waller if not for a Devin McCourty pass breakup. Overall, it was a rough day for one of the Patriots’ starter-level cornerbacks who is normally consistent on a weekly basis.

A lot of what the Patriots ask Deatrich Wise Jr. to do each week doesn’t necessarily show up on the stat sheet. On Sunday, however, he found himself all over it. The third-year man turned in one of his best performances since he’s been a member of the Patriots on Sunday: he picked up five tackles, a sack, a forced fumble, and a fumble recovery for a touchdown. Wise Jr. lived in the Raiders’ backfield all day long and made life difficult for Carr and company to get into a consistent rhythm.

A former Raiders third-round draft pick, Calhoun’s second season as a member of the Patriots is building up to be a strong one. While used more in a rotational role, he still is having a regular impact on the game — just ask his former team: the 28-year-old was a difference maker on Sunday. Not only did he team up with Wise Jr. to take down Derek Carr in the end zone on a play that resulted in a touchdown, he also helped force another fumble when he knocked the football out of running back Josh Jacobs’ hands in the first quarter.