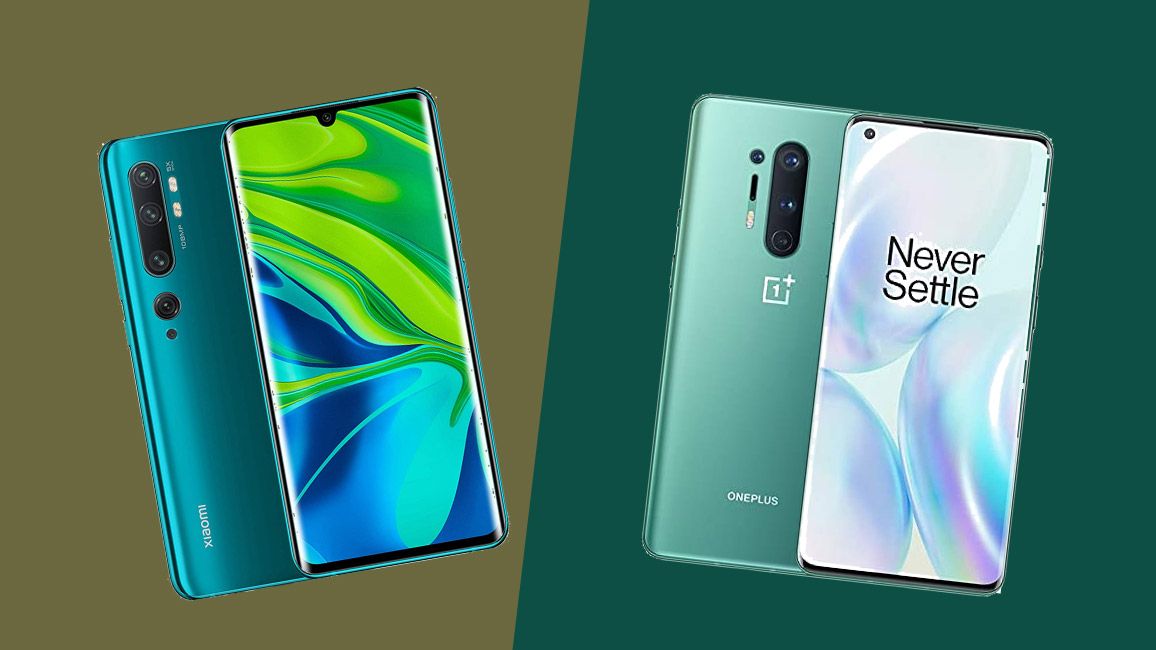 The Xiaomi Mi Note 10 and the OnePlus 8 Pro are two of the best phones we’ve covered in 2020, but they’re not what you’d call direct rivals.

In the Xiaomi Mi Note 10 you’re getting a mid-priced phone with the punch and poise of a flagship. The OnePlus 8 Pro, on the other hand, is nothing less than one of the most capable flagship phones on the market – no clever corner-cutting, no sneaky compromises.

We scored both handsets 9 out of 10 in their respective reviews. So how do they match up? Has Xiaomi managed to ‘do a OnePlus’ on OnePlus, providing serious competition for hundreds of pounds or dollars less?

We’ve observed that the entry-level model of the OnePlus 8 Pro is a little harder to come by these days. It wasn’t available directly through the OnePlus website at the time of writing.

Take the official pricing into account, and you’re looking at a significant disparity of around £340 to £350 between the Xiaomi Mi Note 10 and the OnePlus 8 Pro. Which begs the question: what does that price gap mean in practical terms?

Neither the Xiaomi Mi Note 10 nor the OnePlus 8 Pro are particularly distinctive-looking phones. Both subscribe to the 2020 Android playbook, with aluminium frames sandwiched between curved Gorilla Glass 5 surfaces.

Both phones feature displays that curve off at the edges, which feels modern and high-end in both instances. Less fancy on the Xiaomi Mi Note 10’s part is its central teardrop notch, which is a design choice that feels like it belongs in 2019, or to a more affordable phone.

OnePlus has opted for a more premium punch-hole notch, which we find more appealing. We’re also fans of the more muted, classy satin finish on the rear of the phone.

The Xiaomi’s tone-shifting pearlescent shell is a little more extravagant, like it’s trying harder to stand out. It’s also a rather hefty phone at 208g and 9.7mm thick. You’ll certainly be aware of its presence in your pocket.

You’re likely to notice the OnePlus 8 Pro while you’re carting it about, too, although not quite so much. At 199g and 8.5mm thick, it’s a fair bit lighter and thinner than the Mi Note 10. Don’t get us wrong, it’s still a big phone, but it lands just the right side of manageable.

Both phones have long, lozenge-shaped camera modules that protrude a little too far out from their bodies – a sure sign of the inclusion of some serious camera hardware. The OnePlus 8 Pro camera is positioned centrally, while the Mi Note 10’s is to the side. The latter doesn’t manage to contain all of its sensors, though, which looks a little untidy.

Final bonus points go to Xiaomi for including a 3.5mm headphone jack.

When it comes to relative display offerings, there really is no contest. Both phones offer large AMOLED panels, but the OnePlus 8 Pro pulls ahead in several respects.

But the inch-thick frosting on the 8 Pro screen cake is its 120Hz refresh rate, which translates to a glorious sense of speed and fluidity when undertaking any task on this phone. It can be combined with that super-sharp QHD resolution, too, which remains a relative rarity.

By contrast, the Xiaomi Mi Note 10 screen is stuck at plain-old 60Hz. In the hands, the difference between these two standards is palpable; it’s tough to go back once you’ve experienced it. In our opinion, this alone is arguably worth a hefty chunk of that £340 price differential.

In short, both AMOLED screens are good, but only the OnePlus 8 Pro display is really good, and capable of competing against some of the best phones out there.

Perhaps the most interesting area of comparison between these two phones is their respective camera offerings.

The Xiaomi Mi Note 10 belies its mid-tier pricing with a whopping 108-megapixel main sensor – the first of its kind, no less. It’s capable of taking shots of incredible clarity. Even with 4-to-1 pixel binning techniques applied, it still outputs chunky 27-megapixel shots.

This is just one of a five-camera setup, but the other four sensors aren’t nearly so impressive. There’s a 12-megapixel 2x telephoto lens, which is good for portrait shots, but the 5-megapixel ‘periscope’ 5x zoom lens isn’t sharp enough for our liking. Even more redundant is a 2-megapixel macro lens, which is all blur and noise. The 20-megapixel ultra-wide is just fine; nothing more.

So it’s all about that main sensor, which produces shots that are bright, rich in color, and beautifully contrasty in decent lighting. When the light dims, it’s not so hot, with a mediocre Night mode and generally noisy results.

The OnePlus 8 Pro features a very different camera setup, one that doesn’t wow as much on paper. In practice, however, it offers a better all-round experience.

OnePlus has opted for a more balanced quad-camera setup that includes a 48-megapixel main and 48-megapixel ultra-wide sensors. That former is the true star here, courtesy of a huge Sony IMX689 sensor and a wide-open f/1.78 aperture, resulting in bright 12-megapixel images that seem to hoover up way more light than your average smartphone camera.

Indeed, OnePlus’s Night mode is super-effective here, even if it isn’t quite in the very top tier. It’s certainly better than Xiaomi’s effort.

Colors aren’t quite as vibrant as those displayed by some flagship rivals, but that gives OnePlus 8 Pro shots a cleaner, more natural look.

Wide-angle shots are pretty good, too, thanks to that high megapixel sensor and OnePlus’s ever-improving image processing. We’d have liked to have seen a slightly sharper telephoto lens than the 8-megapixel variant included, but the 3x optical zoom shots it captures aren’t too bad at all. Conversely, the OnePlus 8 Pro’s 5-megapixel ‘color filter’ lens is little more than a gimmick.

Simply taking and manipulating shots is a much quicker, smoother experience on the OnePlus 8 Pro, partly thanks to its superior processing power, but also because of its cleaner UI. All in all, the OnePlus camera takes better shots across a broader range of scenarios than the Xiaomi.

So far, the Xiaomi Mi Note 10 has quietly shaved a few corners here and there in a bid to hit its mid-market price point, while the OnePlus 8 Pro has gone all out for its premium price tag. But if there’s one area where there’s no hiding the cheaper phone’s limitations, it’s performance.

The Mi Note 10 runs on a Snapdragon 730G CPU, which is both older and significantly slower than the OnePlus 8 Pro’s Snapdragon 865. As such, there really is no contest in this regard.

The Xiaomi’s chip is decidedly mid-range, and it isn’t even top of the middle (an honour that belongs to the Snapdragon 765G). As mentioned, this results in slow camera performance; but it also means that the very top game graphical settings might be off limits, even if the Snapdragon 730G has been tuned to acquit itself well at medium settings.

By contrast, the OnePlus 8 Pro is one of the most capable performers on the market. It flies through tasks such as gaming and multitasking, and the Camera app is suitably snappy.

The entry model of the OnePlus 8 Pro has the same 8GB of RAM as the top Xiaomi Mi Note 10 model, but the OnePlus uses LPDDR5 RAM, which is 30% faster and 20% more power-efficient than the older LPDDR4 RAM of its rival. With the 12GB top model, OnePlus is really stretching its legs.

Going back to gaming, the OnePlus 8 Pro benefits from true stereo speakers, while the Xiaomi Mi Note 10 makes do with mono sound output. The OnePlus also has a potential edge when it comes to network performance in the form of support for 5G connectivity, something the Xiaomi simply can’t match.

We should also highlight the effect that OnePlus’s super-clean, superbly optimised OxygenOS UI has on performance, or at least the perception of it. Together with that 120Hz refresh rate, the phone always feels fast, even when you’re simply scrolling through the Settings menu or flicking between home screens.

By contrast, Xiaomi’s MIUI software is a little flabby and baggy, with too much bloatware and a less appealing style. It’s a lot better than it used to be, and reasonably pleasant to use in isolation. But the OnePlus UI beats it hands-down in virtually every area.

Xiaomi has fitted the Mi Note 10 with a huge 5,260mAh battery, which is way bigger than the 4,510mAh unit that powers the OnePlus 8 Pro.

With the latter’s speedier processor and sharper, more fluid display, you’d think that this was an easy win for Xiaomi. But it doesn’t quite work out that way.

We found that the Mi Note 10 lasted only around a day between charges – which is par for the course, really, and far from bad. But given the expansive battery capacity, and the toll that takes on the phone’s size and weight, we’d have expected a little better.

More importantly in the vein of this article, it isn’t really any better than the OnePlus 8 Pro. For all its bells and whistles, you’ll often get through to bed time on a single charge with double digits left in the tank. Hitting the video hard with OnePlus’s various enhancements activated will drain the tank a little faster, of course, but not calamitously so.

On the charging front, both companies offer similarly impressive solutions. OnePlus includes its rapid Warp Charge 30T charging standard, which gets you from 0% to 50% in 23 minutes, and Xiaomi has its own 30W standard to provide a similarly swift recharge.

One final advantage for the OnePlus is the presence of reversible wireless charging. The Xiaomi is wired-only.

There’s no ignoring the huge price disparity between these two phones. At an initial glance, and even with a little light usage, it’s tough to see how the OnePlus 8 Pro could be £340 better than the Xiaomi Mi Note 10.

We’re not sure that it is £340 better – but we’re convinced that it’s better in virtually every way, and by quite some margin. At a stretch, you might argue that when it comes to design it’s a toss up, with both handsets sporting similarly curvaceous glass-and-metal bodies. But even then, the OnePlus 8 Pro is the slimmer, lighter, and classier looking phone.