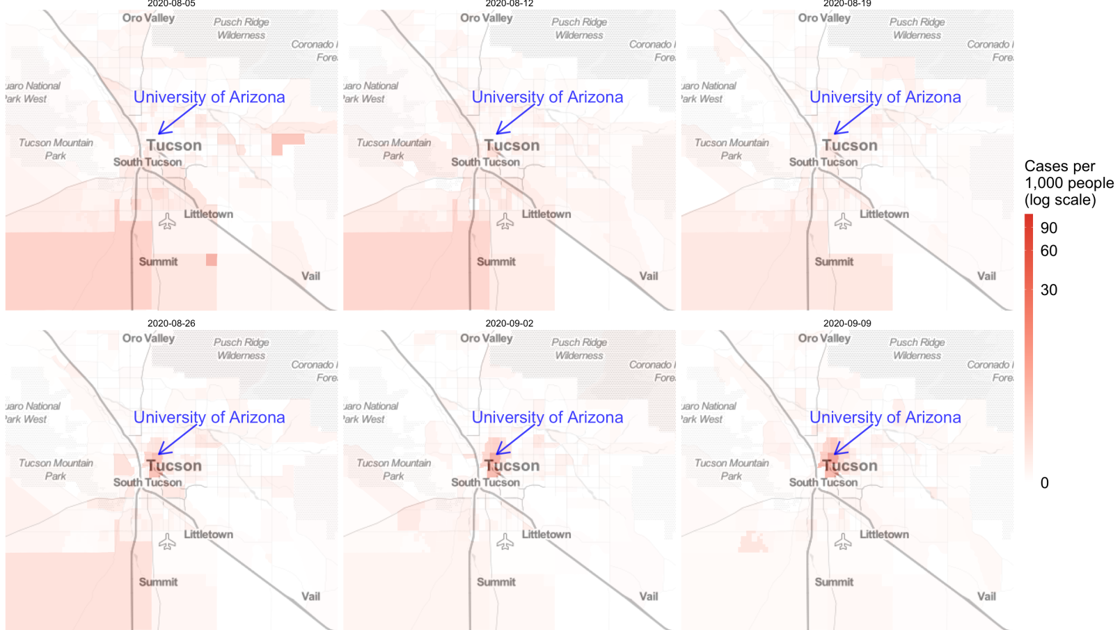 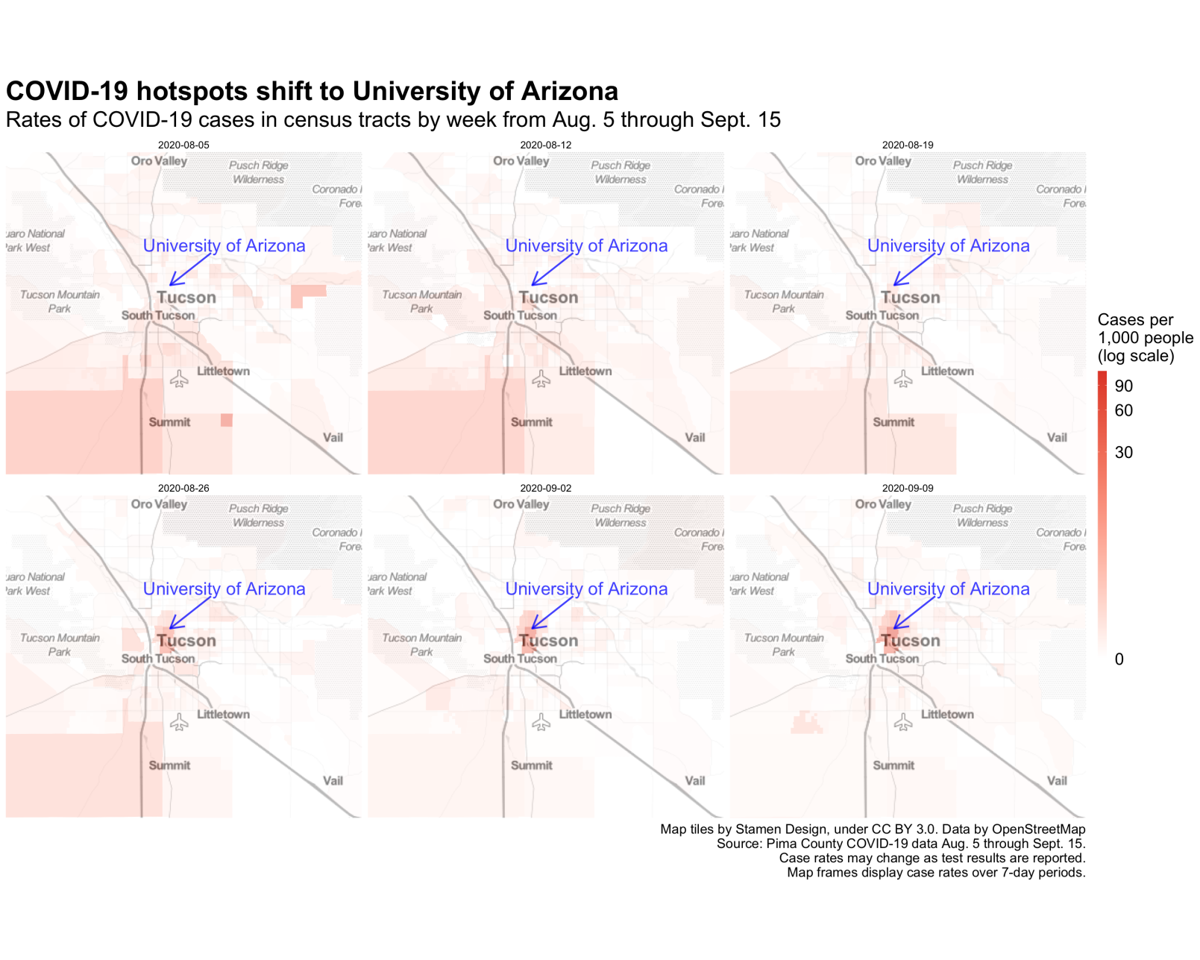 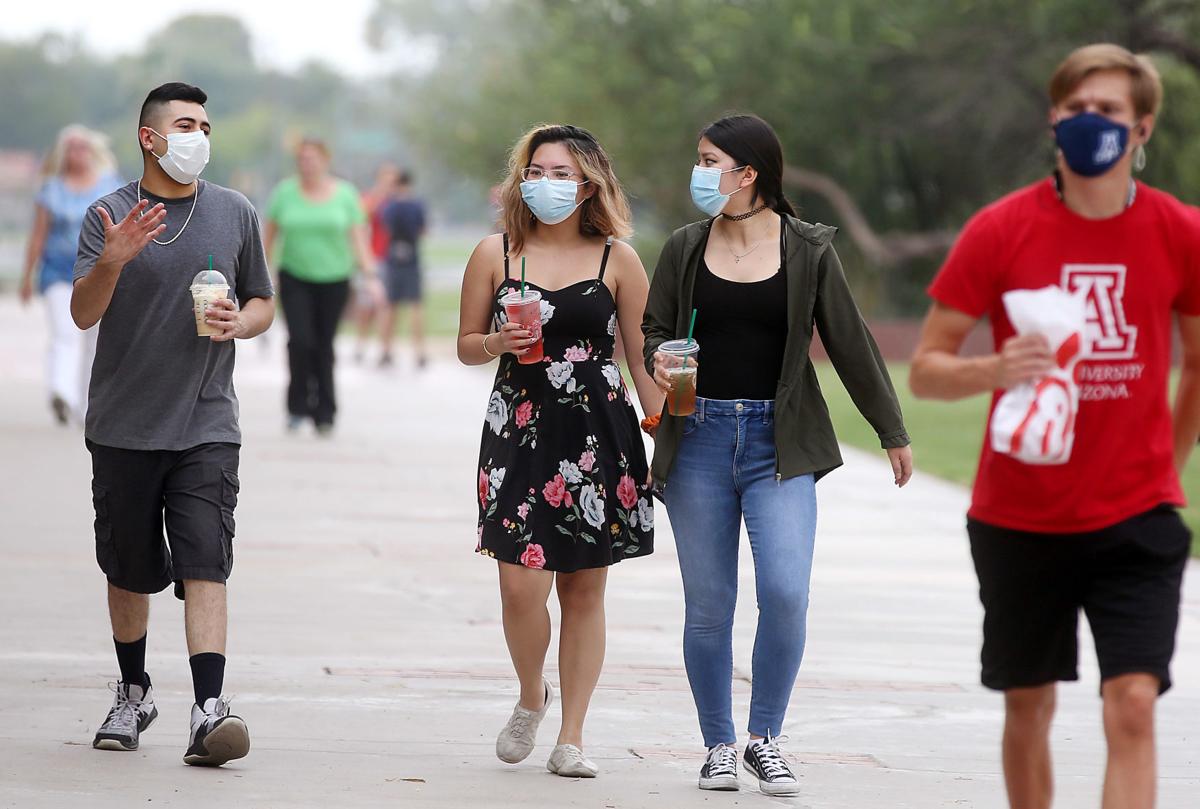 Students at the UA will be reminded of the rules by private security workers like those seen at UA football or basketball games. They will be patrolling in three zones around campus.

The number of new COVID-19 cases are on the rise again in Pima County, but this time public-health experts are able to largely pinpoint the source of these new cases.

“I attribute the uptick in Pima County to the situation on the University of Arizona campus,” said Dr. Joe Gerald, an associate professor with the UA’s Zuckerman College of Public Health. “Our mitigation efforts didn’t work as well as we had hoped.”

The weekly total of new cases reported countywide between Sept. 13-19 was more than twice the amount reported in the last week of August, according to the Arizona Department of Health Services’ chart of COVID-19 cases by date as of Saturday.

At the height of the pandemic, census tracts throughout Tucson saw elevated rates of cases, but the university area has been the city’s main hot spot since the beginning of September, according to an analysis of Pima County COVID-19 data by the Arizona Daily Star.

With new cases tapering elsewhere, Dr. Francisco Garcia, the county’s chief medical officer, said early indications are that they might be surviving the “university bump,” made up primarily of cases among UA students.

“I’m hoping that I’m not just being overly optimistic, but sort of based on what I know is coming from the university this week, based on what we know from the testing that we’ve done, I’m hoping that we will have a week where we actually went down in terms of the numbers of cases,” said Garcia, who cautioned that the reporting lag could change that outlook.

Since Labor Day, data in Pima County show that the cases are overwhelmingly growing the fastest within the 0-19 age group, followed by the 20-44 age group. That’s been the reason why the number of deaths and hospitalizations have continued to stay low, because those age groups are the lowest risk of death or hospitalization.

Other age groups are experiencing different trends, said Dr. Joe Gerald, an associate professor with the University of Arizona’s Zuckerman College of Public Health. “I haven’t seen any evidence that age groups younger or older than 15 to 24 are doing anything but continuing to decline, albeit kind of slowly now.”

Cases are mostly in clusters of student housing, whether it’s dormitories, off-campus apartments or Greek houses.

“If you take those cases out of the mix, we would be, actually doing pretty well,” Garcia said. “The bottom line is that even though we do have this isolated set of clustered cases in and around the UA, I think the other parts of town are in pretty good shape.”

The biggest concern, Garcia said, is the continued risk of community transmission.

“That’s the real reason we push so hard, work so hard with our university partners to get them to institute the stay-at-home orders because we know the potential is there to cause damage to other parts of the community,” he said. “Despite the fact that our numbers look ugly, that’s part of the reason I still feel like we are potentially not in horrible shape.”

Asked about a shift in new cases being clustered around the UA, as opposed to other areas where clusters were seen previously, such as the south side, Garcia said that it’s just “fewer in relative proportion.”

But he did say it shows success in mitigation efforts in those previously hard-hit areas, such as targeted mobile testing and mask-wearing.

Garcia said there’s one more thing to watch in the next week: whether Pima County will move into the “substantial” transmission category that is used for the state’s evaluation of whether schools or businesses can stay open.

He said that the expectation, since the factors are based on two-week delays, is that the county will be OK, keeping public schools on track to open with hybrid learning.

“Fortunately, we’ve been able to dodge the worst consequences, which would be severe cases amongst the students or spillover into the community,” Gerald said. “So we got lucky, I think.”

Sign up now to get the most recent coronavirus headlines and other important local and national news sent to your email inbox daily.

Every day, we seem to have more scientific data about what type of actions best protect us (and others) from COVID-19. Researchers from Duke U…

When people who are infectious with SARS-CoV-2, the virus that causes COVID-19, sneeze, talk or even just breathe, they emit aerosols carrying…