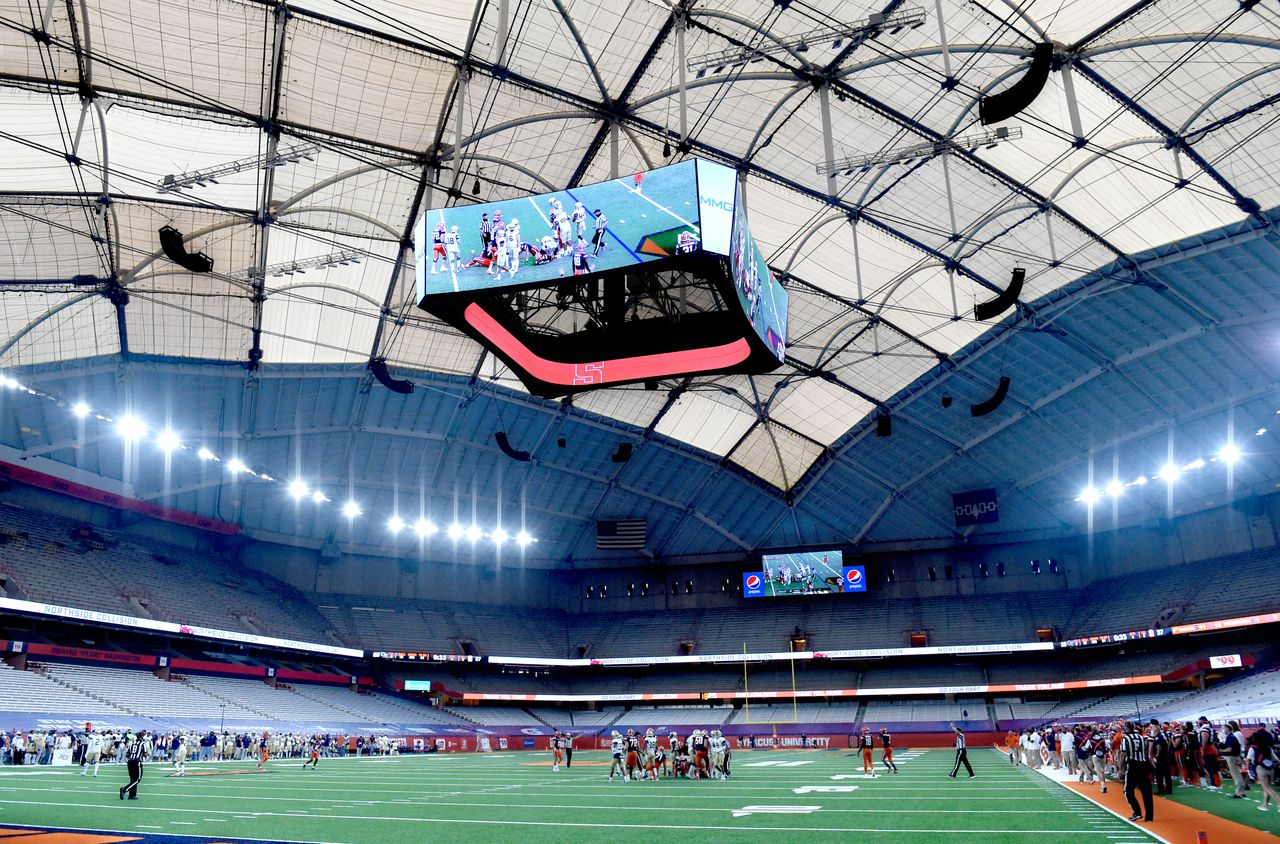 Syracuse, N.Y. — Those arriving to the Carrier Dome for Syracuse’s football game on Saturday morning entered through a door that was propped wide open and left unattended.

The door was propped open to help limit the number of people touching the handle and limit potential spread of the coronavirus. And it was left open because it finally could be, as Syracuse moved on from the old-fashioned air-supported roof to a more modern system.

The school debuted the $118 million renovations to the Carrier Dome on Saturday during a 37-20 win over Georgia Tech. And the school debuted it without fans, making it a rather strange day of celebration.

“We got to see it Thursday morning and it was super, super impressive,” Syracuse football coach Dino Babers said. “It was nothing but wows from me and all the players. To come into this place, a little disappointing to open it without the community and the student body. But it’s a special place and I can’t wait to share it with you.”

The upgrades included the replacement of the air-supported roof and the addition of a new center-hung scoreboard and new sound and lighting systems.

Babers and his team were among the first to see the final product, taking a tour of the facility on Thursday morning. They marveled, as most Carrier Dome regulars will, at the new center-hung scoreboard, one of the largest in the country.

Syracuse athletic director John Wildhack promised it would bring a “wow factor” to the building and the scoreboard does, providing a massive upgrade for any fan who visits regularly. It commands the attention of the entire stadium. It’s so big that those in the front row might have to strain their necks.

“My first time seeing it, when we walked in, I felt like I was a recruit again and it was my first time seeing the Dome,” star defensive back Trill Williams said. “It was a great experience. My favorite part is the Jumbotron. Sometimes I get caught looking up and it’s like, ‘Oh yeah, gotta focus.’”

The scoreboard provided images and replays on Saturday and was surrounded by speakers and lights that provide improvements of their own. The public address announcer no longer sounds like he os submerged in an underwater tank. The new lights provided a crisp brightness.

The school blared music and pumped in an artificial crowd, aiming to make the atmosphere feel as normal as possible during a strange time. It all sounded good.

Rather than ringed with fans, the front row of the bleachers was covered with a blue tarp that featured advertisements for items like Muscle Milk, Labatt and Dunn Tire. There is still work to be done over the next couple of years. Some bathrooms have been upgraded. Some troughs remain. Some areas can be air-conditioned. Others can’t.

The school showcased a ring of honor across from the press box and featured the names of Jim Boeheim, Ernie Davis, Floyd Little and Dwayne “Pearl” Washington, painted on the walls. The team’s bowl appearances were commemorated near the top of the building where the roof connects to the sides.

The school still hasn’t lit the Dome up at night, and it’s unlikely it pulled out all the stops for a home opener that lacked the most important piece: The thousands who make the building roar and groan, gasp and explode.

There was no light show quite as impressive as the one Syracuse players posted on their Instagram pages from their sneak preview.

The building never got particularly dark thanks to the natural sunlight coming in from the new roof. There was no especially dramatic display of theatrics before the team entered the field.

Perhaps that was because the game was delayed 30 minutes and the teams returned to their locker rooms as three Syracuse players were re-tested for coronavirus. Perhaps they’re just waiting for the final piece.

“It’s amazing,” Babers said. “You’re going to love it and it’s going to wow you to death when you get a chance to see it.”

Best and worst from Syracuse’s win

The key to igniting the Syracuse offense: Sean Tucker and the run game gets revved up (instant takeaways)