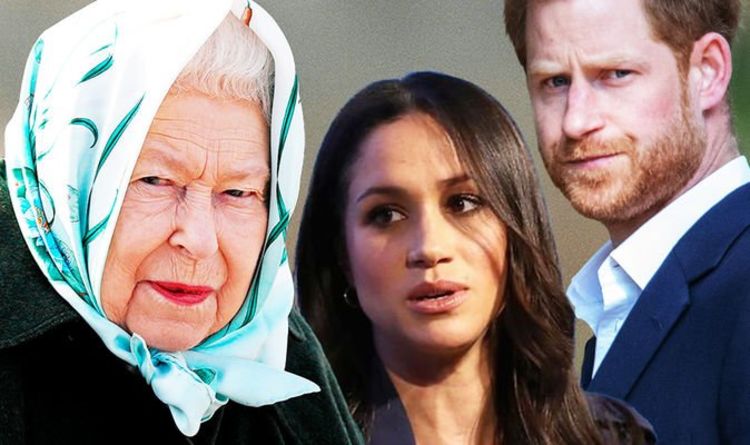 The Queen could sever royal ties with Prince Harry and Meghan Markle, according to royal biographer Angela Levin. Ms Levin told talkRADIO that the couple’s latest intervention in the US presidential election could be the final straw. This comes after reports from royal aides today the political stunt may have violated the couple’s Megxit agreement with Buckingham Palace.

In the video message with Meghan, Prince Harry urged US citizens to “reject hate speech” and vote in the country’s upcoming presidential election.

A spokesperson for the couple said the comments did not refer to any specific political party or candidate, but were instead “a call for decency”.

It was their first joint TV appearance since they ceased being working members of the Royal Family in March.

Given the past notorious animosity between the Duchess of Sussex and President Donald Trump, the broadcast was seen as the royal pair’s implicit endorsement of his rival, Joe Biden.

Ms Levin, who wrote a biography of Prince Harry, said that the royal family will likely move to cut ties with Harry and Meghan next March.

Radio host Julia Hartley-Brewer asked: “Do you think the moves will now go ahead for removing the Duke and Duchess of Sussex titles, and the HRH titles from them?

“So, not just making them non-working royal members, but non-royal altogether?”

Ms Levin responded: “At the end of the March next year is when they are meant to review their arrangement with the Queen.

“I am quite convinced that this is when they will have to leave all their titles and royal membership behind.”

The couple’s latest intervention in the US presidential election could be the final straw (Image: GETTY)

“He was sitting on that bench, looking as if he was imprisoned, because Meghan moved right up to him so he had very little room to move.

“When she turned to him, to listen to him saying things about online hatred, she looked so harsh, that if he doesn’t get it right, he will be in trouble later.”

The intervention is likely to hinder Harry’s chances of renewing his connections with the military posts (Image: IG)

She added: “They say they want privacy, but they are forced on us at every turn. Every little thing they do. They must have a huge team of PR people flooding the press.

“The election is important because it’s not his business. He is still a royal.

“He represents the UK. He can’t go over there and say this. His staff said he didn’t mean anyone in particular but, remember, he was sulking when Trump visited the Queen in Windsor.”

Reports today suggest the intervention is likely to hinder Harry’s chances of renewing his connections with the military posts he holds dear, such as the Royal Marines.