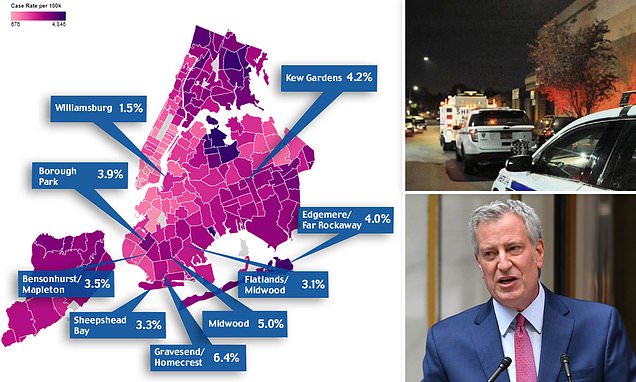 Health officials warned about the emergence of COVID-19 clusters in several zip codes last week, saying that they would begin rolling back reopenings in affected areas as early as Monday if the numbers don’t improve.

‘This may be the most precarious moment that we’re facing since we have emerged from lockdown,’ Dr Dave Chokshi of the Department of Health & Mental Hygiene told a Friday press briefing.

‘We will move as swiftly as the situation warrants. If this growth continues, it will turn into widespread transmission potentially citywide.’

Nine neighborhoods are said to be on the list of high-risk zip codes that could see ‘an immediate scaling back of activities’, which may include bans on gatherings of 10 or more people, mask fines and the closure of non-essential businesses.

The highest increase in positive cases was seen in the Gravesend/Homecrest area in south Brooklyn, where the positivity rate hit 6.42 percent on Friday.

At least nine New York City neighborhoods could face new lockdowns as coronavirus infection rates surge in parts of Brooklyn and Queens. The graphic above shows the positivity rate in those nine neighborhoods

Another Queens neighborhood, Woodside, caused concern over the weekend after police broke up a wedding of nearly 300 people who were not complying with state and city coronavirus restrictions.

Deputy sheriffs arrived at Royal Elite Palace Caterers on Garfield Avenue just before midnight on Friday night and found about 284 people inside – exceeding the state limit of 50 people at social gatherings.

The sheriff’s office said a live band was playing and food and alcohol were being served while guests ignored social distancing guidelines.

The crowd was ordered to leave the event hall immediately, and the owner and manager of the venue were ticketed for misdemeanor offenses.

Royal Elite owner Aba Cohen was cited for violating the mayor’s emergency coronavirus measure and unlawfully altering the nature or character of a business.

Woodside was not among the nine neighborhoods at risk of new lockdowns.

The health department has said it is keeping a close eye on six neighborhoods – Borough Park, Midwood, Bensonhurst, South Williamsburg, Far Rockaway and Kew Gardens – which account for around 20 percent of cases around the Big Apple.

Despite surges in those areas, New York City’s overall infection has remained low, hovering around one percent.

NYC zip codes with the most coronavirus cases

New York Governor Andrew Cuomo raised the alarm about the potential for spikes on Saturday after the state recorded more than 1,000 new positive cases – the highest daily number since June 5.

Cuomo said there were 1,005 positive cases tallied on Friday out of 99,953 tests, for a one percent positive rate.

From late July through the start of September the state was seeing an average of around 660 people test positive per day. In the seven-day period that ended Friday, the state had averaged 817 positive tests per day.

However, that number of daily positive tests in a state of more than 19 million people still puts New York in a much better position than many other states.

Mayor Bill de Blasio warned of potential new lockdowns in neighborhoods with surges at a press conference on Friday, saying: ‘It’s something we have to address with a very aggressive public health effort right away.’

Many of the neighborhoods identified as having troubling infections rates include high proportions of Jewish residents.

Robocalls in English and Yiddish and sound trucks will urge residents to physically distance and wear a face covering, Katz said.

Health officials sought to clarify the latest developments at a press briefing in Brooklyn on Friday that was interrupted by an Orthodox Jewish man, radio host Heshy Tischler, who branded officials liars and compared them to Nazis.

Tischler was repeatedly asked to wear a mask but refused as he interrupted the conference until it was eventually called off.

He was joined by a man The Gothamist identified as Borough Park resident Heshy Brach who also shouted at city officials and told them to go back to their own neighborhoods.

‘Go to East New York,’ Brach said Friday as he confronted the officials. ‘I’ll bring you some n****rs, I’ll throw you some rocks. You want antifa here?’

‘All you have is your violent Nazi storm troopers coming in here,’ Tischler said

Tischler began shouting at Chokshi as soon as stepped up to the microphone.

‘Forty percent of the tests are incorrect number one,’ Tischler said.

‘You’re saying it’s tripled but if you come to any of my two hospitals in the neighborhood, there’s one coronavirus patient. Where are all these people? Maybe we’re at home maybe, we’re hiding them somewhere in the basement so you can’t see them but I haven’t seen them.

‘You and I know that 40 percent or 50 percent of test results are wrong so your update numbers are wrong,’ Tischler continued.

‘How come I don’t see you at testing booths all over? Instead all you have is your violent Nazi storm troopers coming in here. I’m gonna say what I want and they’re coming in to violate us.’

The radio host recorded the whole altercation on his phone, as did Brach who then interrupted after a member of the city’s team tried to give him a mask to wear.

‘Get away from me if you don’t like it,’ he answered.

‘Go home go to your nice house somewhere. It’s my freedom I don’t have to wear your mask.’

Many of the neighborhoods identified as having troubling infections rates include high proportions of Jewish residents. Three members of New York City’s Orthodox Jewish community died from COVID-19 just hours after presenting at the Maimonides Medical Center in Brooklyn (pictured) last week

Mayor Bill de Blasio also noted the uptick in those neighborhoods and stated: ‘It’s something we have to address with a very aggressive public health effort right away’.

In his own Friday press briefing, Mayor de Blasio warned that new lockdowns could include the closure of schools in affected neighborhoods.

At least 150 district employees have already tested positive for the virus, including 108 who came in contact with infected colleagues, according to the New York Post.

The city’s Department of Education has refused to disclose the total number of teachers and administrators who have been quarantined for 14 days since returning to school buildings on September 8, but the Post came up with its estimate based on reports from teachers themselves.

At IS 51 Edwin Markham in Staten Island, about 70 staffers have been forced to quarantine until October 1, a source told the outlet.

The DOE had previously admitted that 50 IS 51 staffers had been told to isolate, and blamed the outbreak on employees ‘disregarding social distancing protocol’.

Principal Nicholas Mele condemned that assertion as ‘completely untrue’ in a statement on Friday.