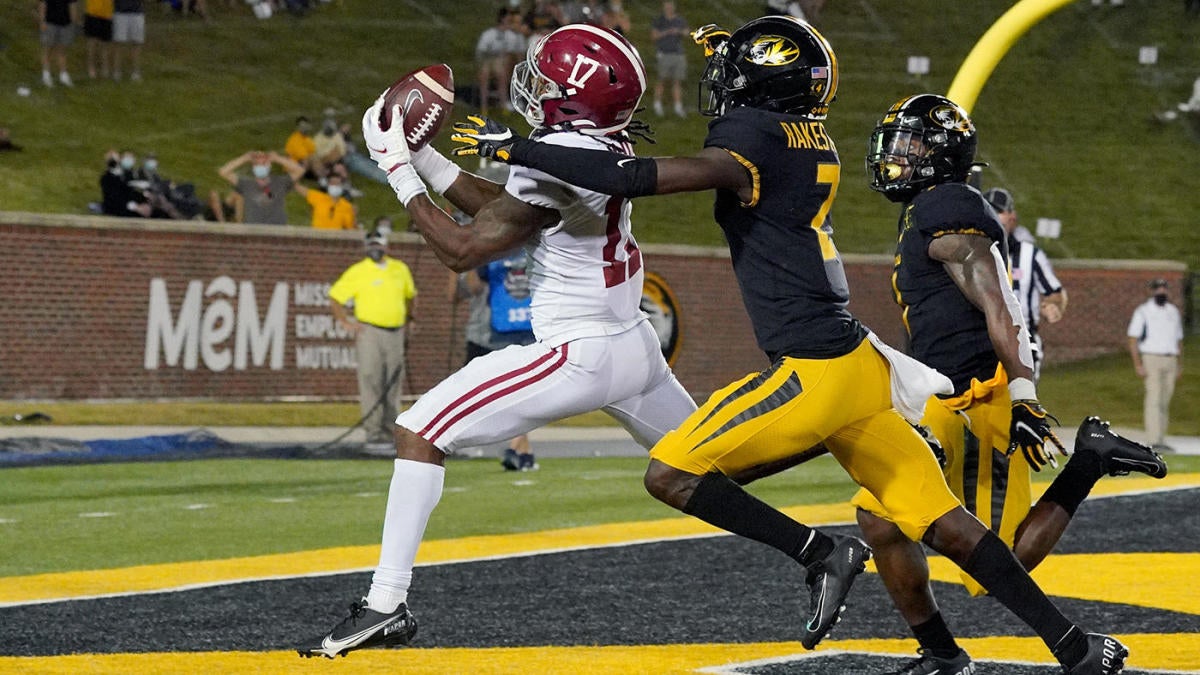 No. 2 Alabama didn’t have much trouble getting its first win of the season, disposing of Missouri 38-19 on the road Saturday night. The Crimson Tide jumped out to a 28-3 lead in the first half before taking their foot off the gas a bit in the second half to cruise to their first win of the delayed 2020 college football season.

Alabama finished the night with 414 yards of offense as a team. Wide receiver Jaylen Waddle quickly eased any fears about how the offense would replace Henry Ruggs and Jerry Jeudy, catching eight passes for 134 yards and two touchdowns. His receiving partner, DeVonta Smith, had the quieter night with eight receptions for 89 yards, while running back Najee Harris led the ground attack, rushing for 98 yards and three touchdowns on 17 carries.

Here are the four key takeaways from a comfortable Alabama victory.

1. Alabama is the team to beat in the SEC West

Listen, we’re through the first week of the SEC season, so to make grand judgments on what we’ve seen so far is somewhat idiotic, but I’m just idiotic enough to do it. Alabama is the best team in the SEC West. If you look around the division on Saturday, you saw Auburn struggle with Kentucky and defending champion LSU give up roughly a billion yards against Mississippi State. And while MSU beat LSU, it still allowed the Tigers to put up a bunch of points and yards in the process. Georgia didn’t show up for more than a half, and Arkansas still managed to lose to it by 27 points. Then there was Ole Miss and its defense, which was as friendly as ever in a loss to Florida that saw Kyle Trask set all kinds of records.

Then there’s Alabama — talented, dangerous, efficient Alabama. The true North Star of the SEC. In a weekend where everybody in the SEC showed weakness or looked rusty (as you’d expect) for a while, Alabama just dominated Missouri from start to finish. Now, I’m not here telling you that Alabama is going undefeated. It’s going to be difficult for any team to do that this season, even Alabama. But I have a hard time imagining that anybody within the West will finish with a better record.

He’s not the top-of-his-class five-star recruit that he’s had to share a QB room with the last few years. He’s not likely to be a first-round NFL Draft pick. But you know what? Jones might be an NFL quarterback! Sure, it helps to have a lot of talent surrounding you, but he looks smooth when he’s on the field. He might not make the spectacular play like Tua Tagovailoa did from time to time, but he seldom makes the wrong play. Jones finished his night in the third quarter after throwing for 249 yards and two touchdowns. He completed 75% of his passes while averaging 10.4 yards per attempt. He put up the same kind of stat line we saw from Tagovailoa time and time again.

Five-star freshman Bryce Young took over late but only solidified Jones’ hold on the starting job. Young is talented but looked every bit the freshman making his first college appearance. He completed 5 of 8 passes for 54 yards, but he also fumbled the ball away while taking a sack to end his first possession. His second possession didn’t go anywhere before Alabama had to punt. Then, after Mizzou muffed the punt and set Alabama up in the red zone, Young missed his target on what would have been a touchdown with an accurate throw. You could see the flashes of what makes Young special, but he didn’t look like he’s ready to challenge Jones for the starting job yet. And that’s fine because Alabama doesn’t need him to.

It’s nearly impossible to quantify the impact losing Moses had on the Alabama defense last season, but the star linebacker didn’t need much time to remind you of his immense talent. Moses only had four tackles on the night, but two of them were for a loss, and he was flying all over the field. Even on the plays he didn’t finish with a tackle, he impacted the play by taking a gap away or forcing Shawn Robinson to hurry a throw. He looked healthy and effective.

4. Eli Drinkwitz has work to do at Mizzou

You didn’t need psychic powers to predict that Missouri’s offense would struggle on Saturday. It’s a team with a new coach, implementing a new offense with a new quarterback in the first game of a season after not having spring practice or a typical training camp. Oh, and to turn the difficulty notch up another level or nine, they had to do all this against Alabama. The results were about what you’d expect given those caveats. The Tigers finished the night with 322 yards of offense, which isn’t terrible, but 132 of them came in the fourth quarter long after the game’s outcome had been decided.

A lot of how well this will work in 2020 depends on QB Shawn Robinson. Against Alabama, Robinson reminded me of the guy we initially saw at TCU. He’s incredibly talented and is more than capable of making plays that make you ask, “Wow, how did he do that?” The problem is he also has the capability of making you ask, “Wow, why did he do that?” He finished the night completing 76% of his passes but averaged only 7.4 yards per attempt en route to 185 yards. Still, at times, he did an excellent job of buying time in the pocket with his legs before finding a receiver. Other times, he panicked and did things like this. If Drinkwitz can figure out a way to work those kinds of plays out of Robinson, he’s good enough to make Missouri dangerous. If he can’t, I wouldn’t be surprised if we see Connor Bazelak take over at some point.

CBS Sports was with you the entire way updating this story with analysis and highlights from Alabama at Missouri. Check them out below.

TD Mizzou! Bazelak runs it in for the score on the final play of the game. A significant score for anybody who bet the over.

Nice play by Bazelak on 3rd down. Under pressure, steps up in the pocket to avoid it and finds an open receiver for the 1st.

Bazelak back in for Missouri.

And Mizzou muffs the punt. Alabama recovers at the 18.

Mizzou’s defense has fared a lot better against Bryce Young than Mac Jones. Last drive brought a turnover, this one brings a punt.

Evan Neal back in for Alabama.

TD Missouri! Shawn Robinson hits a wide-open Badie for a 54-yard score. It’s not going to change the outcome, but it’s better than not scoring at all.

Bryce Young is stripped by Williams and Mizzou recovers. He’d been off to a nice start, but that’s a learning moment and a reason to feel good if you’re Mizzou.

If you were wondering if Bryce Young is any good: Looks like it!

Bryce Young’s first college snap is a hand off. It was a 5-star hand off.

Looks like Bryce Young is about to make his Alabama debut.

Shawn Robinson is sacked for a loss of 16 yards on 3rd down. He had no prayer, and I was kinda scared when his helmet popped off cuz I couldn’t be sure his head wasn’t inside. Anyway, Mizzou settles for another FG. It’s 35-6.

We’ve got a 1st and goal for Mizzou!